This morning, at breakfast, I stunned myself by not feeling like having cereal or oatmeal, one of which I’ve had for breakfast every day for the past… LONG TIME!

So I made myself a nice Thomas’ whole wheat english muffin (which I officially love! They don’t exactly taste like a regular english muffin, but they do taste like white bread! No wheatiness! I mean, I love fiber and I love the taste of whole wheat… soooooometimes, but at the same time, I’m not even gonna pretend that I never just want to eat an entire loaf of white bread. But this has that nice mildness! excelente!)

I topped it with the other half of the barney butter… well, “half”. Apparently I used a lot more than half last time! Hahaha oh well, the muffin was so good on its own that it didn’t need tons of topping. 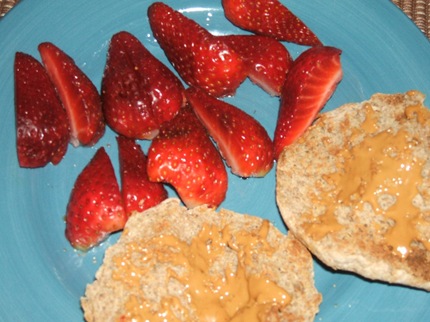 And of course more gorgeous strawberries. They’re on sale again this week! Yesss! I can get more! (I still have two of these left).

But anyway, that left me kind of hungry and was lower in calories so… I had a wee cereal chaser. 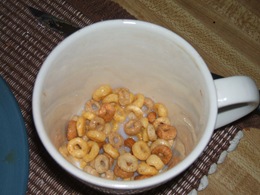 For my lunch, I wanted to make it in advance cause I have class from 9-2 with a break at 11, and I’m always STARVING once I’m out at 2, so I use my tea break to make lunch so it’s quick and easy. I started with a TJ’s whole grain wrap and some more of my yummy cilantro hummus. 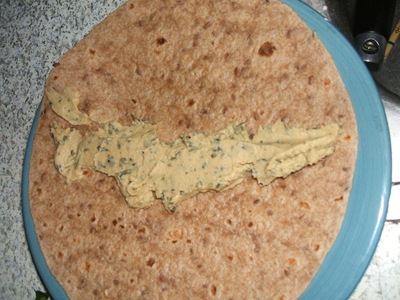 Then I roasted up some veg! 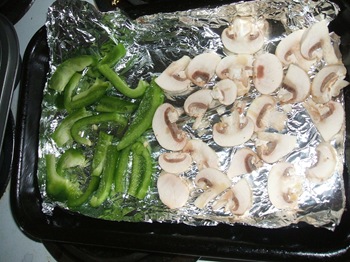 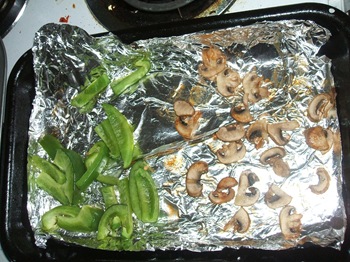 I actually took out the shrooms first and roasted the peppers a little longer. The mushrooms I tossed with a wee bit of olive oil, that’s why they’re extra brown and gorgeous!

Here’s everybody on the tortilla, along with the last of my spinach. 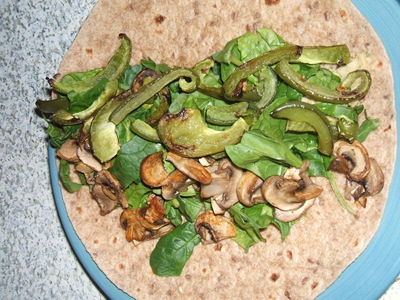 So I threw that in the fridge to have for later, and to snack on in class so I woudn’t be staaarving I brought this 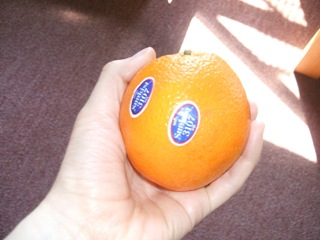 Which was especially sweet and juicy! A little messy, but whatevs.

Then I came home and my lunch was a breeze to throw together! My wrap and a peach yogurt, along with some seltzer. 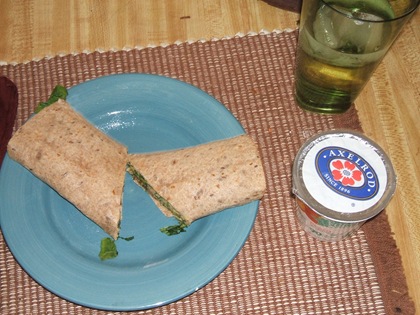 I nuked the wrap to get the chill of the fridge off it, and it made it soooooooooooooo tasty and oozy! Especially the lovely herby hummus. The combination of flavors in this was just spot-on. Roasting vegetables is MAGIC! 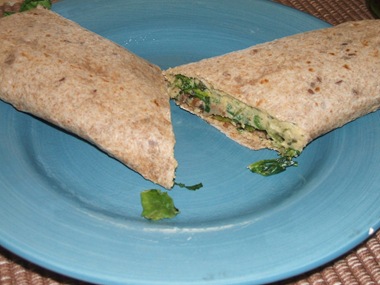 Now I’m a little irked cause it was gorrrrrrrgeous out when I was stuck in class, but now we have a storm moving in :( And I’m just tired, it’s been a long week. I see another of the muffins in my near future, and perhaps some yoga!