There are a lot of kashi shoutouts in this post. They should definitely send me lots of delicious free products for getting them all this good publicity!

Going back to last night, I had a nice comfort food evening snack: 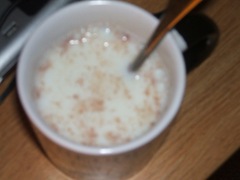 Warm milk! I wanted a good night’s sleep, so I tried to get some tryptophan in. As a kid I’d have it with nutmeg and sugar, and lately I’ve been having it with cinnamon (cause I don’t have nutmeg) and Splenda, but I’m sick of using Splenda. I’m not fat! I’m allowed to put caloric sweeteners in stuff! My aunt is a fan of warm milk and honey, so last night I had that, and it was yummy! 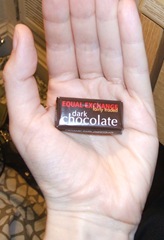 I also got a free fair trade chocolate sample. WOW it was good. The brand was Equal Exchange, if anyone’s curious (another free endorsement!)

And then, feeling a bit low on protein (and calories in general) for the day, I had a handful of trail mix. A handful! In my hand! I didn’t measure! That was a personal triumph.

On to today: breakfast was a classic- peanut butter and banana oats. SO GOOD. 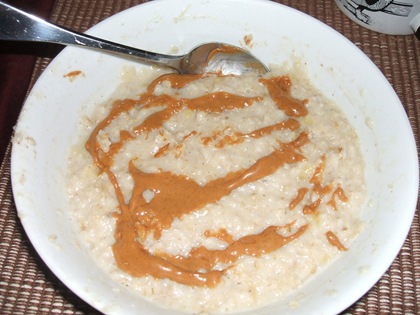 But since I like to mix it up with the temperatures of my food, I wanted something fresh and cool after hot oatmeal and hot tea. So I had the first of my new box of strawberries! This box is just as delicious! Hurray for strawberries in the springtime! 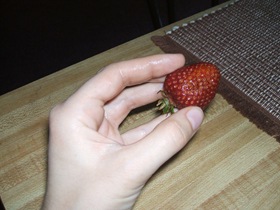 Okay, so onto the Kashi lovin’. I was feeling really hungry a few hours after breakfast, so I had half of this: 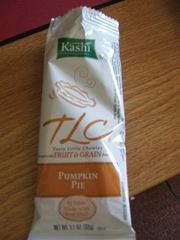 Look how cute it is! The spices are really yummy, too, and it makes for a nice crunch. And the coating on top, which I guess is the “pumpkin pie” part, tastes mostly like dates-- which makes sense as they’re one of the main ingredients-- and spice. But I like dates and spice! No complaints here! 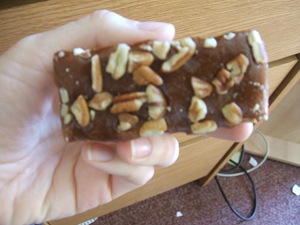 This will be lunch: 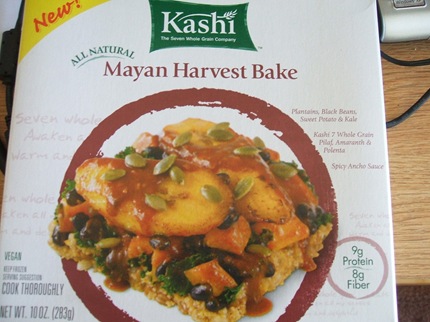 I signed up for a free coupon when Kashi was doing an online promotion for these, and I’ve heard rave reviews about this particular one on the internet! The component I’m most excited about is the ancho chili sauce! Well actually and I want to try amaranth, because it’s a whole grain but supposedly tastes like grits and oh. em. gee. I love grits! Well, and I’m really stoked about the plantains… oh sweet, sweet plantains. Yeah, they were the reason I bought it. The nutritional statistics are very very good on this- as you can see, 9 grams protein and 8 grams fiber. However, it’s a wee bit small for 340 calories, and it still has 360 mg. of sodium, which is definitely lower than some TV dinners but is still plenty high. So I’ll watch my sodium the rest of the day. And to accompany, I’m going to have an orange! More mixed temperatures, excellent.

For my work snack, I’m thinking dairy, so probably I’ll have a yogurt.