Today was kind of a weird food day, like all Sundays. As a result, I spent a lot of it feeling kind of out of sorts. That’s the annoying thing about healthy eating- when you are used to eating great and feeling great, when you mess with your usual routine you feel NOTICEABLY worse.

In general, and I’m not really talking about today anymore, just something I’ve noticed in general, I kind of wish I could splurge more than I do. However, I find that if I eat some yummy delicious dessert one night, I can literally see it in my stomach the next morning, and I just feel gross. I thought 20-year-olds got to get away with that stuff! That’s what older people are always complaining about! My gawd, it’s just going to get worse! Bums me out.

Do other teens/twentysomethings find the same thing? Is it possible that if I ate slightly LESS healthfully and routinely, that I could get away with my occasional splurges BETTER?!

Today I really wasn’t “bad”, per se, anyway, but I am turning such a creature of routine this semester (with my work schedule, in particular, I have really consistent times for when I wake up/do active stuff/do desk stuff/eat meals/etc. etc.) that it really does throw me when I mix it up.

I did indeed eat something roughly 10 minutes after declaring in my last blog that I thought I was still hungry. I had the last of my homemade muffins, topped with cran-apple butter. I had a lot of grainy carbs in not a long period of time today, but my rationale was that I’d missed out on my usual morning cereal/oats, and that I’d need fuel for the gym. 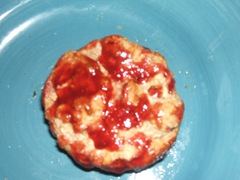 Then I went to the gym and wasn’t feelin’ it and didn’t stay very long (I absolutely listen to my body in those situations- I still did a lotttt of walking today, it is just incidental to living in Boston) so then I went to buy groceries (the pineapple on sale was sold out :( but more strawberries! huzzah!) and then… they had a free sample of cookie, and I had a bit and it was just… not what I should’ve had to replenish my energy.

And then I just felt bad, and I didn’t feel like having something with protein or fiber to get my blood sugar and so on stabilized again, so I just took an eating break and did work. Unfortunately, when I feel out of sorts, my tendency is to just quit eating. It’s not a good technique! Don’t do what I do!

But then tonight I got back on track. I’d been planning various things and getting progressively more and more stressed, but I decided to just eat what I wanted. Which was a big plate of plants! This was seriously delicious and seriously revitalizing. 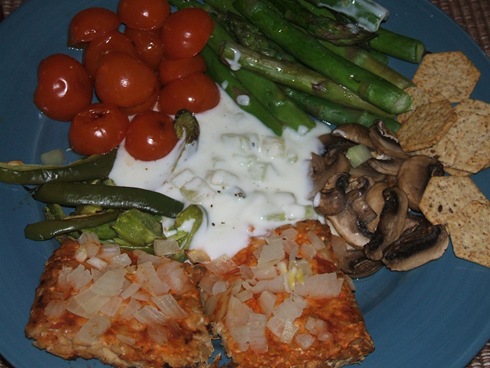 Going around clockwise, we have gorgeous cherry tomatoes (on sale), gorgeous asparagus (on sale, OH MAN. The first asparagus of the spring. There is nothing better! Asparagus is the best!), a few TJ’s whole grain crackers for crunch, shrooms, tempeh with barbecue sauce and onions, and green peppers. In the center, more tzaziki made with TJ’s nonfat Euro yogurt, cucs, salt and pepper, and lemon juice.

For anyone who may be interested in process and technique, first I marinated the tempeh in the BBQ sauce and onion. Then I threw that in the oven at 400 degrees, wrapped in a foil packet. Then I steamed the asparagus and drizzled on some olive oil and lemon juice, and let them cool on the plate (I think asparagus tastes best cold or room temp). Then I sliced the green peppers and threw them on a baking sheet, and threw them in the oven with the tempeh. Then I sliced the shrooms, tossed them with some olive oil, and threw them on the baking sheet. Then I took out the shrooms and the peppers weren’t done, so I halved the tomatoes and threw them on the baking sheet. Those finished cooking, I took em out of the oven and mixed up my tzaziki. And all was served! I ended up not eating dinner til like 8:30 as a result!

Butttt… my big plate of plants made me feel MUCH better!