I know this is overdue, but there were complications. It will also be my only post for the next few days, because I left my camera cord at home.

Get stoked! Me and my mom make the best baklava on Earth! 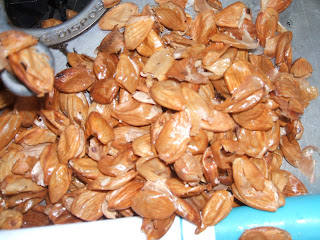 Then put them on a cookie sheet, and into a 200 degree oven for just a few minutes until they’re not wet anymore (DO NOT TOAST THEM!). 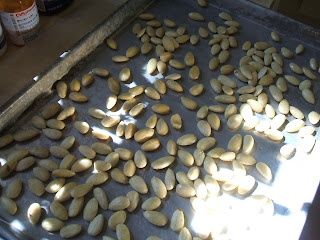 Then grind ‘em up in a food processor, til they look like this. Then grind up a pound of walnuts, til they look like this: 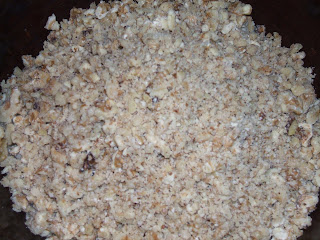 Then add 1 cup of sugar and 2 tsp of cinnamon, and stir to combine. 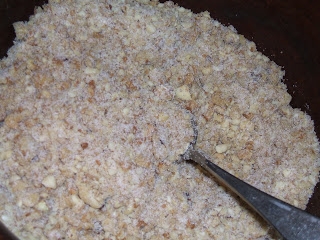 Butter time! This is not a low butter recipe (but, I did not use all the butter you see here, do not worry!).

Melt a whole bunch of butter (my mom told me to use three sticks, but I was using the butter for the lamb, too, and I still didn’t need that many- 2 is sufficient, and you’ll probably have extra). Melt it in the microwave so it separates, like so. 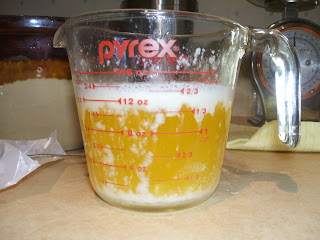 Then clarify it by skimming (as many as you can) the whey solids off the top. 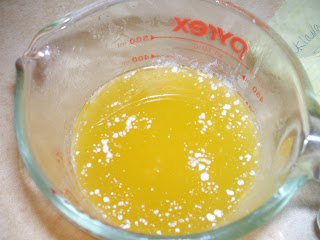 Then get your phyllo! This is the kind we use. We got a pound (well actually my mom got two because she likes to plan for contingencies, but we used less than a pound.) 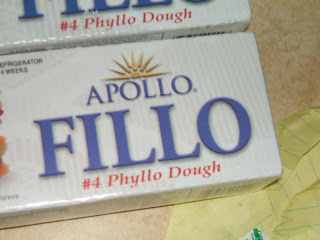 Phyllo is mad thin! You want to take ONE LAYER AT A TIME. 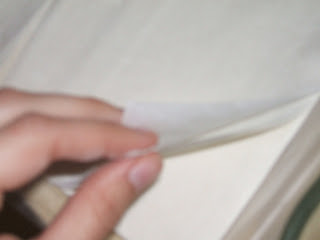 Take your hugest Pyrex (this one is 10 by 15). Coat the bottom with melted butter (use a pastry brush- this is an essential tool of the baklava chef). Now fold a single sheet of phyllo in half, and put it in one corner, all the way at the edge, like so: 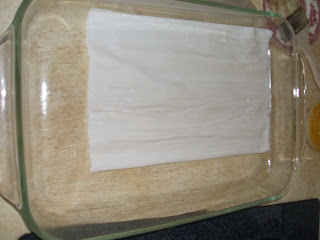 Then brush with butter. Then add 5 more sheets of phyllo, folded in half (so six total for this layer), overlapping them so the entire bottom gets covered, brushing with butter after each sheet. You’ll end up with something approximating this: Then sprinkle on 1/3 of your nut mixture. 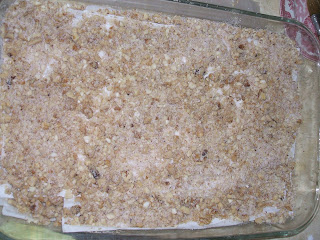 Then repeat the layering process.

Your next layer will be only three sheets of phyllo, folded in half, overlapped over each other to cover the whole pan, brushed with butter each time you put down a new sheet.

Then another third of the nuts.

Then another layer of three.

Then the last of the nuts.

Then another layer of 6.

Then it’s time to cut! Get your SHARPEST knife. My mom starts with the diagonals. 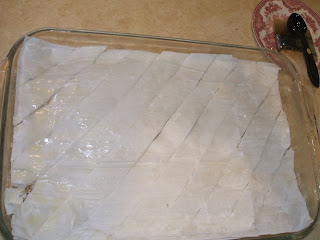 Then once you have done your diagonals, you want to cut straight up and down. This is THE trickiest part of the process. As you can see, you have to hold the layers down as you do so. 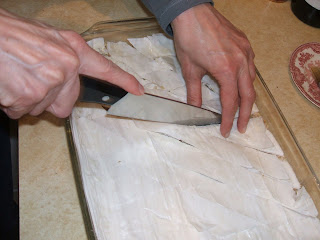 Once that’s done, you’ll have pretty diamond shapes. You want to spear the pastry together (think of stabbing a thick sandwich) with whole cloves, one in the center of each, like so: 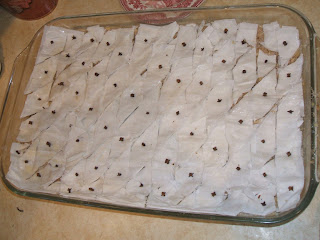 Before the baklava goes in the oven, do a final drizzling of butter, 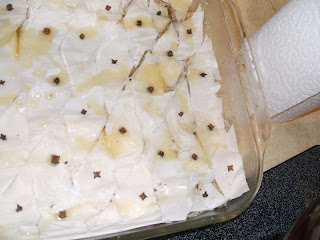 And finally, sprinkle all over with about a teaspoon of water (my mom just runs her fingers under running water and flicks it on).

Bake the baklava at 325o for one hour, covering with foil for the last 20 min. 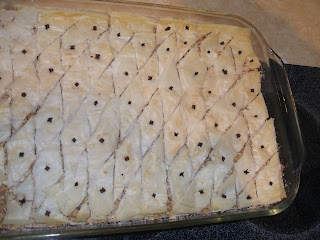 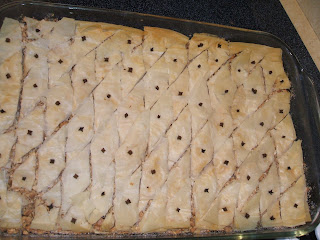 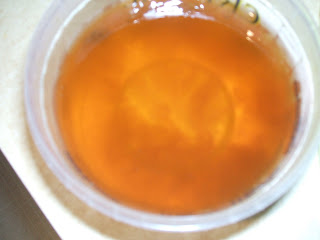 Rind of ½ lemon (I throw in the entire lemon half)

Combine the sugar, water, lemon rind, cloves and cinnamon sticks in a heavy pot. Bring to a boil, then simmer for 15-20 minutes, until the syrup thickens slightly. Then add honey, lemon juice, and brandy, mix well, and remove from heat. Allow the syrup to cool.

Sprinkle HALF of the syrup over the baklava.

This time, we used the leftover half batch from the last time we made baklava, which we just stuck in the freezer (although it doesn’t freeze solid! It’s so cool! Must be all the sugar…)

Anyway, here’s the baklava with the syrup sprinkled on: 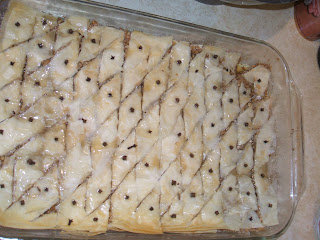 The close up. Look at the lovely pastry and nut strata! 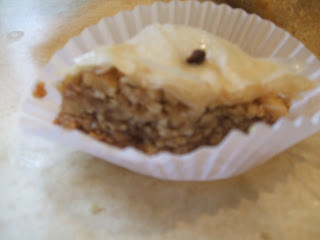 Beautifully arranged on a platter! 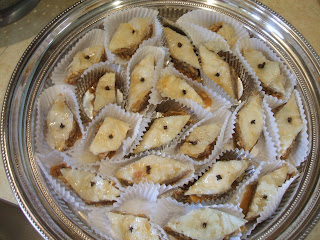 The whole recipe, lovingly typed up by my Mom:

Rind of ½ lemon (I throw in the entire lemon half)

Assemble baklava by greasing a large (I use a 10”x15”) pan and starting to layer phyllo, brushing every other layer with melted butter. Put 12 layers (two layers= a single sheet folded in half) on the bottom, then sprinkle 1/3 of the filling evenly over. Put 6 layers over that, another 1/3 filling, another 6 layers, and last 1/3 of filling. Put 10-12 layers on top, brushing the top layer with plenty of melted butter.

Using a sharp knife, cut the baklava into diamonds about 2” in length. Anchor the baklava by sticking a clove into the center of each piece. When every piece has a clove in the middle, drizzle some melted butter over the baklava. Then sprinkle a tiny amount of water over the top with two sprinkles from your fingertips.

Bake the baklava at 325o for one hour, covering with foil for the last 20 min.

Meanwhile, make the syrup. Combine the sugar, water, lemon rind, cloves and cinnamon sticks in a heavy pot. Bring to a boil, then simmer for 15-20 minutes, until the syrup thickens slightly. Then add honey, lemon juice, and brandy, mix well, and remove from heat. Allow the syrup to cool.

When the baklava is ready, pour half of the cooled syrup over the warm baklava. Allow it to absorb the syrup for about an hour before checking to see if additional syrup is needed.

Cut into pieces using the earlier cuts. Put each piece into a paper cupcake cup before serving.

Here are the secrets to GREAT baklava:

1. Clarify the butter. You get a much cleaner, less greasy flavor and texture.

2. Use the nut blend. The almonds mellow out the walnuts.

3. Only use half the syrup. This baklava is wonderfully moist but doesn’t leave your hands coated in syrup after eating it, and it is not SICKENINGLY sweet- you can taste the nutty goodness!

Thank you so much for your lovely comment on my blog! I'm so glad you led me, in turn, to your beautiful blog! Oh my goodness, I LOVE baklava... It's one of my favorite desserts of all time... :-) My Dad is from Israel, and so I spent lots of time in Israel when I was growing up - and lots of time savoring baklava! :-) Whenever I set aside the time to make baklava, it's always worth it. :-) Your step-by-step directions are so beautiful, as are your photos - and especially the luscious final presentation!!