Today for a nice snacksie, I had a Z-bar. 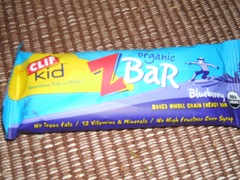 These things are the best. They taste, first of all, like delicious homemade cookies, just in bar shape. Their nutritional stats are right on (apparently the people at Clif give adults bars with sugar as the first ingredient, but put a little more consideration into the nutrition for the next generation- these have oat flour and oats, respectively, as first and second ingredients, THEN sugar). And they are among the cheaper of the nutrition bars. This bar made me super happy!

The other product I tried today was GRODY. 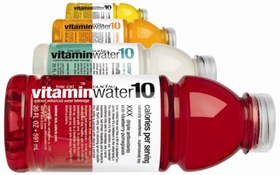 The picture is a re-creation, as I had a few sips at work and then threw the bottle away. They were giving out free samples on the T (the subway, for those who don’t know Boston) of the new 10-calorie vitamin water, and I love free food, as everyone knows. Aside from the fact that I think products like VitaminWater are stupid (and, incidentally, original Vitaminwater is super high in sugar), because you should get vitamins from having a varied and healthy diet, not from drinking a big cup of sugar and food coloring, VitaminWater 10 is GROSS. I had the blueberry acai flavor or something like that, and I finally figured out what it tasted like: melted Jello. Don’t buy this. Ew. 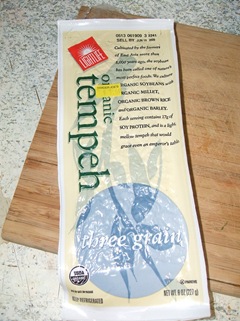 Moving on to happier news, I finally had tempeh success! It took umpteen trips, but I am spoiled enough to be within walking distance of two Trader Joe’s, so after a lot of trips and a bit of whining I fiiiiiiiiiiiiinally got my hands on some!

I went on “the google”, as George H. Bush calls it, and found a recipe that recommended making a foil packet and combining the tempeh with some 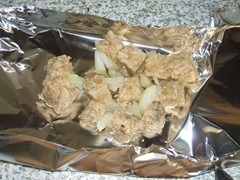 onions (which I’m so using more of next time, they baked up nicely!) and 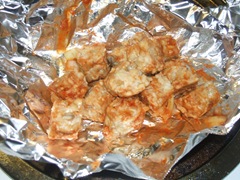 barbecue sauce, marinading for a bit, and then baking. Into the oven, I also threw 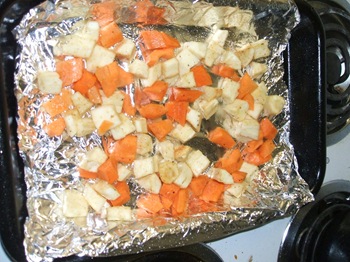 1 cup of parsnips and 1/2 cup of carrots, chopped, tossed with a teaspoon of olive oil and a sprinkling each of chili powder and cinnamon. 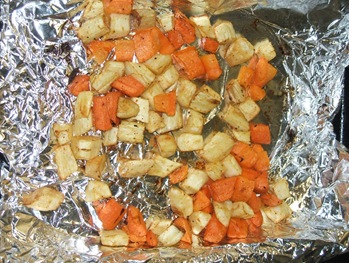 Afterwords, nicely browned. Roasted vegetables are the best! They get all sweet and lovely!

For a side dish, I made something that honored my Greek heritage a bit: tzaziki! Tzaziki is good with anything roasted! 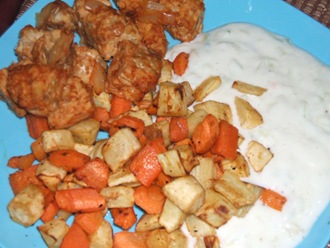 I grated part of a cucumber (this batch included probably 2 tbsp grated cucumber) and salted it. Meanwhile, I combined the other ingredients: 1/4 cup of yogurt, a whole buncha black pepper, and a whole buncha lemon juice! It’s better with fresh herbs, but I don’t got any! As you can see in the above picture, it spread out quite a bit on the plate- draining the yogurt or making it with Greek yogurt is certainly an offer if you want a more thick condiment, but I used it as kind of a dipping sauce for everything, so for me it was perfect. 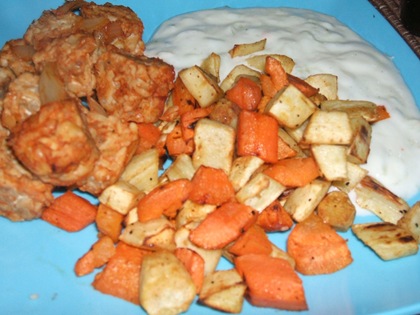 This was an exceptionally satisfying meal. My ingredients were kind of calorie-dense (I only used a third of the package of tempeh- that’s less than 3 ounces- and it came out to 153 calories) and as a result this is a much smaller spread then some of my massive salads and accessories, but tempeh is definitely filling and satisfying. Roasted vegetables, too, are lots of nutrients packed into a smallish volume (you can’t totally tell how much they shrunk in the before and after roasting pictures, since my zooming skills are nonexistent, but they did shrink!). However, I ended this meal feeling satiated and even though tempeh is sort of a hippie protein, I think it still qualifies as comfort food. The flavors were a nice mix of sweet and savory, and the tzaziki added nice zest and tang!