I had an adorable mini-picnic after my workout today. 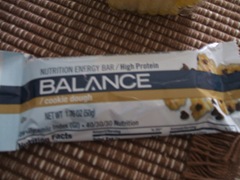 Balance, in cookie dough, probably my favorite flavor. I had a little bit of a Balance Bar addiction in high school… I’d have them EVERY DAY as kind of meal replacements. It was a terrible habit (although I feel like everyone eats pretty appallingly in middle and high school). Anyway, generally I eat real food now. But it is nice to know that you’re getting all the protein you need after a workout in a compact, tasty way.

And for energizing carbohydrates, vitamins, and general deliciousness, I had this: Fresh pineapple makes me so happy. I’m bummed they were out of it at the grocery store earlier (and pissed I paid so much of it- well I used my convenience points, which makes it psychologically easier, but I’m still EMBARASSED how much I was willing to pay!) but it is kind of nice having the single serving, because if I’d had a whole pineapple to eat by Thursday (when I’m going home for four days) I’d have been stressed about it going bad.

Anyway, I took those two lovely things to BU Beach (a section of campus with a quad overlooking the river. Storrow Drive, a big thoroughfare goes past, and supposedly if you close your eyes you hear the cars going by and it sounds like the beach). BU Beach is warm and sunny enough to have a picnic for MAYBE ten days out of the year (though they pretend otherwise on campus tours!) but it was really nice. Ate my snack (which was so sweet!), did a bit of poli sci reading, and then stretched out to bask in the sun, and the sun promptly set. And I opened my eyes and everyone (there had been like twenty people there!) except me was gone. Pretty hilarious.

For dinner, I felt like noshing rather than mealing, so I made myself a nice proteins and veggie platter. It was a nice way to try and use up some of the things in my fridge! 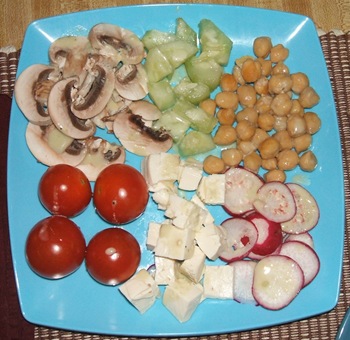 Going around, we have shrooms, cucs, the last of the chickpeas (about 1/4 cup), radishes, tofu (about 1 oz.), and cherry tomatoes. 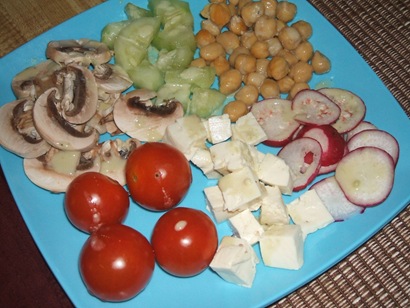 Everyone got a 1/2 tbsp drizzling of avacado caesar dressing (not reduced fat or anything, which is why I watched the portion size). Raw tofu is meh, but tofu with tasty salad dressing is delicious! I discovered this at the fancy shmancy BU salad bar. 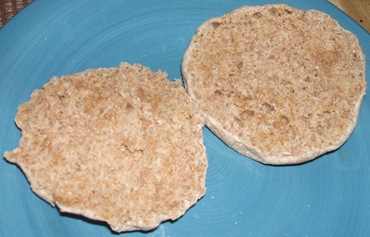 For grains, I toasted up a Thomas’ Hearty Grains 100% whole wheat (still really like those!) with a little bit of butter- the real thing 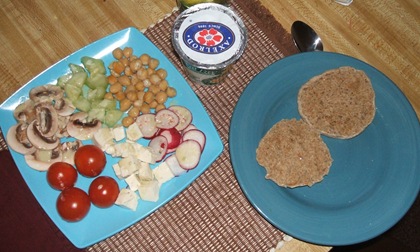 And accompanied everything with a lemon yogurt, and of course water. A very satisfying dinner, though it was more in the style of my typical lunch.