Ugh, for the past like 2 weeks I have just not been awake all the way.

I think it’s a combination of not sleeping enough at night (why do I wake up at 7:30 EVERY MORNING??!?!?! WHY?!?!?! I don’t even understand what happens at 7:30 that would wake me up. The sun rises at like 6, the T starts running at like 5, my roommate snores consistently through the night- I spose she could start some new apnea type thing at that hour?) and ridiculous amounts of walking. With the weather being nice I have been walking just miles and miles and miles every day, and it’s so pleasant! But yeah, it does mean I am burning more calories… and should be eating more food…

Well okay, getting onto the food. I was feeling tired and blah, so I went for comfort food. 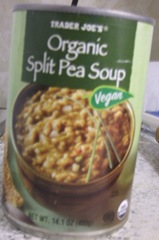 Pea soup! My favorite pea soup ever is my mom’s, because she makes it whenever we have a leftover ham bone. I actually am not a huge fan of ham on its own, but as a pea soup enricher…. mm. But, that being said, Trader Joes’ is SUPER tasty, and as you can see, vegan and organic. I really love when organic food is affordable, because obviously it’s preferable in terms of environmental impact! 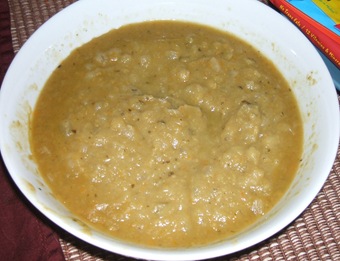 In terms of flavor, it’s very nice and creamy and comforting, which was what I was going for (it’s also overcast and has been raining on and off, and split pea soup is pretty perfect rainy day food).

To accompany, I had a leftover half apple sliced up with cinnamon and slivered almonds 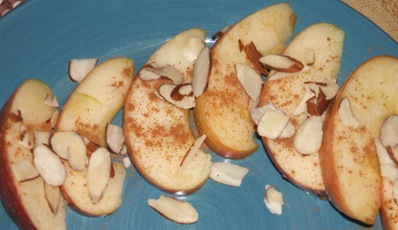 I got addicted to this combination when I’d be running off to work and not have time to eat my apple slices from lunch, so I’d throw them into a bag with some almonds and call it trail mix and have it for a snack. The crispness of the apple, the spice of the cinnamon, and the crunch and fattiness of the almonds- whoo baby.

Also, my first taste of the honey graham Z bar. Yum! Very nostalgic- took me right back to the graham crackers of my youth (except soft!). 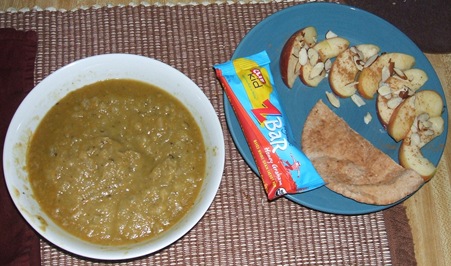 All together, along with half a TJ’s apocryphal pita that I used for dipping.

I got this for free on the street (the big companies really try to get us college kids addicted to their products!) I had it after I had my blood drawn this morning, just to get some fluids/sugar in me. Again, gross. I just don’t see the point. If you want something watery, have water. If you want juice, have a small glass, it’s not *that* many calories and it actually *tastes* good, unlike this *watered down liquid jello*

Poor acai berries. They were just sitting on their bush, minding their own business, until some corporation decided to market them as like this magical slimming elixir and now they’re in everything, doing not much for flavor or health.