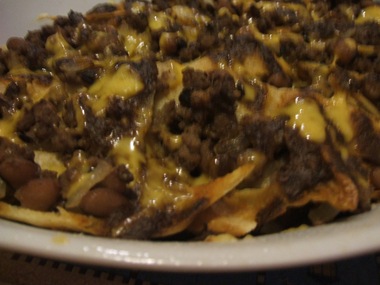 Chilaquiles, per the Williams Sonoma Mexican Cookbook (an exceptionally beautiful, droolworthy cookbook), are a simple combination of shredded tortillas and basically whatever leftovers the chef of the house feels like using up. In honor of that spirit, I threw together quite the random mixture! 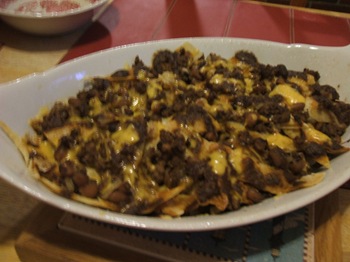 To serve two, I shredded up three tortillas (although one was the mondo-thick Salvadoran kind so it’s more like 4 of the standard sized corn tortillas), and that was the grains layer.

The meat layer was the rest of the taco ground beef (like six oz.),  onions, and 1/2 a cup of black eyed peas, the legumes we had on hand.

The sauce was a dried poblano, rehydrated with boiling water, more onions, 2 T whipped cream cheese, and a splash of balsamic and a dash of vinegar. Baked in the oven at 375 for 20 minutes or so?

I threw some cheese (2% cheddar) on partway through, which was an excellent decision :D 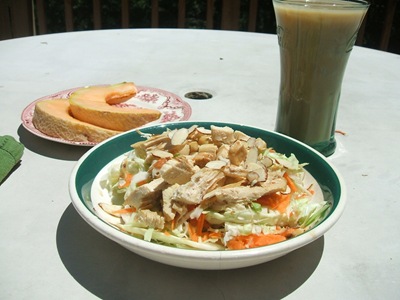 That’s a homemade iced misto you see in the background. The main course was this rather beautiful Asian chickens salad: 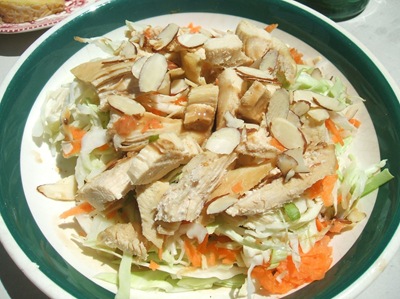 The chicken I discovered in the freezer- just a random baggie labeled “cooked chicken”. SO GREAT! I brought it back to life in the microwave, marinated in a bit of Kraft light Asian sesame dressing. 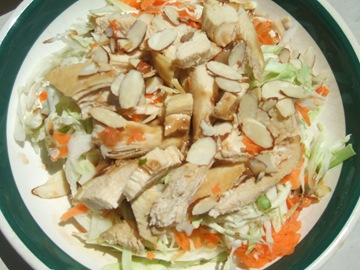 Then I threw it in a salad with shredded cabbage, grated carrot, chopped green onion, more of the dressing, and slivered almonds on top for crunch. 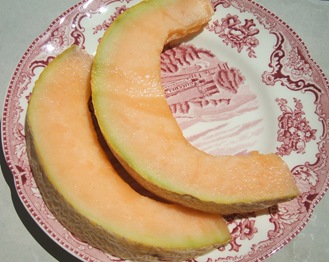 And for a nice chaser, one of these bars: 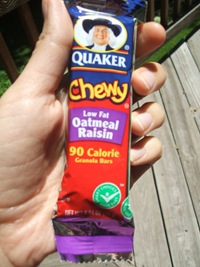 Again, boo to trans fat, but the oatmeal raisin one is quite cookie reminiscent.

I’ve been annoyed at how sedentary I’ve felt lately, compared to the manic pace I keep at school, but it’s probably good I’m forcing myself to relax. I mean, today, which I considered “idle” and was going nuts over, I biked to the library and back (like 4.75 miles round trip) and went on our three mile loop in the park and did abs.

I did do a healthy amount of lounging, though. 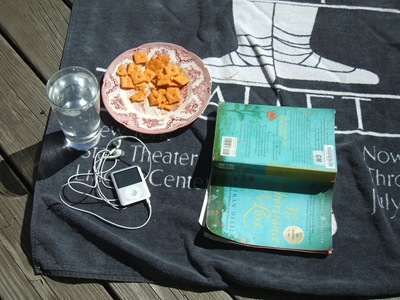 On my deck, in a bikini, with club soda with a bit of grated ginger; Cheezits (like 2/3 of a serving- they really didn’t disagree with my stomach, they’re the most artificial thing I’ve eaten in awhile!). To accompany, the iPod and the latest library book (The Inheritance of Loss, v. good so far).