I’ve been doing so much outdoor dining lately! Yay for springtime!

Last night was admittedly rather cool, but we powered through.

I admit this chicken looks a little crazy: 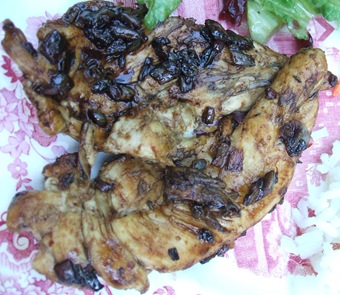 However, you must believe me when I tell you it was AWESOME! My mom and I collaborated on this recipe, using (duh) chicken instead of pork. This came from my desire to use up shallots we happened to have. They’re pricey enough that we don’t get them on a regular basis, but my mom bought them for rice salad the other week, but I convinced her that it had been too oniony in the past and would be better without them (which it was) and anyway that shallots were an awesome, elegant ingredient we could use for something else awesome (which we did).

On the side, salad from a bag of surprisingly good quality! 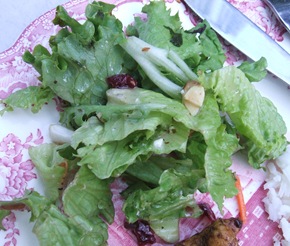 It was just Safeway brand, “Mediterranean blend” or something, but it had slivered almonds, a wee bit of feta, dried cranberries, and a surprisingly tasty white balsamic vinaigrette. 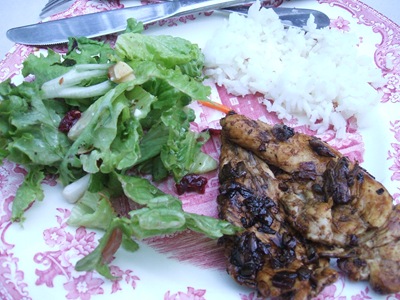 Along with plain old rice. A lovely dinner! I went back for a little more of everything, because it was quite healthful, too.

Dessert I enjoyed along with Strangers on a Train. I looooooooove Netflix! I have a free trial for the second time! (Thanks Lyddie!)

My mama brought me AMARETTI that she got at what sounds like a ridiculously classy business meeting. 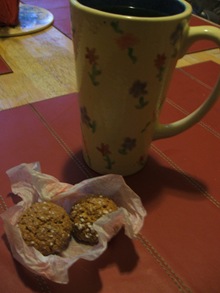 I was actually slightly skeptical about it, cause it seemed really dry on the inside and I was afraid the middle would be too, which is NOT how one wants amaretti, but it was in fact DELICIOUS and awesome and tender and almondy in the middle! Yay!

Breakfast was not al fresco, but was still quite sunshiney. 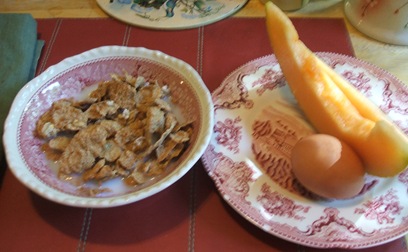 For grains, we have Smart Start, in the original oat variety (when I went to the beach, I just put on the grocery list “any cheap cereal with whole grain as the first ingredient”, and this must’ve been on sale). 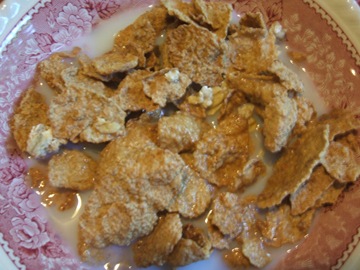 I’ve never had it before, and it was QUITE tasty! Not too sweet, but with a great crunch. Nice and oaty.

To accompany, gorgeous cantaloupe and a hard boiled egg I had a sudden, intense craving for. 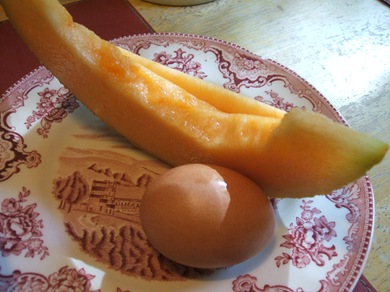 Both were delicious. I tried to get a picture of how beautiful the yolk was using my technique (start the egg in cold water, heat until just boiling, lower the heat to low and let the residual heat barely boil it for one minute, then remove from heat, cover, and let sit for 13 minutes). This was the best I could do: 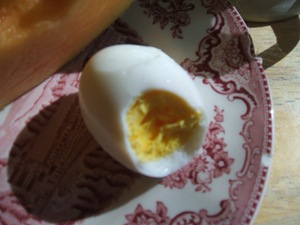 Lunch was on the deck, and was MARVY!

I’ve been craving cheese, so I made a grilled cheese with spelt bread, about 3/4 oz of the classy swiss we bought for my mom’s Mother’s Day tart, and some thinly sliced apples (and the barest hint of dijon). On the side, I was thinking tuna salad but we were out of fresh greens, so I decided to go for Salad-Nicoise-ish and steamed up some green beans. Along with tuna, more apple (I used half an apple total, if anyone’s keeping score), and shrooms. 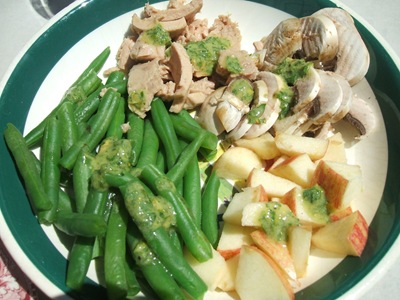