Regular readers (all two of you) will know that I am someone who makes things from scratch- I enjoy it, it’s healthier and more natural, I have more control over the ingredients, etc.

However, yesterday I wanted pasta. We had no un-frozen proteins, so I figured the easiest thing to thaw would be frozen meatballs. We had SUPER EXCITING LOOKING natural turkey meatballs from Trader Joe’s, so I was all set to use those, but then I remembered we still had these: 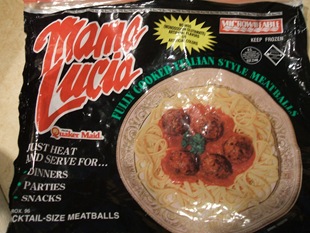 And you should always, always, use up the stuff you have before opening new stuff. That’s just better for everything.

Okay fine, so then I thought I’d make the sauce from scratch. But it was like 6:30 already and my mom called and said she was on her way home from work and it would mean opening up all these new cans and trying to fit them in our fridge, which is already full because my mom and sister both open things and forget them, unlike me, the VIGILANT member of the family!

So I used a jar for a shortcut: 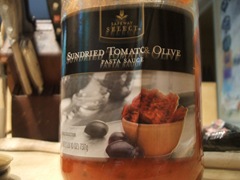 I have to say, it was pretty tasty, and the ingredient list was on the natural side. So I cooked up some spaghetti, and heated the meatballs in the sauce, mixed them all together, et voila: 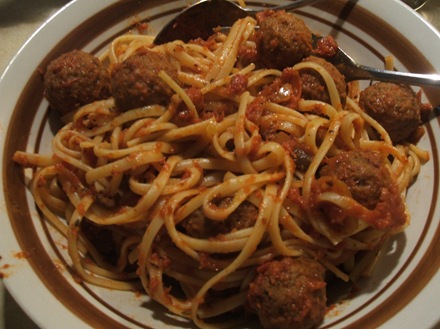 I have to say, it ended up pretty delicious looking. And it really was just a series of events that led to me cooking in such an unnatural manner.

To redeem myself SOMEWHAT, the salad was all natural. Mixed greens, mushrooms, and Mom’s homemade vinaigrette: 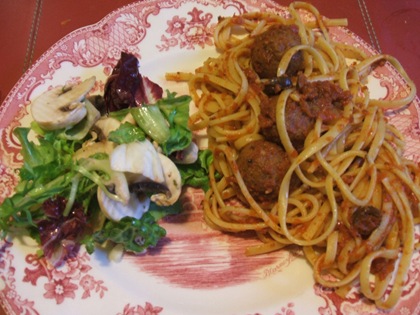 My plate. I actually ended up going back for a fourth meatball- they were better than I thought they would be! I realize, though, that I had red meat twice in one day, yikes! I am not a big red meat eater, so it’s not the end of the world, but I’m cutting back for the next few days! (As I’ll be vacationing with a vegan, and I’ll be at the beach, where my favorite food is seafood, and there are farm stands with gorgeous produce on the way down, I don’t anticipate any problems whatsoever).

Breakfast this morning was GREAT! 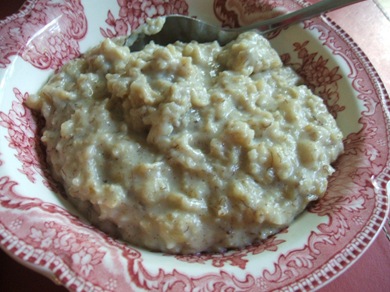 Stovetop banana oatmeal! I was bummed that we didn’t have bananas, but then I was like OOH I BET WE HAVE SOME IN THE FREEZER, because we we always forget about our bananas and have to mash them and freeze them, and then use them for banana bread. But I just thawed half of one for my oats!

I also had some strawberries, and some walnuts, which I suddenly had a mad craving for 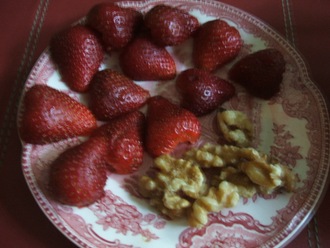 All together, with tea. It’s another beautiful day! I am off to the park, then off to get a new swimsuit for the beach. Hope everyone’s having a good one!

Hey, do I count as a regular blog reader! The blog is great:) I hope you have an awesome time on your vaca girl! I want to see lots of food from Greece in a little while, so excited for that!