I am posting this from Amtrak! Well, in likelihood I am WRITING this on Amtrak but will be POSTING it later assuming that, as usual, I am unable to pick up any wireless internet. My laptop is moody!

I am feeling that delightful feeling of disbelief that I am actually done with the semester. Yesterday seems like a million years ago!

Breakfast was the last of the coffee at finals bagels (the other half of the cinnamon-raisin). 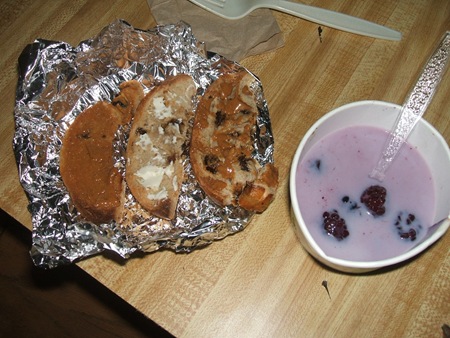 I knew it was going to be stale by Friday, so I froze it earlier in the week and put it in the fridge Thursday night. When I woke up bleary eyed yesterday I wrapped it in foil, threw it in the oven, and went back to bed to not sleep, per se, but lie there with my eyes closed at least. And then the apartment was filled with the lovely aroma of breaking bread!

I had it thirded, two pieces with PB and one with lite cream cheese. On the side, the last of my berries n milk. I seriously enjoyed this combination, I think it has implications for my summer cereal meals.

It also made fuel for a GREAT workout. I can’t remember the last time I worked out for a full hour, but it felt FANTASTIC. It was a combination of factors- I thought I was going to be going out with my friend for a fancy, rich dinner (although that ended up not happening- more on that later), I had a headache and I wanted to work it off, I had those nice energizing carbs for breakfast, plus a coffee while I digested breakfast and did some studying, I had taken the day before off, I knew it was my last workout at my fancy school gym and at home I just go to our dinky RecCenter with lackluster equipment and so I wanted to make it count, they had a new issue of Runners magazine which was AWESOME! I can’t run at all, but it made me want to!

I came home to some southern comfort for lunch! 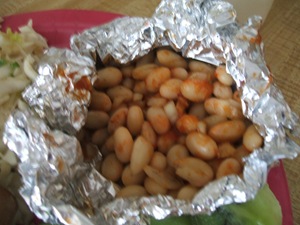 The star of this was the rest of my beans, which I made into another “campfire packet” of aluminum foil. I threw in the last of my bbq sauce, minced onion, and some hot sauce, and baked at 400. YUM! 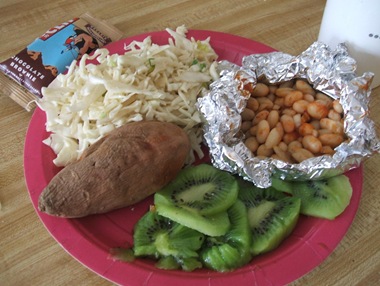 To accompany, some semi-Southern side dishes. Cabbage, jalapenos, and green onions that I’d chopped when I’d had a chef’s knife and thrown in a bag. It became slaw by throwing mayo, mustard, and lemon juice into the bag and shaking it around like crazy! So fun. I also had a sweet potato that I’d micro-baked when I had a micro-, so I just had to warm up in the oven. For fruit and GORGEOUS color, a seriously sweet and juicy kiwi.

And since this is what I’d call “cookout food”, I decided to go with a cookout-type dessert, in the form of this “brownie”. The last mini Clif bar, also from coffee@finals. 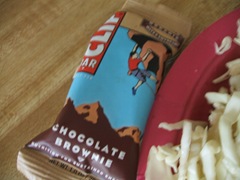 It was better than the chocolate chip one I had, but I am just not a clif bar person. But I was happy to get a protein and nutrition boost, because the workout wiped me out!

I took my last final (I ate a HEALTHY amount of trail mix before and after the final- probably closer to two servings than one- I was physically and mentally starved!) and then it felt SO GOOD to unwind. I got my last look at the river til September, and enjoyed some artificial flavor. 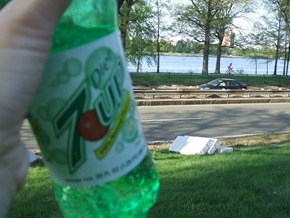 So dinner. I had gotten a $50 legal seafood gift certificate at work because we held a drawing and no one claimed their prize (!? crazy people!) and I had organized the drawing and was, yknow, the unpaid intern, so my boss gave it to me. YAY!

So my friend had her last final from 3-5, the same time I had mine, and I said “Oh em gee, PERFECT, we can both finish our finals and go out for a fun, classy dinner to say goodbye to school!”

We planned this MONTHS ago, we were super excited. SO I sent her a text message yesterday morning, saying I’d made a reservation for 7 and was that cool with her. And… she sent me a text message starting with “Don’t hate me…”

She ALWAYS starts her text messages with “don’t hate me”, because she is ALWAYS blowing me off and is just kind of a flaky person and, I’m starting to realize, probably not worth having as a friend because she is so unreliable.

So dinner was off.

So I had no food because I was REALLY GOOD about cleaning out my kitchen, so I decided to get some sushi!

I went to Sushi Express, which gets pretty good reviews, and I got a spicy yellowtail maki (yellowtail’s my fave!) 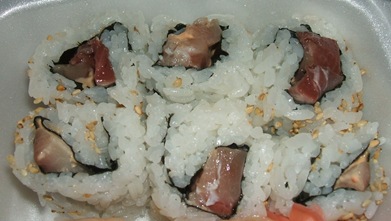 I was impressed with how affordable it was… I gotta say, part of the reason is cause they go real heavy on the rice and kind of light on the fish! But, the fish was really fresh and delicious.

I also got salmon, atop some rice and wasabi and lightly broiled (or so the description read) 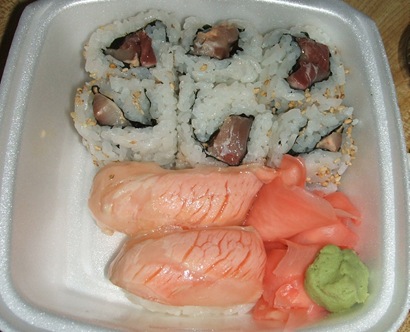 Wow! It was like buttah! Soooooo tender and salmony and rich and indulgent! And I love the wasabi in the background. I love all things spicy, so no surprise there. I have to say, it was so like buttah that I suspect they put something buttah-y on it… what I have no idea, I should learn more about Japanese cooking. Anyway, it was crazy good.

There was also about half a pound of pickled ginger, hahaha. I love pickled ginger (I love ginger in any form!), but I didn’t eat ALL of that.

Another incentive for going to Sushi Express was that it happens to be DIRECTLY ACROSS THE STREET from Tatte’s. Mm mm mm mm mm!

I got one of their increeeeeeeeeeeedibly tiny brownies. Jeez, it’s five inches long! 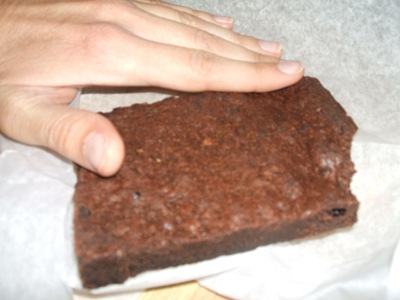 Yes, that is a bite taken out of the corner. I waited too long to get dinner and was hunnngryyy by the time I had picked up my food, and four blocks home… was just too long.

This brownie was seriously amazing. I am at a point in the, ahem, *lunar cycle* where chocolate is REALLY appealing to me, and this brownie delivered the chocolate in a way where it was like… I could FEEL the CHEMICAL REACTIONS. The phenylethylamine increasing my heart rate, the theobromine raising the level of feel-good serotonin in my brain… (I did a report on chocolate in 8th grade chemistry, hahaha! I have always been a food lover). But man it was so good and rich and dense. Those first bites I took walking in the street I was thinking this was going to be a cakelike brownie, and was kind of disappointed, but then I moved further in and it was FUDGY FUDGY RICHY RICHY baby!

So I ate about half that after my sushi (I know it’s a weird combination, but there’s something awesome about sushi and sweets- briny and fresh meets thick and rich- I have to say, my favorite thing ever is to go to this sushi place in MD that has a Ben and Jerry’s around the corner- sushi and ice cream is an exceptionally good combination).

Then I wanted to take a break. I flirted with the idea of getting something healthier and substantial, because I had burned a LOT of calories that day and knew I ought to refuel and it’d probably be wise to have something a tad more substantial than a brownie. But there was nothing real satisfactory in the school convenience store (there never is, no surprise there) and the brownie just sounded better and better, so I came home and- genius stroke- HEATED UP THE REST OF IT IN THE OVEN. Oh mannnnnnnnn. Heaven.

So I packed eats for the train. 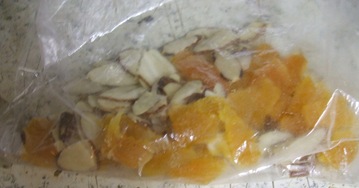 4 dried apricots, broken up, and 1.5 T or so slivered almonds. That’s about 125 calories, and WAY more balanced and delicious and natural and free of added sugar than those hundred-calorie packs. 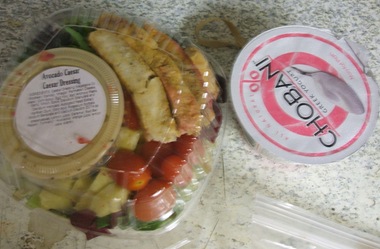 A salad: the last of my greens and cucs (my crisper was EMPTY when I left, go me!), the last of my avocado caesar, and, to supplement, some grilled chicken and grape tomatoes I got at the school salad bar. And a chobani! 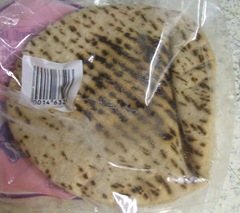 And the last of the TJ’s whole wheat pitas. I am GOOD!

So here’s how it’s gone on the train, food wise: I was SUPER HUNGRY when I got on the train (at about 6:45) so once the cafe car opened at 7 I grabbed a banana there (I was craaaaaaaaaaving a banana and they had them and it was PERFECT! It just made me SO SATISFIED to know EXACTLY what I wanted, to know it would be good for, me, and then to GET IT and have it PERFECTLY RIPE and delicious, and it was just… a great food experience, and I wish it was always that easy for me, actually). So I had the banana and the Chobani, and that was breakfast. Very dense and filling.

So after that I was in kind of a twilight sleep through Rhode Island and Connecticut (I have my pillow and blanket with me, so I did more of my signature lying with my eyes closed wrapped up in a blanket never actually getting to sleep). Around 10:30 (when we hit Manhattan), I had my midmorning snack of the trail mix, and, cause I was bleary this morning and somehow forgot my water bottle, a Perrier (ooh lala). Now it’s 12:38, we’ve left Philadelphia, and I’ll probably have my salad and pita in the next 30 to 45 minutes or so.

I’m eating light today one because I’m sitting on a train and not getting any exercise but TWO because I am having a SERIOUSLY EXCITING evening meal.