Thanks everyone for the nice comments about my poor kitty. I’m still a bit shell shocked, so I’m sticking with prewritten posts for the time being.

Last week, when my  mama was on a business trip and I was home alone, I had some ingredients that needed using. The result was the best, easiest soup recipe I have ever invented. 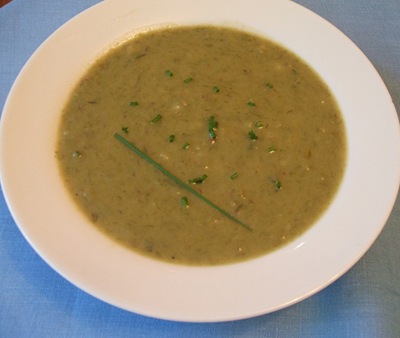 Back story: when I was little, when I had a “Dad weekend” (ah the joys of being a child of divorce), I’d often get dumped at taken to my dad’s parents house, which I loved. We’d always spend a lot of time in the kitchen, watching the endless escapades of the squirrels attempting to get at the bird feeder and speculating on the lives of the pigeons my grandpa referred to as “Fatty and her boyfriend”.

My grandma would buy treats for us (it was the only time I ever ate Pop Tarts which were my ultimate fantasy snack food that my mother very wisely never had in the house) but the thing I loved the most was “that yummy soup”: potato-leek soup. It was undoubtedly from a mix (I vaguely remember the chemical faux-cheesiness that I, of course, savored), but to this day the thought of potato-leek soup gets me on a huge nostalgia trip.

Anyway, going in a different direction, I used, wait for it, actual leeks and potatoes. 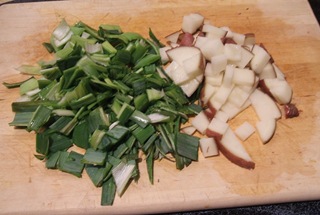 These are sort of the reject leek pieces- all the leek recipes I’ve been making lately have called for the “tender white parts”. Well what’s wrong with the coarse green parts, huh? Huh?

I culled various ideas from cookbooks of mine: some from Moosewood, some from Cooking Light, some I can’t remember.

Anyway, the recipe for a soup of leeks, potatoes, and very little else:

1 small potato; approximately 6 ounces (I used a red one, and thus didn’t bother to peel it)
The green tops from one large leek
1/2 tsp butter, 1/2 tsp vegetable oil (the oil is heart healthier and as an added bonus reduces the chance of the butter burning)
1/2 c. vegetable broth
1/2 c. buttermilk
salt and pepper
chives (optional- we have some growing on our deck!)

Heat a small saucepan on medium. Melt butter and oil. Add leeks and cook, stirring often, for 3 minutes. Reduce heat to medium-low and cook another three minutes, or until tender.

Add vegetable broth along with 1/2 cup water (you could do all broth, but this soup was plenty flavorful and I was saving the rest of the can for something else). Bring to a boil, cover, reduce heat, and simmer until potatoes are tender (this only took me like seven minutes).

Remove soup from heat. Allow to cool slightly, and then blend with an immersion blender (or transfer the whole mix, with all the broth, to a blender and blend there). Stir in buttermilk and salt and pepper to taste and heat on low just until warm (do not allow to boil). Garnish with chives, if desired! 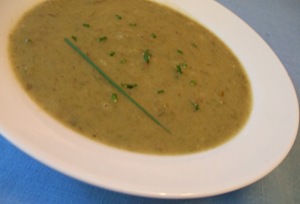 I really cannot put into words how delicious this soup was in its utter simplicity. Nourishing, filling, warm, and lovely.

You can puree it as much or as little as you like. I used my immersion blender on the lower setting and left it a bit chunky. 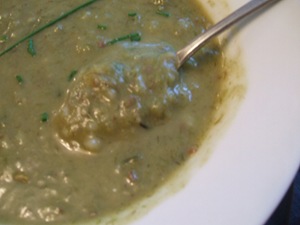 Wow! A great recipe, Yumm!
Have a nice weekend!

Any kind of soup is delicious in my book :) Visits to the grandparents' are the best...I always got pickles, Jello in champagne glasses, and blueberry pancakes.

oh i remember growing up and when my mom was at her 1/2 day of work a week on Saturday mornings, my dad would buy us donuts for breakfast and then at lunch time we would visit his mom/my grandma and have burger king... it was the best day of the week because we got fast food which we would never ever get during the week.

Potato-leek soup is amazing. So are grandparents. And being a child of divorce (sort of). I never wanted to spend time with my grandma from my dad's side, though--she was such a diva and never had tasty anything because she never cooked. Maybe I'd appreciate her more now, since her liquor cabinet was highly-appointed.