Home. Pleased to be reunited with this (Windows Live Writer- using Blogger to upload photos is such an unbelievable pain) and my family. Everything else, eh.

I have never looked this cool in a photograph in my entire life: 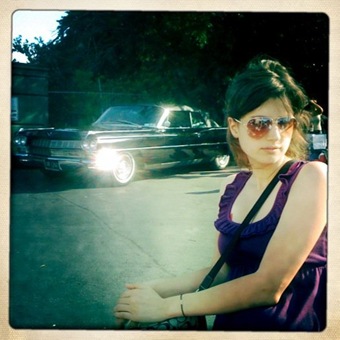 Austin has lotsa hotrods :D That was taken at Chickenshit Bingo!

So back to earlier today, when I was still 1,000 miles away (jet travel, man. Crazy stuff!). My cousin had to go in to her office, so she dropped me off downtown and I explored on foot.

The interior of Texas’s Capitol dome: 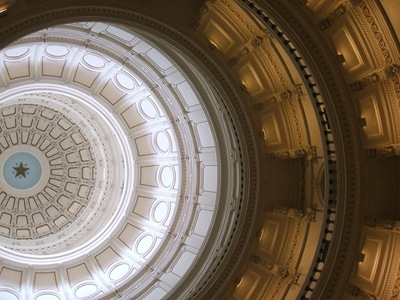 The tower at the University of Texas- it’s hard to tell but on the windows there are letters written in all these different alphabets- way cool. 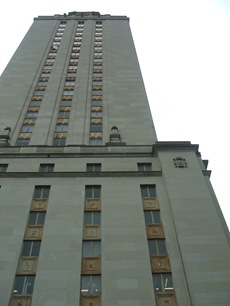 Apparently I was in the mood for looking up?

Richard recommended Caffe Medici, which apparently has won all sorts of awards for their baristas. I took a picture that had a nice look at the architecture and a blurry one of the humans. Win some, lose some. 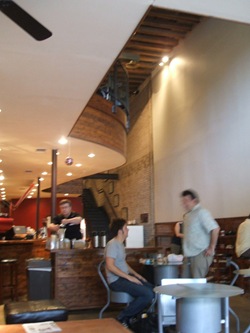 I knew I wanted coffee, and I just wanted a little snacky breakfast to tide me over from 10 til like 12:30 when I’d be having lunch with Rachel. So I asked for granola, and they gave me a mountain. 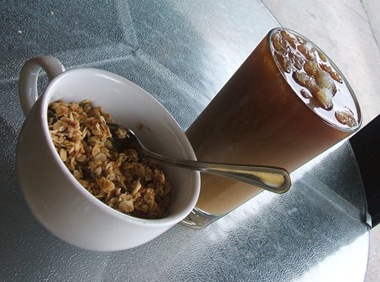 A cranberry-pistachio mountain, which was for sure the best granola I have ever tasted in my entire life ever. Alas, I could only eat half. But it fueled me for accidentally walking (I later Map My Fitness’d it- do other people use that website as a verb?) four miles or so around town. I love exploring a town on foot. And I get lost so often, too, that I often find things I otherwise wouldn’t (Bangkok’s nighttime flower market by the bridge is fantastic!).

My last meal in Austin was lunch at this lovely place: 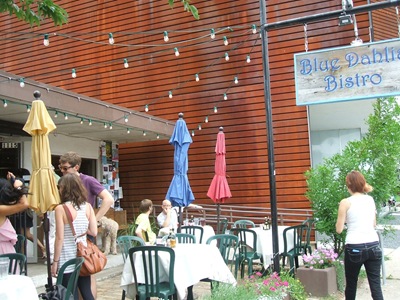 The beautiful Blue Dahlia! Apparently the East Side, where I had this beautiful bistro lunch and the beautiful brunch at East Side Cafe the other day, is considered the “dangerous” side of town. Yeah. Sure. Just look at those… umbrellas? Austin is ludicrously nice. Everywhere.

I was planning on just having water, feeling a bit overcaffeinated (we got a LOT of coffee in Austin!) but then I noticed mint-hibiscus iced tea and got in on that. Mmm mm. And so pretty! 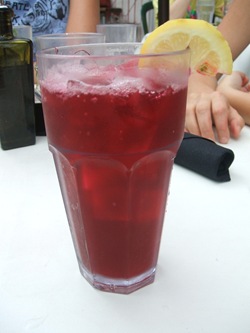 I had an airplane ride ahead of me and was still feelin’ yesterday’s chips and ‘rita extravaganza, so I wanted to eat something light. Imagine my delight when it was revealed that one of the soups of the day was WATERMELON GAZPACHO. Brilliant, right?! And so beauteous. 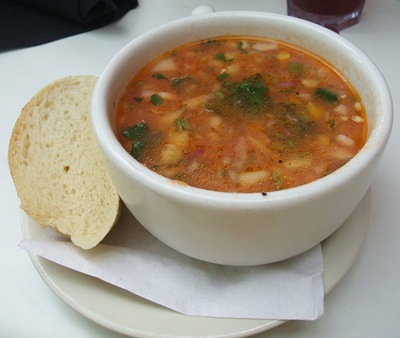 This place was nice because you can get a bunch of French-sized (aka normal and healthy, rather than American and supersized) portions and share. So I got the gazpacho, Tricia (or is it Trisha?!) got a seaweed salad, and Rachel and Katie got two tartines (beautiful open-faced sandwiches on wonderful wheat bread) and we all shared. So lovely. 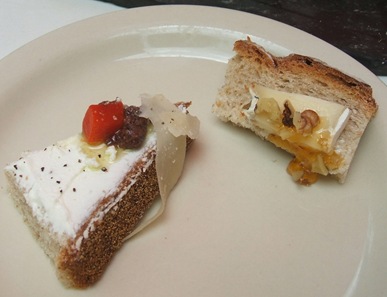 On the left is goat cheese, tapenade and red pepper; on the right is brie, apricot jam, and walnuts. That one was especially delicious, and I am definitely planning on recreating it sooner rather than later because those are not difficult-to-obtain ingredients.

So that’s almost the last of the Austin goodness (in other words, my blog will get boring again) but I do have an EPIC post planned from when Rach and I made “just snacks” for a party.

I love those pictures that absolutely make you look like someone completely different. It's crazy to realize how different you can look just because a photo captured you a certain way.

Glad you made it home safe!

I love the photgraph, you look so cool!!

You really do look extraordinarily cool in that first picture and it looks as if you should be driving that pretty car.

I've been following your posts and Austin looks to have been a ton of fun! I loved seeing all the good food you ate. :)

I have always wanted to visit Austin. Sounds like you had the perfect trip.

Goll, I cannot wait to be in Austin! I will have to try The Blue Dahlia...looks yum-tastic :)

You can always come visit me when I move (despite the fact that we've never met...is that weird?) Food bloggers unite!

Cute pic. Looks like you had a great time there. Interesting take on the gazpacho. I am headed to Spain soon and I am not sure if I will give it a shot again. Last time I was there I just didn't like it for some reason. But I was 21 then and this time I will be much older! Tastes change.

Your trip to Austin makes it seem like an absolute culinary mecca...when I think of Texas, I think of steak, but now I know there's so much more if I ever visit! Cranberry pistachio granola sounds to die for right about now...I wish we had some pistachios to try to whip up a batch!

I think I need to go to Austin right now. My friend always talks about how she loves Austin and must move there as soon as possible. That dome is beautiful & you really do look awesome/cool in that picture. Love the artsy-ness of it.