I think I neglected to mention in my post yesterday that it was, in fact, the day I'd be leaving from Austin. Oops! Well, now I'm in Austin.
Flight was uneventful. I brought snax: 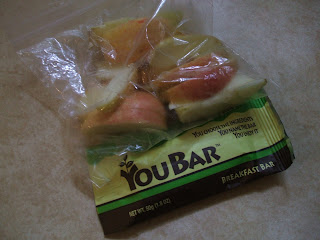 An organic gala and my latest free sample from YouBar, the breakfast bar flavor (yes, I was a rebel and ate something labeled "breakfast" at 8 pm).

My thoughts? The flavors were really nice- I love coffee chocolate and cinnamon together! However, it was on the sticky side, and I would DEFINITELY not eat it on a plane again because I didn't have a mirror in my purse and I spent the rest of my flight nervously wiping my teeth with my tongue praying there was no chocolatey goo on them!

I was glad I saved a bit of an appetite, because my cousin is an amaaazing cook and had saved dinner for me despite the fact by the time we got to her house it was like 10 pm. 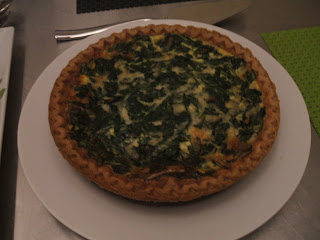 She amusingly referred to this as "lazy quiche" or something, because it had a simple spinachey awesome filling. However, the crust was homemade and was like buttah. This, as you'll recall, is the cousin who was a pastry chef for the French Embassy! I'm gonna eat well :D 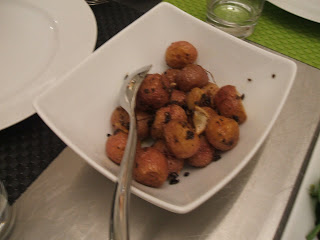 Cute little spudlets that were likely from one of the SEVEN FARMER'S MARKETS TEN MINUTES OR LESS from Rachel and Richard's house. I may never leave. 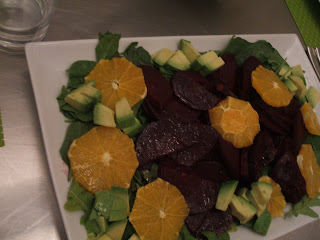 Nostalgia trip for Rach and me... this was basically our grandma's beet and orange salad on arugula, minus feta, plus avocado. Wunnerful.

There was also plum cake that escaped my camera :D

Then we watched Arrested Development for a few hours (had I mentioned I might not leave?) and I tucked myself into the cozy guest bed, which had been prewarmed for me (apologies for lame unedited pictures while I'm here, I am Windows Live Writer-less) 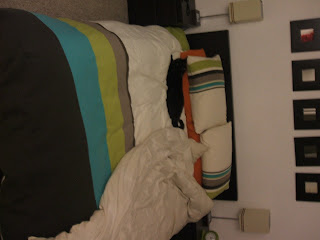 HOWDY :) Those are some pretty dishes! Jealous!!!

I hope you enjoy Austin!! If you ever want some suggestions let me know.

I have not tried a beet and orange salad, but it looks fantastic and I imagine the flavors go together very nicely. Hope you enjoy your trip!!

I can't wait to hear about your trip! (Especially as I will be LIVING in Austin in less than one month!!!)

I just got some Youbars to try out, thanks for the warning that it is super sticky.

Pastry chef for the French embassy? You'll definitely be dining in style...I can only imagine how delicious that crust was! Enjoy your time in TX!

Have fun in Austin - sounds like you will DEFINITELY be well fed! Enjoy:)

Is there anyting better than a beet and orange salad? I don't think so! :D

Looks like your trip is of to a good start with some good eats. That is awesome that your cousin is a pastry chef. Have a great time.