in which we throw an Austin party

On Saturday night, Rachel wanted to have friends over but did not want to commit to a full dinner. So she invited them for “snacks”. Being a member of my extended family, she knew (and her friends knew) that “snacks” would not only be enough food for the 11 guests but also leftovers for several days.

We made a LOT!

I think Richard has been looking for a creative outlet since he is no longer playing with his experimental noise band (yes, seriously). Because of that, he liked to follow me around taking pictures of me cooking. This one is fun, because it gives the impression that he is about eight feet tall, which he is not. 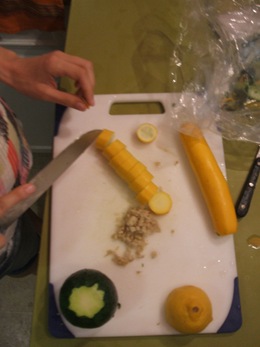 You marinate your squashies and some red onion in olive oil and Indian spices (another thing I love about Rach’s grocery place, Central Market: you can buy spices in the bulk bin! A bag of cumin was like… 68 cents? So nice to not worry about big hulking jars of spices going bad!)… 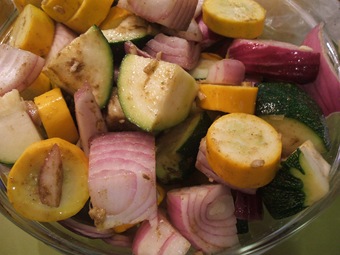 And then you fire up the grill. I intensely love this picture of Richard looking woebegone… and the followup shot of the grill after a healthy spraying of lighter fluid. 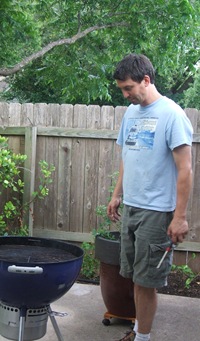 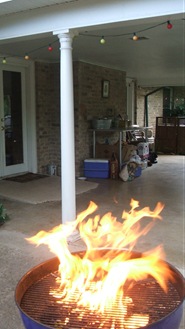 To be fair, they are very eco-friendly, so they used all-natural charcoal which just does not want to stay lit. Eventually, however, we got some beautiful embers going and on went the grilled goodness. 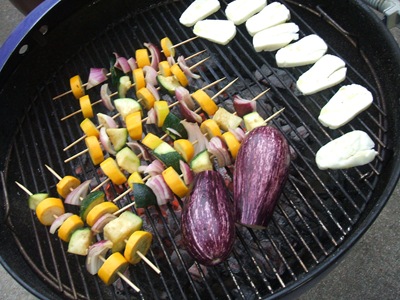 There are my kebabs, along with Halloumi cheese (yum yum yum!) and eggplants.

The eggplant technique was from Flavors of Greece (this is seriously the official cookbook of my family- I’m obsessed, my mom’s obsessed, Rachel’s obsessed, Rachel’s mom’s obsessed. It wins!) and COULD NOT BE EASIER. You just take a whole eggplant (we used baby) and trim off the top and poke slits in the side so that the bitter liquid can drain out. Stick it on the grill, whole. Cook until soft and blistered. Serve with olive oil and lemon juice. That’s it! So easy! And so delicious! 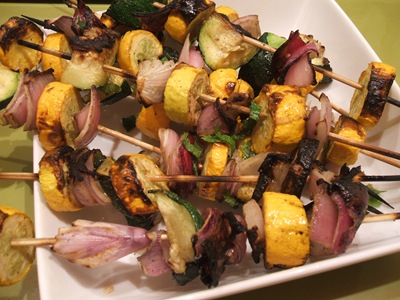 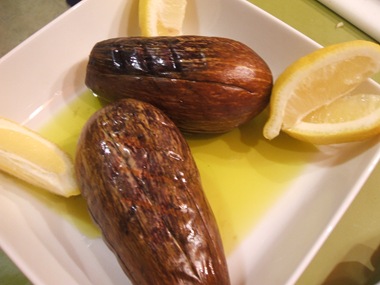 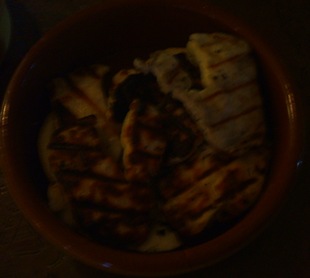 And, just for kicks, we had leftover rainbow chard leaves and cherry tomatoes going soft, so we threw those on, too, in a foil packet with olive oil and lemon. Quite wonderful. 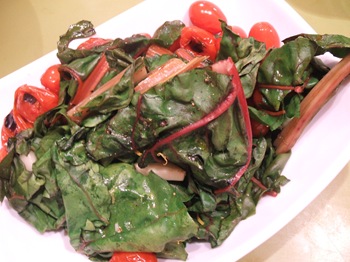 The other major project Rachel did was another winner from Flavors of Greece.

Hopefully some of you have been lucky enough to taste keftedes, Greek meatballs. Rosemary Barron offers a variation: POTATO keftedes. I’d been lusting after the recipe in my own copy of the cookbook, and then Rachel conveniently decided to be the guinea pig for making the recipe- and it is officially a winner! Super simple, too. Boil potatoes, mash, put through strainer (or food mill). 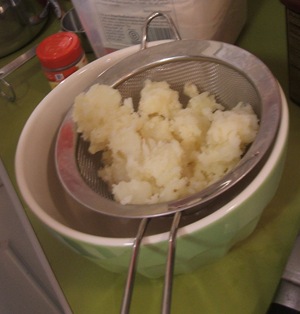 We decided to go with the spinach variation, which was great for color- you add a puree of spinach. 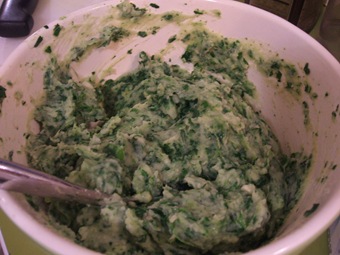 Flavor with herbs and whatnot, and then just bake in an olive-oil-coated baking sheet until golden. Beautiful and tasty! Particularly topped with lemon zest. Rachel really has the eyes (and equipment! I want a proper zester) for beautiful food. 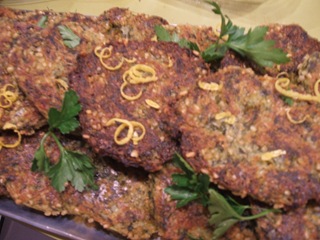 To get some protein in, I suggested the ever reliable Mark Bittman’s bean salad. All the twists are good- this was our first time trying the Indian version, which is made with coconut milk, peanut oil, rice wine vinegar, ginger, and fresh cilantro. So so so delicious! 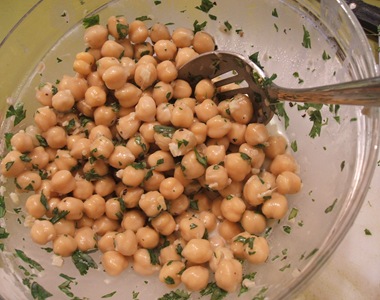 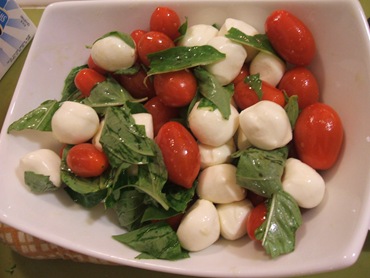 Some awesome Central Market olives- Rach picked the Spanish ones on the right, and told me to pick one. Hers were smooth and green, so I picked some wrinkly and black (Greek- also very tasty!) 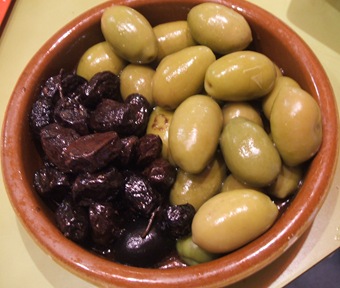 And people kept showing up with cheeses and breads (and WINE!) and we had ourselves a real nice lookin’ table (and that was before everything came off the grill!). Dark but hopefully you get the idea. 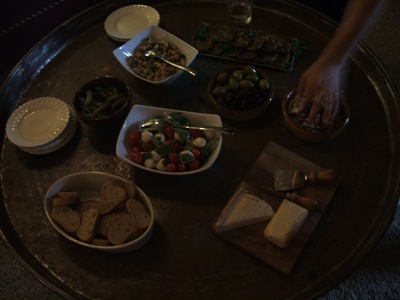 And then Garrett came. Listening to Garrett talk about food is like listening to Nick Cannon talk about Mariah Carey. [edit: or like Han Solo talking about the Millenium Falcon, Garrett and Richard]. It’s pretty awe inspiring. He works at a fresh pasta shop and makes pasta and sauce all day. Glorious, glorious, job.

He showed up with anchovy ravioli (SO INSANELY DELICIOUS) and threw together an unbelievable olive oil, basil, garlic, and cherry tomato sauce (the secret, he says, is adding the cherry tomatoes in two phases, because they have totally different flavors/textures when barely cooked and cooked for a long time). 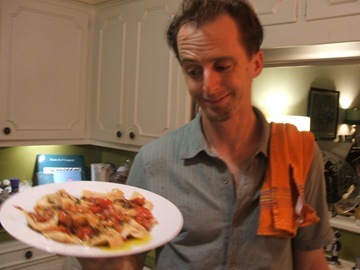 And in case all that good stuff was not enough to induce a food coma, there was dessert to be had.

Loath to waste ingredients, we found a recipe that incorporated both the leftover coconut milk and most of the egg whites from the creme brulee (which only uses yolks).

We made what Jacques Torres calls version of an Oreo cookie: I had the job of making the COCONUT CREAM FILLING!

It’s so fun baking at the home of a pastry chef. She’s got all the fancy ingredients and all the fancy equipment. Here I am using her immersion blender in her Calphalon pan to blend up the cream that used sheets of gelatin and vanilla bean (my first time using either!) 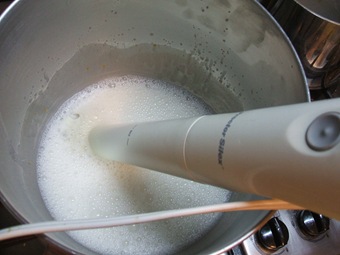 Obviously I couldn’t not taste it at this phase. Coconut milk, orange zest, sugar, rum. To. die. for. To finish it off you pour the coconut cream into flattish dishes and bake slowly in a water bath. 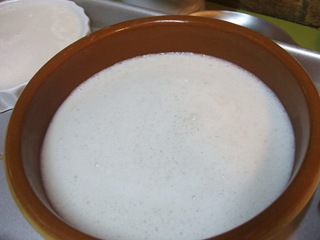 He has you use very very small dishes and invert the whole custard onto a large cookie. We used big custard dishes and just scooped filling out onto small cookies, which were baked by Rachel and were, legit, 99.99% butter with a mere trifling of cocoa and sugar and 1 egg (no other leavening). Basically chocolate shortbread. 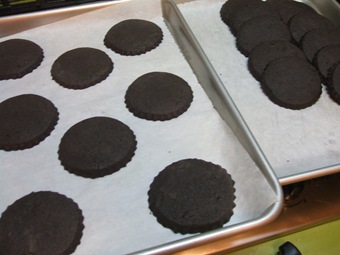 It’s hard to tell in this picture but Rach actually didn’t have cookie sheets so she used her ravioli cutter!

PLUS earlier in the day we’d stopped at the farmer’s market and seen beautiful peaches. They weren’t all the way ripe but that doesn’t matter when you make ROAST PEACHES and WHITE WINE with VANILLA BEAN. 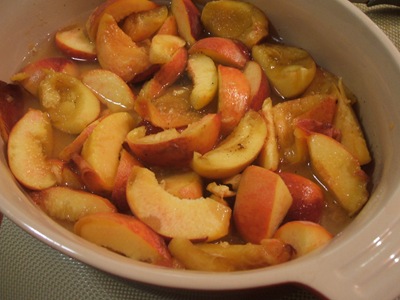 Plus after that was taken Rachel threw in some blackberries. Just cause, yknow.

The finished dessert tray was one of the most beautiful (and delicious) things I have ever beheld. 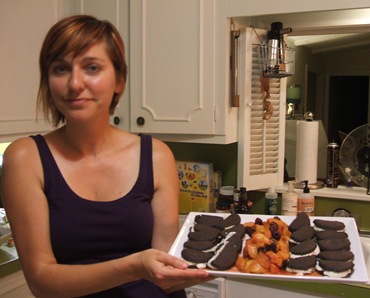 And so conclude my Austin blog posts. I hope hope hope that my future will hold more of them!

And Rachel and Richard, thank you again for being the host and hostess with the mostess. It was the bestest. Everestest.

Wow, everything looks great. My family tends to go overboard with cooking too. We might have 7 people over, but cook for 14.

What a spread- everything looks awesome! (especially the caprese... my absolute favorite salad on earth!).

You all sure do know how to cook up a storm! Looks tasty!

I wish I could have been part of that dinner, awesome dishes! :)

This doesn't look like "snacks," it looks like a gourmet meal!! Lucky girl to spend time with such excellent cooks. Those "Oreos" and peaches look like absolute heaven...coconut cream and chocolate? Yes please!

WOW! Everything looks fabulous! I'm going to have to try out that grilled eggplant!

Those look like some amazing "snacks". Love the looks of those grilled veggies. Nice cookie creation too.

wow, what an amazing trip...everything looks so fabulous, especially this "snack" party...whoa!! i've been wanting to grill up some veggie kabobs so badly, i need to find a friend with a grill and get on that!