I am going to be right sad to say goodbye to this town. I am having such fantastically amazingly good times.

This post comes after a night spent at the Continental Club dancing to Heybales, which consists of members including Johnny Cash's piano player, Merle Haggard's guitar player, and Dwight Yoakam's bass player. Unfrigginbelievable. And I do not not not know how to two-step but the Continental is full of nice boys who politely ask you to dance and skillfully lead! Oh my God I love Austin.

So I got Rich n Rach some plants at the farmer's market yesterday as a thank you for being so incredibly hospitable and basically spoiling me rotten.

These, the blueberries, are, I kid you not, called "Climax". I am sure the plant will produce very delicious blueberries... 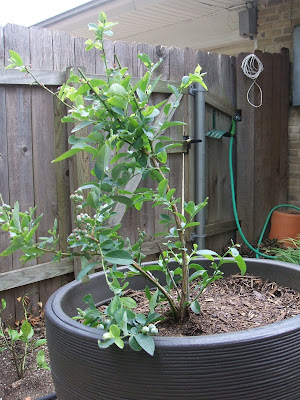 ...but there have also been a fair amount of double entendres not appropriate for a family friendly blog, particularly when one of the branches prematurely broke off.
And some pranks, such as what I discovered on my sunglasses this morning. 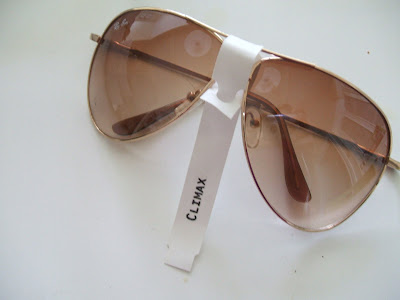 The Climax plant has taken up residence in Rachel and Richard's backyard, which is a nice mix of herbs, vegetables, and whimsy.

They are big lemur fans. 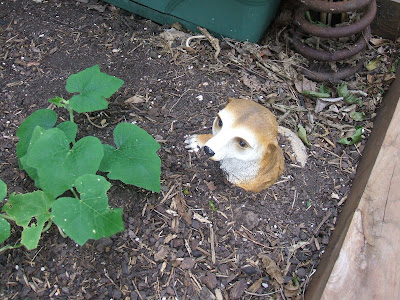 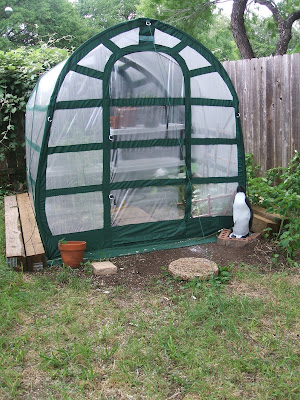 Last night Rachel and Richard had some of their friends over, and I had oodles of fun hanging out with them although wow there were a lot of Star Wars references... Richard's friends.
Hi guys if you're reading this!
Rachel and I made a hilarious quantity of food (everyone was invited for snacks and then they came and the table was overflowing... I told you my whole family was like this) but anyway that's its own post.

But I woke up and was not quite in need of a South Austin speedball (see previous post) but had stayed up til 3 (really 4 East Coast time) singing Beatles songs and drinking more wine than usual, so a breakfast taco sounded like an AWESOME idea.

Rachel and Richard go to this place every weekend and know everyone. It is a serious ambition of mine (seriously) to be a "regular" somewhere. And this place was delish and relaxed and affordable, so it's a good one for it. 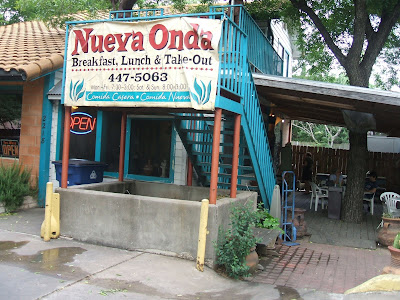 I very much enjoyed their rooftop decoration. 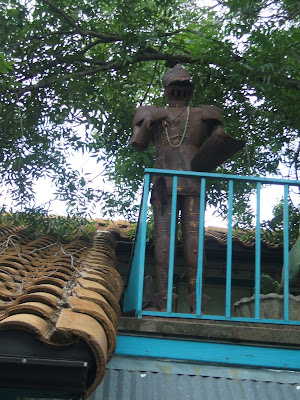 As well as my delicious tacos! This didn't really have specialty tacos like Torchy's the other day, just breakfast combos and make-your-own-tacos. I tried to go a big lighter, and fortunately these tacos were smaller (seriously, wait til you see how much I ate last night). 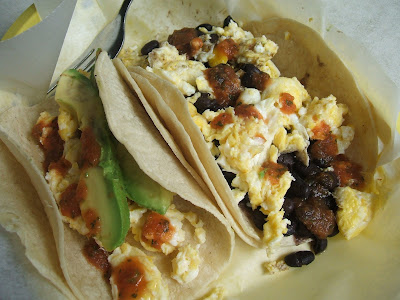 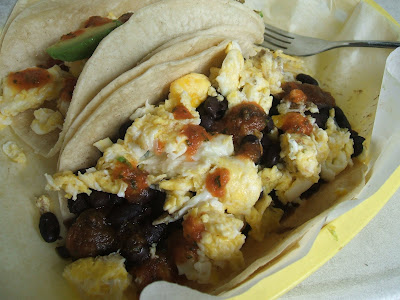 ... And an egg and avocado. Both, obviously, doused with salsa. Nueva Onda's salsa was not mega spicy, but was mega delicious. 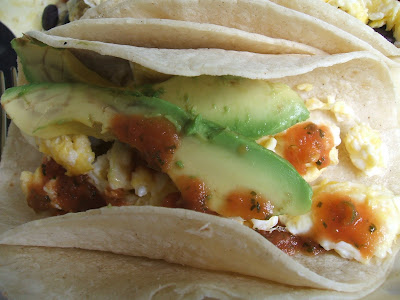 I had planned on going home tonight (Sunday). However, Rachel said that I should really stay until Monday because I hadddd to see (easily offended readers, shield your eyes) Chicken Shit Bingo!

At Ginny's, a true hole-in-the-wall on the North Side of Austin, they have a "drawing" (this is not gambling, because gambling is illegal... sure) where a table is divided into sixty or so numbered squares... 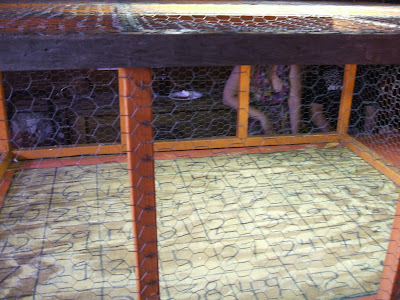 The winner is decided by which square the chicken first... excretes upon. There is chicken feed to speed things up, as it were. 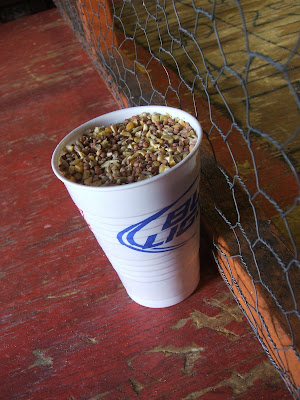 After everyone has put in their bets drawings, the chicken gets released and there is a great deal of shouting. I've been asking people about things to do in Austin and I told one girl I was going to this and she said "I've never heard people yell at a chicken so loudly!". Since I'd never heard anyone yell at a chicken at ALL, I knew this'd be quite a novelty. 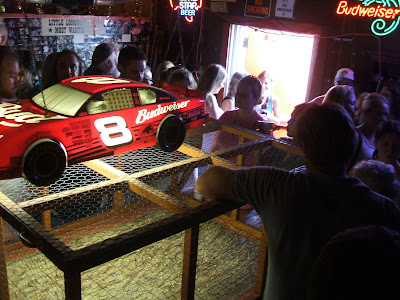 I should add that while the chicken business was going on, there was a fantassssstic band, Two Hoots and a Holler, playing (they played a song they'd recently written called, something like, "If Your Phone Isn't Ringing, It's Me Not Calling". So so so great). 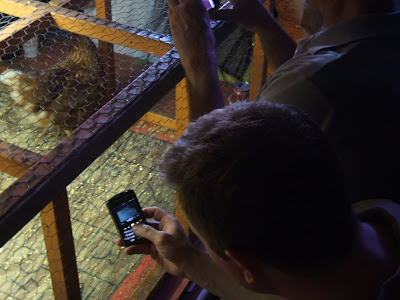 Ultimately the chicken went with 7, which is my lucky number but not the one I drew (unlucky 38). So we left

And then... regular readers know I sweat the nutrients (to a somewhat ridiculous extent, even) but today I decided to just roll with it.

To that end, breakfast tacos were at like 11, and other than a latte at Jo's (where I swear I saw Connie Britton- Anybody watch Friday Night Lights? Tami Taylor! She was beautiful and had been jogging with her friend and hugged her goodbye and got into an amazing convertible) I didn't feel like eating til... 6? And then we went to Curra's, which is vair cute on the inside and has fun mist sprayers to keep you cool in the Texas sun. 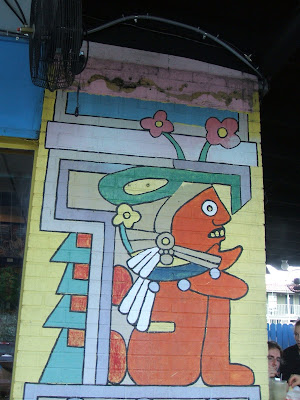 Curra's, however, is the site of a drink that took on an almost mythical quality for me after so many people told me I had to try it. 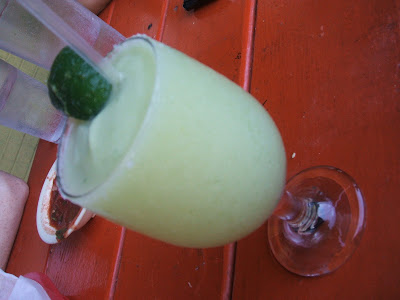 Creamy, nonmelty, and luscious with a hint of cilantro. Ohmygodohmygodsogood.

And then... I ate my body weight in chips and salsa! 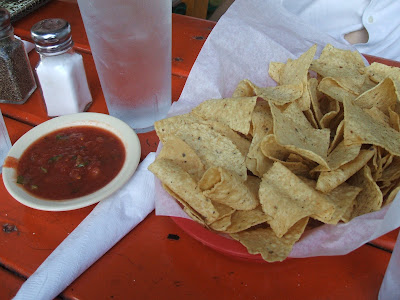 And queso, which like so much, is better in Texas. 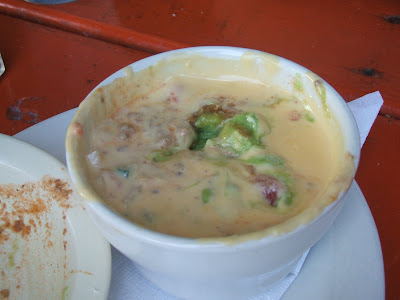 Sounds like you were living it up large in Austin!

Those tacos look so good. That is so nice that you get to have a little vacation.

hehe love this post! Favorites: the penguin bodyguard and the cheese dip snap!