My lunch today was seriously awesome. Which is good, since I woke up at 8 am on a Saturday for no reason; was packing up to go to the gym and discovered my iPod was missing; went to the gym to discover that the lost and found had seen no sign of my iPod; and then a cult tried to recruit me on the way home.

But it is a testament to the deliciousness of this lunch that I nonetheless am feelin’ good. Just behold the variety of color, flavor, and degrees of CRUNCH! 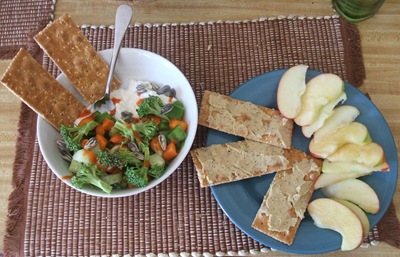 Let’s start with the bowl on the left: 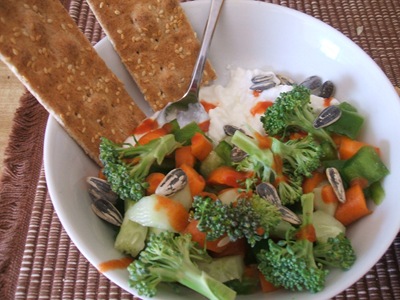 Kath posted this savory cottage cheese bowl like a month ago, and it has been on my mind ever since. I have finally gotten around to recreating it and it is SO GOOD! Seriously, there is a reason that Kath is the queen of the food blog world. She is a pro. PRO. 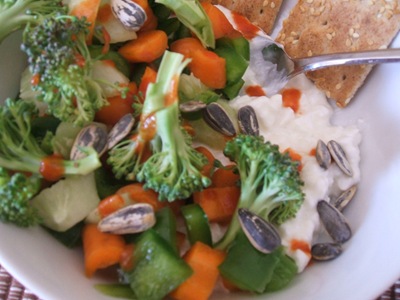 This was about 3/4 cup cottage cheese; various veggies, chopped up (last of some carrots, green pepper, and cuc, and some broccoli); sunflower seeds; SRIRACHA! (which I have been putting on EVERYTHING lately, as you all know, but Kath was genius enough to put on cottage cheese and is fannnnnnnnntastic); and two Akmak crackers for dippage.

On the other side: 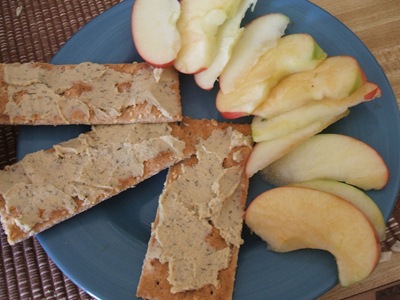 ANYway, as the title suggests, this meal was almost ludicrously crunchy. Raw veggies, flatbread crackers, sunflower seeds, apples. Should I ever have to have my jaw wired shut for surgery or something, I would want this for my first return to chewing. There is something especially satisfying about an especially crunchy meal.

YAY for crunch! :-) Your lunch looks soooo yummy - I can just imagine all the glorious different flavors and textures!

I hope your ipod shows up soon!!