I got some BIG beets at the farmer’s market! 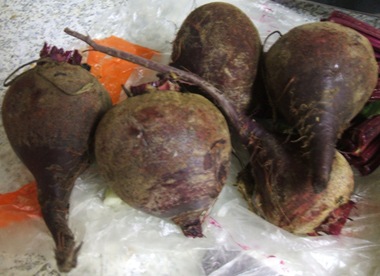 You’ll recall that I already made the greens that came with these, but the beets themselves remained to be tackled. And they were BIG. That one in the middle was approaching tennis ball size.

And… here’s the thing about beets… they can stain your entire kitchen if you’re not careful. So I undertook this with a certain amount of trepidation. But yknow what? It went okay?

I wrapped each beet in foil (no need to peel yet!) and roasted at 375* for 45 minutes for the regular sized ones, another 10 minutes or so for the huge ones. Then I peeled and sliced them (I did the unsafe but less-staining slice in your hand method. I mean, my knives are pretty dull. It wasn’t that dangerous). Then I heated up 2 tsp of olive oil in a pan on medium low and added 1/2 a large clove of garlic, and let it hang out in the warm oil just until it started to release its aroma. I just wanted to cut the raw garlic odor a LITTLE. I mean, I do want a boyfriend SOMEDAY. Then I added the garlic and oil to the beets, along with a teaspoon of red wine vinegar, and let them marinate overnight. Voila! Beet salad! 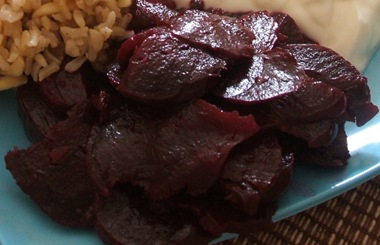 One last thought on beets- if my family is any example, people have STRONG FEELINGS about beets- they either love ‘em or hate ‘em, and there’s not a lot of middle ground. I am actually a hater-turned-lover. A turncoat, if you will. Where does everyone else fit on the beet dichotomy?

I was thinking back to a certain buffet in Greece when I made this lunch. 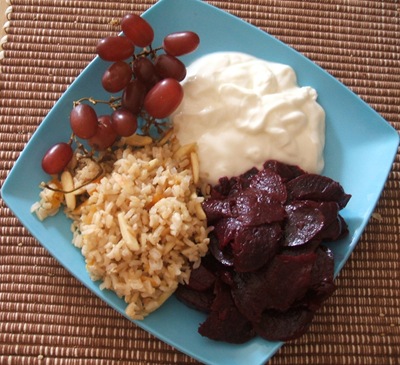 Greeks do beets very simply, and it was their technique I’d tried to recreate with just oil, vinegar, and garlic. I also had some grapies, cause they just fit very well with my pleasant image of lounging around reading philosophy and eating grapes that I’m sure the ancient Greeks didn’t actually do THAT often. I didn’t have Greek yogurt, so I strained some TJ’s Euro on some paper towels, and it wasn’t half bad.

Finally, the beet featuring buffet I’m remembering from Greece also had a super tasty rice pilaf with raisins and walnuts. I had neither of those, but I did have dried apricots and almonds, so I toasted some almonds in a dry skillet, then removed them from the heat when they were toasty, and toasted up some leftover rice in just cooking spray. Meanwhile, I rehydrated some dried apricots with a bit of boiling water. Mixed together the rice, ‘cots, and almonds and called it pilaf. Not half bad! 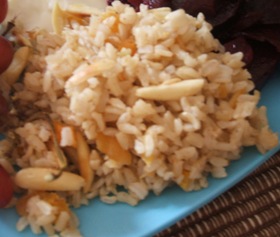 I'm a beet lover from way back. My mom used to make them all the time when I was a kid and I loved their sweetness and beautiful color!