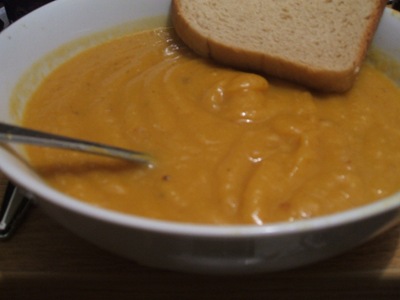 Okay back story: my December is going to be LOCO. I am graduating in December, so I’ll be dealing with finals and papers for FIVE classes (because I’m CRAZY and OVERLOADED in my LAST SEMESTER!) as well as packing up everything I own.

My last December was also on the loco side, due to a rather gruesome car crash carpooling on the way home from Thanksgiving break.

My solution to all of this? Soup. Big batches of it. Take gorgey veggies (there was a method to my farmer’s market madness!), make a big batch o’ soup out of them, and freeze in individual serving containers. Et voila, meal in a hurry with a minimum of fuss.

Soup #1: I found this recipe and was thrilled because it involved using up stuff taking up space in my fridge, like my big box o’ miso! 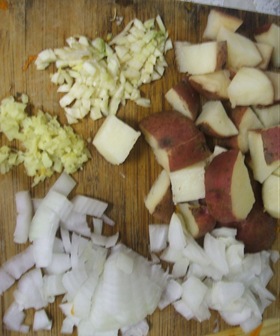 Ginger, garlic, onion, tater (I didn’t peel it. I never peel potatoes, cause I generally buy red skinned and their skins are delicious and are the healthiest part!). 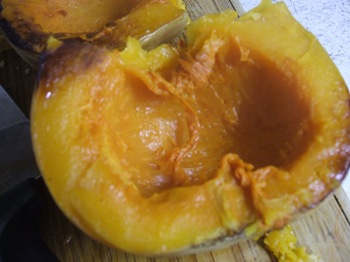 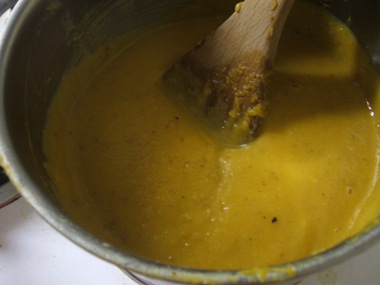 Such unusual ingredients! It was mad filling with the miso! 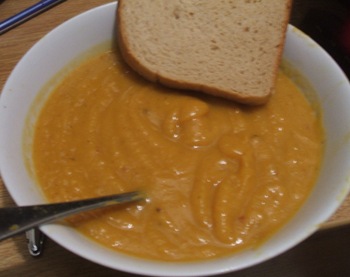 I will say, actually, that the miso was a bit much. I halved the recipe and rather than using 1/3 of a cup of miso, I used 1/4… and it was still a lot! 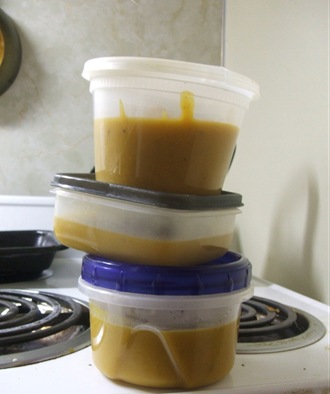 Add a drizzling of olive oil to a pan on low heat, sprinkle in some crushed red pepper flakes, cook til aromatic. Then add butter (you can see it frothing in the lower right hand corner). 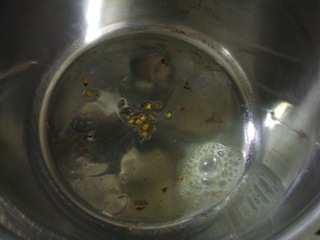 I love using a mixture of olive oil and butter- adding olive oil not only helps prevent the butter from burning, it replaces saturated fat with heart-healthy fat. My mother, who, being a proper Greek girl, is an olive-oil-eating-machine, just went for her annual physical at the doctors. He said she had the most spectacular HDL (“good” cholesterol) he had ever seen. Helllll yeah olive oil.

Then add chopped onion and garlic. Cook til golden and tender: 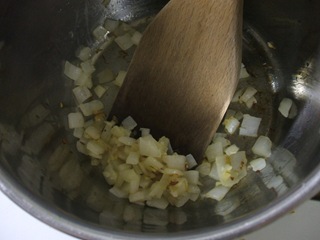 I always save the stems from broccoli. They are the most flavorful part! And in this recipe I pureed them anyway, so who cares about the aesthetics? 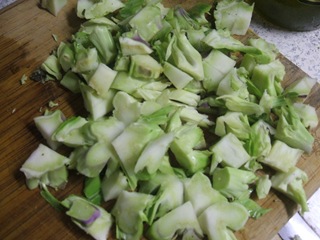 Chopped up, added to the onion mixture, and tossed around til golden. 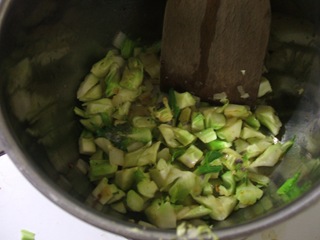 At this point, I added veggie stock, enough to cover the broccoli, and simmered til the broccoli was tender.

Then I pureed it with 3/4 cup ish of milk and a sprinkling of nutmeg: 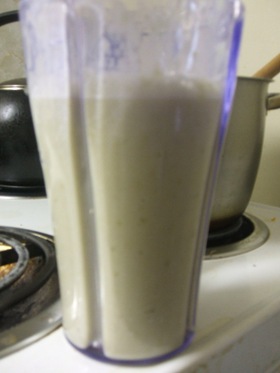 I returned that puree to the pan, and then added: 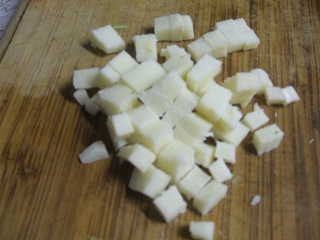 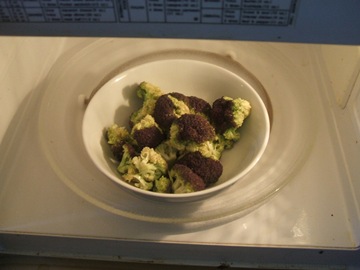 The broccoli florets- PURPLE!-, which I just micro-steamed for 30 seconds (and they probably didn’t even need that).

All together. Add RIDICULOUS quantities of black pepper (seriously, in my opinion broccoli-cheese soup cannot have too much black pepper) and cook on low til cheese melts. 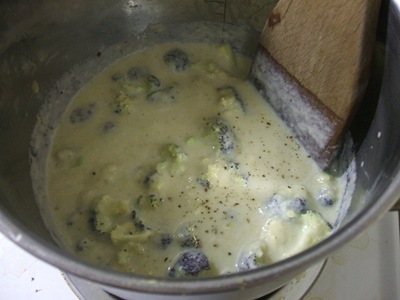 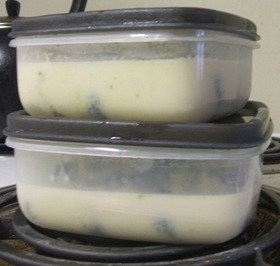 My tupperware collection is officially exhausted. I actually was short one, so I took one of the butternut tupperwares (I made that last night) and ran hot water around it so the soup came out in one solid chunk, and then I wrapped the frozen soup chunk in saran wrap and returned it to the freezer and then had the tupperware for the using! I was actually ridiculously pleased with my ingenuity!

Great job on the soup. I recently talked about soup a bit on my blog. I found some lower-sodium Amys soups that look to be a good alternative to home-made.
Love broccoli :)

That's a great idea with the soups. I often cook big batches of foods, like chicken, burgers etc and freeze them. God bless the freeze it does make our lives so much easier :-)

wow - holy soup day! You are so super productive - it (finally) seems like it's going to stay cold here so i'll likely be getting back into the soup soon!

ahhh soup is sooo comforting and good - especially during stressful times and ever increasing cold weather. i might have to take a hint from that first recipe and make that - it looks PHENOMENAL!

Wow, you're all set for a while -- well done and good ideas!

Great idea for quick meals! I love having soup in the freezer that I can defrost for a great dinner. :) And broccoli cheese soup is wonderful!

These soups look great - creamy and delicious. Thanks for the post!

I love soup in the winter. Both of these recipes look delicious. Great idea to make enough for freezing!

Good idea to make so much soup so you have plenty to eat. Especially with such an intense December!!!

Whoa! you made so much soup !! I really like the broccoli cheese one, it looks really yummy with that white creamy texture :-) Thank you for the recipe!

Oh! Your soup looks delicious, love it! And absolutely like the idea of storing for later use :-)

AHHMAZING LOOKING SOUP!!! Broccoli Cheddar used to be my favorite (I guess it still is) from Panera. I'll have to try yours. Yum!

Thanks for stopping by the blog today! You're soup recipes look lovely!