Um, guess who I saw today? 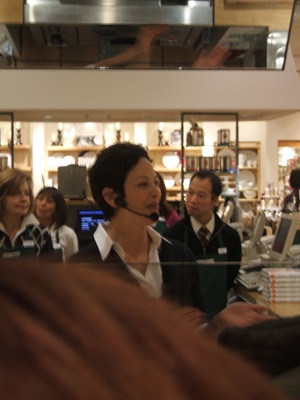 The lovely and talented Ellie Krieger! She was doing a cooking demo and book signing at Williams Sonoma, and I went, and it was fabbity fab fab!

The setup was very smart- they had a mirror up top so you could watch all the action. Here she is expertly browning meat. Sorry for the guy’s head in front of me. Homeboy was like… 6’2”? And stood FRONT AND CENTER. It’s like “um, yeah, you were here first so you have a right to the good spot, but we KNOW you could still see over our heads.” 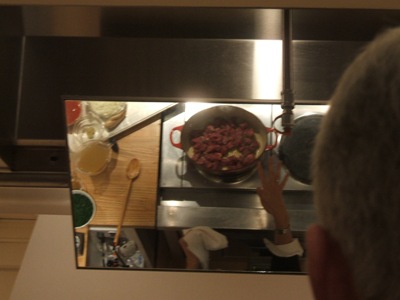 She then proceeded to expertly dispatch a butternut squash. I was pleased to see that though her chopping was perfect, she wasn’t frighteningly fast like some of those Food Network-ers. 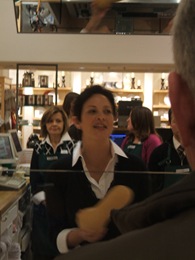 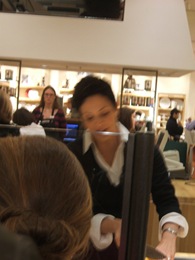 Into the dish with the browned meat went onions, freshly grated ginger, garlic, cumin, and cinnamon. Then she added the butternut, canned diced tomatoes and tomato sauce, and said to have it cook for 1/2 an hour (but, this being a professional event, they brought out the PREMADE STEW! See at right. It was just like the Food Network. I was embarrassingly excited). 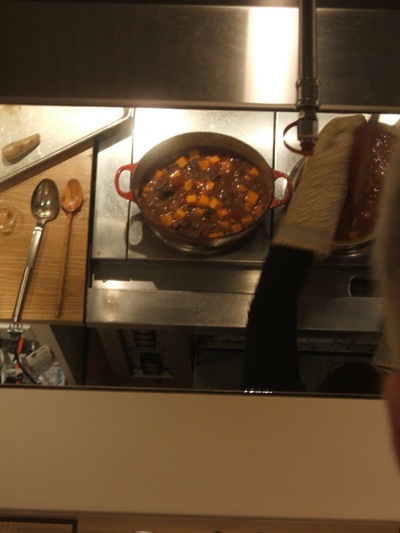 She was nice enough to do a quick Q+A before the book signing. I actually got to ask her a question!

I decided to start by telling her that she does an awesome job of updating traditional but not totally healthy foods (which we all know she does!) and then ask her if there was anything that she just couldn’t successfully recreate healthfully.

She said red velvet cake! She said she’d tried like 10 times to make a beet red velvet cake, with the natural sweetness and redness (she doesn’t like to use any artificial ingredients- which includes food coloring!). While delicious, she said it always turned brown!

Anyway, as beautiful and approachable as she appears on TV, she is like ten times more so in person. It was so cool! Here is what the final dish looked like, perched on couscous (Ellie plated this!):

I actually didn’t have any of that cause I don’t eat meat on Fridays butttttttttt there was also a DESSERT SAMPLE! 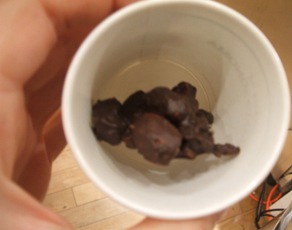 Hmm, let’s try that from a different angle: 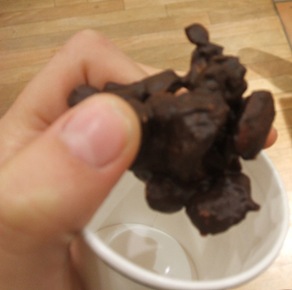 I got another piece. That was bigger :D Life is uncertain, eat dessert first.

Finally, we got a goodie bag! 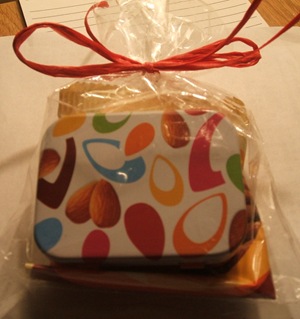 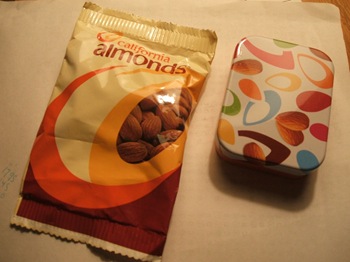 A perfectly portioned 1-oz bag of almonds and a reusable container for portion control- so you know what 1 ounce of nuts looks like and you can refill it and carry it in your purse or whatever for a healthy snack! So cute!

Another “celebrity” of sorts is oats in a jar. I am like the only food blogger left who hasn’t done it yet. However, guess what I had this morning? 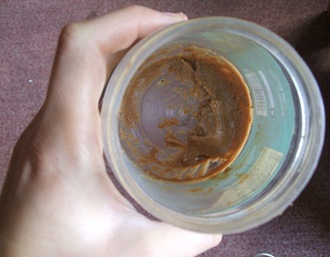 I am counting on the fact that you all know, from a bazillion bloggers making it, what oats in a jar looks like. Which is good, since I cannot take a good picture of it.

Honestly, while a fun idea and nice from a doing dishes perspective, I prefer peanut butter on top—I like having some banana-y bites and some peanut buttery bites, and I like the consistency better when it is melted and shmeared over the top rather than clumped on the bottom.

TGIF, lovies! Hope everyone’s weekend’s off to a good start!

SO COOL! I love Ellie! That meal looks wonderful. So exciting you got to ask her a question!! What a fun foodie experience!!!!

Aren't oats in a jar a life changing experience?! Ooooohhhhh YUMMY!! :) And I don't think there's any way to take a pretty picture of them, haha!

I was going to go to that!!!!! Damn I should have! That's so awesome. I just watched her on TV and I think I should go get her cookbook!

Elie Krieger seems like an awesome cook on tv. She always has great, healthy, sensible recipes.
What I usually do with oats in a jar is scrape it with a spoon as much as i can and reserve that pb for putting on top, and whatever I cant scrape leaving behind. Also, if you put the lid on afterwards for a few minutes, it melts the pb on top with the steam

HOW COOL! The meal looks wonderful and that mirror setup was pretty clever!