This Sunday was ideal.

My eats began, as all my best Sundays do, with a post-church pancake brunch, today enjoyed al fresco on the deck. With coffee and the Post! 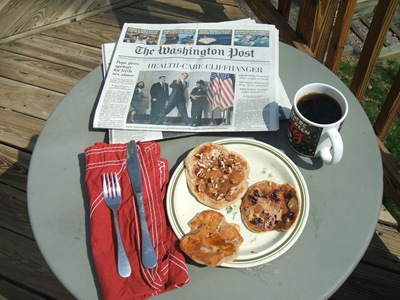 I used my new fave whole wheat pancake recipe (found on the Favorite Recipes page) and included the rather brilliant addition of a ripe banana, very thinly sliced. I tried in vain to capture, on the plate and griddle, the extraordinarily delicious banana caramelization.

I did a tasty trifecta of toppings—I could not tell you which was the best. 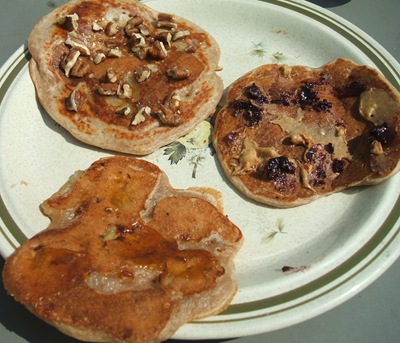 Topped with pumpkin butter in the foreground, peanut butter and blackberry (just accidentally wrote blackberrie! Aw) preserves at the 2 o’clock, and maple syrup and toasted pecans up top. Mmm mm.

This fueled me to play TENNIS for the first time in forevs. It is the one sport I am (vaguely) good at.

Then I took a jaunt to HMart and stocked up on fresh produce and goodness for ludicrously cheap and sampled my little brains out.  One could (and I likely would have were there an HMart in the vicinity of my college campus) get an entire meal out of just going around sampling. Multitudes of noodles, dumplings, fish cakes (so good!), fruits, tofu things… soooo much fun.

The consensus about my experiment last time and its iffy results was that I shouldn’t have used still-frozen spinach or water. So I went bare bones with this one, and used THAWED spinach and my exciting HMart purchase of green tea soymilk, in an adorable single serving box. 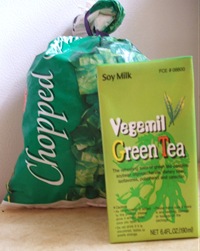 Night and day, friends! I once again did Smoothie-in-a-Bowl, but though the results may LOOK similar, the taste was absolutely fantastic! 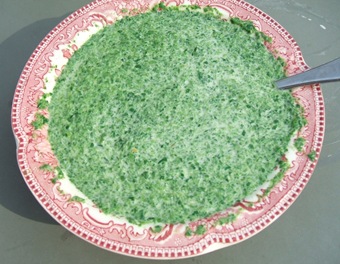 Sweet, pleasantly textured, and MAD FILLING! It’s so true, you don’t taste spinachyness when it’s cooked! It just tasted like green tea soymilk (which was yummy!).

1. Using fewer frozen ingredients
2. Drinking it in 70* weather on the decksie!
3. Accompanying it with hot tea! Along with the smoothie overflow still in the blender. 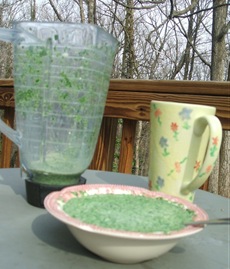 So stoked about all the possibilities now that I am a green monster believer. It’ll be great come summer!

Dinner was the return of an old friend, also better this time of year: fauxlafel! I invented it last spring. My thinking was: falafel is awesome. But who has chickpea flour? And who feels like deep-frying and making a mess and using tons of oil? I decided to use lentils- an ingredient I always have on hand- and pare down the cooking method to ensure flavorfulness and moisture without the inherent annoyance factor of frying. I love it. It  had been far too long and I had to make it again! And you know now it’s in Favorite Recipes!

This was one of the better sammiches I’ve had this year. 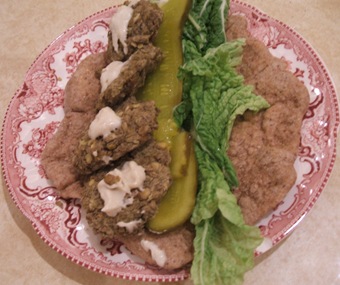 Bring water to a boil in a small saucepan. Add lentils, reduce heat to low, and simmer 30 minutes. Remove from heat and add breadcrumbs, broth, spices, oil, and salt and pepper to taste. Mash with the back of a fork until smooth (some lentils will remain chunky) and form into balls. Put on a greased baking sheet, spray tops with more cooking spray (or brush with oil), and broil 3-4 minutes per side.

They don’t look like much when they come out of the oven, but man are they tasty. 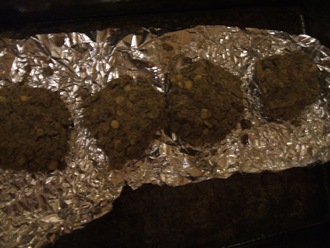 I layered them on one of my homemade pitas with napa cabbage leaves, pickles, and tahini sauce (1/2 t. tahini, at least twice that much lemon juice, stirred together vigorously). 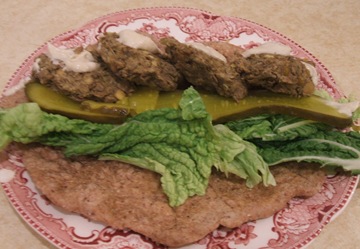 I’ve also made it with tzaziki and radishes, which was a great combo.

I was feeling dill-y, so I used this:

You keep it in the fridge and it stays almost frighteningly fresh (we’ve had it a whiiiiiiiile!). It’s good stuff. I love dill. The pickles were dill, too! Do you know I used to hate pickles?! I’m so glad I got over it! 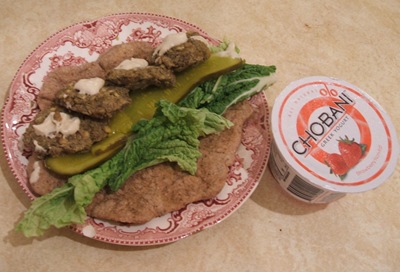 It was sort of a lunch-y dinner, which was fun. It’s odd how I like a big bowl o’ something for breakfast, a bazillion different little things for lunch, and “dinner food” (more entree-style, less sandwich-y, etc.) for dinner. But this was really good and exactly what I wanted!

I always see Green Monsters, want to do them, and then never get around to it. I guess it's because I love spinach salads so much that it just seems redundant, but this concoction of yours sounds absolutely refreshing.

And, haha, lovin the fauxlafel. I'm lucky that falafel is easy enough to come by cheaply here, but fixing my own meal is sometimes the most satisfying thing.

I love green monsters!! I have one every morning.
I have had some serious failures though! I agree with you, when I add lots of ingredients theyre usually a failure. Less is better!

ahhh my favorite pancake topper is powdered sugar and some butter. YUM you should give that a try. I know it isn't the healthiest but it is hella good!!

It took me awhile to get into the green monsters as well. I also started with frozen spinach, and I have to say: don't be afraid of raw! I made the switch: it has NO flavor and blends muccchh much better than the frozen. Try it out :)

I love falafel so thanks for the faux version! The pancakes look good too. never heard of green tea soy milk. looks interesting.

Ooooh la la! I love the fauxlafel idea! I definitely don't ever have chickpea flour on hand!

Oooh, your falafel recipe sounds delicious! I must give that a try!

I STILL have not tried a green monster! Apparently I'm missing out big time, because everyone seems to rave about them. It's just something about that color!

I love all your pancake toppings... Variety is the way to go! :-)