The other day I had planned a pretty exciting lunch but then my tummy was just… iffy. So I was like aaargh should I just eat toast? But I decided to just make it, and then I ate it, and then I felt  better! Huzzah huzzah.

A twist on the burrito bowl? 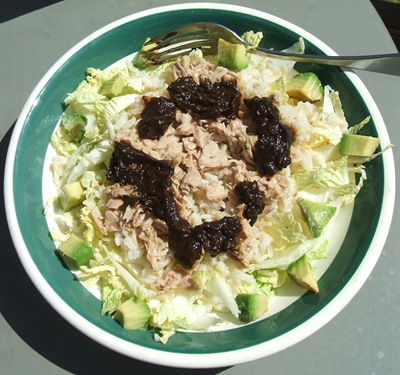 Napa cabbage, followed by brown rice, followed by tuna, and then (genius!) the leftover poblano-sun dried tomato sauce I made for my enchiladas last week. Nuked for a few just to take off the chill. And, just for good measure, some of my love, avocado. 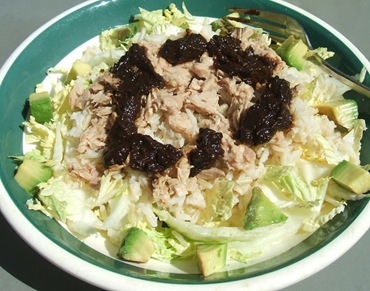 Weird but tasty! This and a cup of tummy-soothing ginger tea so revitalized me that I was still a lil hungry! 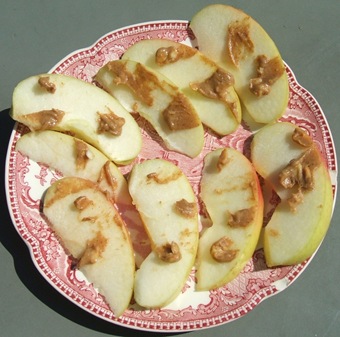 The other half of an apple I’d included in my cranberry-apple oats for breakfast, and some PB. Yum.

I really like simple food when the weather gets warm again.

It’s almost like my body has a plan- okay, in the winter I get cold, so I’ll get really really hungry and make Ileana pack some insulation on me! And in the summer, it’s hot and she doesn’t need it, so let’s have some nice veg. Smart body! 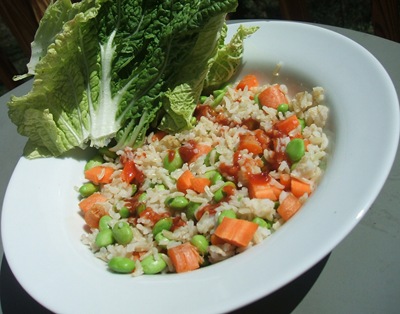 The “filling” (anything mixed together and stuffed in something can be called filling) was more brown rice, edamame, carrots, and, obviously, lotsa Sriracha. In some Napa cabbage leaves. 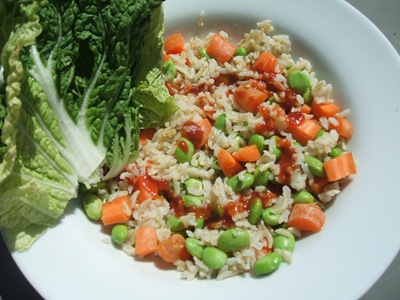 Rounded out with yogurt and sunshine. 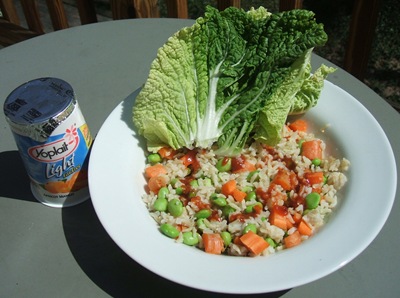 On the deck I noticed that the sweet little pansies somehow survived Snowmageddon and their seriously decrepit planter and wintered over! They’re such sweet little things. I’m hoping they’re still beautiful next weekend—I can put them on my mom’s birthday cake! 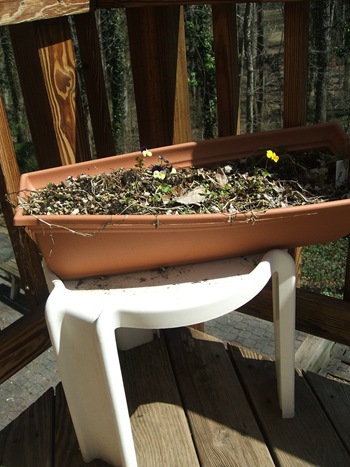 S’more products sent to me by Newman’s Own Organics to review. Numero uno: 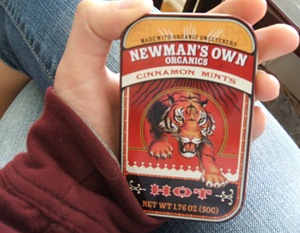 Many many points for how sex-ay the box of mints is. It looks like it would contain something way more exciting than breath freshener! 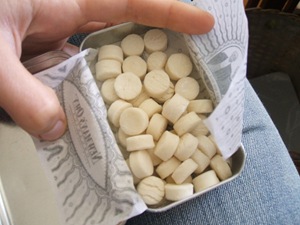 Vair similar to an Altoid, clearly. They were good. The thing is, as someone who has no problems chomping down on multiple Atomic Fireballs (I love me some heat!), when something says HOT on it, I expect hotness! This was not. Pleasantly cinnamon-y with, I swear, an aftertaste of honey. A nice mint. But hot? No.

That being said, I’ve been chomping ‘em down like candy. 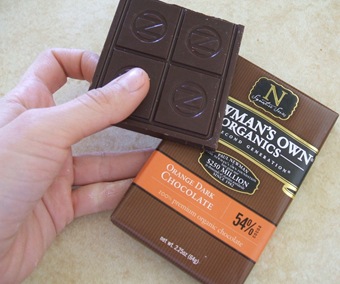 Quite honestly, for a lot of products I don’t experience a taste difference between organic and conventionally grown. Chocolate is an exception. Organic is yummier! And this bar had the perfect balance of sweetness! Yum yum yum.

Also, the whole bar (6 squares) is 320 calories, so two squares is basically a “hundred calorie pack”. I would definitely, DEFINITELY rather eat two (large!) delicious, rich, complex squares of this stuff than a bag of frightening chemical mini Oreos or something.

And now, alas, I must give my first thumbs down.

I saw these and, after my chocolate experience, I was so excited! Newman’s does orange flavor right! 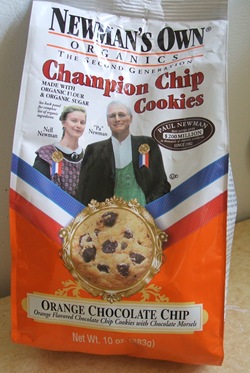 But alas, these fell prey to overwhelming orange mouth attack. It’s funny, because the candy bar I so enjoyed contains “natural orange flavor”, and these contain “orange oil”. “Natural flavor” is actually meaningless—orange oil is likely the more natural ingredient. But it tastes unnatural! Woe. Better luck next time, Newmans.

I am on the biggest Yoplait yogurt kick seriously. It is nuts. Currently obsessed with Red Velvet and White chocolate strawberry flavors.

I always get suspicious when I see "natural flavors". I'm sure it's the flavor is a natural flavor--but, then, so is cyanide, laudanum, and coolant. Be more transparent or else I'm not buying.

thanks for the newmans reviews...i have a stash of it that i havent plowed thru yet. including those mints but good to know they are not hot. sometimes that's good.

Re your gansta ipod comment. Girl. I have plenty of hardcore stuff on mine too...it's something about the nasty factor that actually propels a GREAT workout! haha! but solo. Not for group yoga teaching!

apple and pb is soooo good!!! I kinda forgot about it. I think I need to bring it back into my life!

I love rice bowls...there is something about the combo of rice and avocado that I LOVE! Looks delicious.

So glad you found your iPod...isn't that a mixed blessing though? You are annoyed that you wasted so much time looking for something that was right under your nose?

I think I have to start to eat more rice :) thanks for the inspiration!

The rice bowl looks great. I like the idea of doing it as a lettuce wrap.

Thank you so much for your super-sweet comment on my blog! :-) You always make my day! :-)

Your ricebowls are soooo gorgeous!! I love the sunny outdoor photos, too!! :-)

Your rice bowl looks BOMB. Think I'm inspired to make one for dinna ;)

YUM on the faux wraps. I love Sriracha! I agree with you on the simple food and love peanut butter with apples.