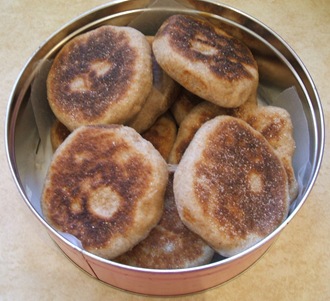 The other day I was like “there are hardly any carbs in my house, WHO AM I?”

Step 1 was checking the downstairs freezer, where there are usually a gazillion breads. Which there were, but they were mostly of the white flour kind, and I was craving some wholesomeness.

A bit of sleuthing (I was actually surprised; there’s a bit of a dearth of whole wheat english muffin recipes on the web) led me to this recipe, in which I used a substantially larger proportion of whole wheat flour (like, 70%?).

You make the dough like you would any other- proof the yeast, mix in flour n liquid (though this was all milk, no water), and let it rest for various periods of time. Here they are once all that was done. 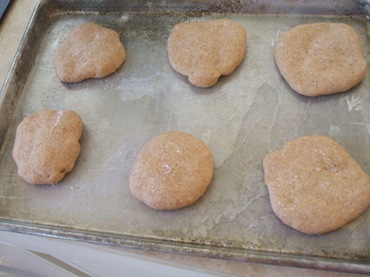 But then you cook ‘em on a GRIDDLE, like my beloved pancakes! 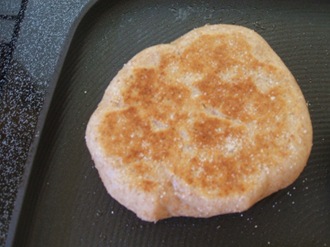 They were all the same weight in terms of dough content, but due to my lack of rolling out skills and probably also due to increasing the proportion of whole wheat flour, some were flattish and some were high and puffy. The topography: 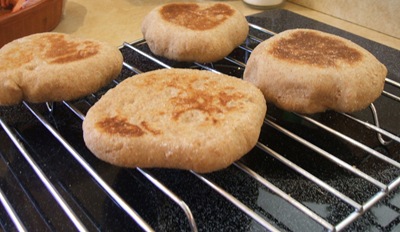 But actually, I like that! Because I sometimes want a high and fluffy muffin (like Trader Joe’s British Muffins) but sometimes want a flattish one (like Thomas’s Hearty Grains- can we tell I’m a whole wheat English muffin aficionado?).

So I forked open my first guy: 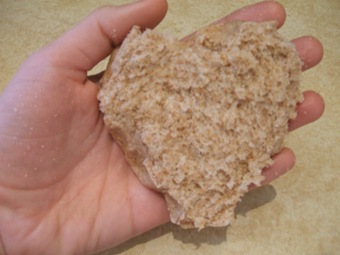 Pro: It is heart shaped!

Con: It is slightly undercooked. Though part of it was not waiting for it to cool cause it smelled so INSANELY DELICIOUS!

No prob, because who ever heard of an untoasted English muffin anyway? 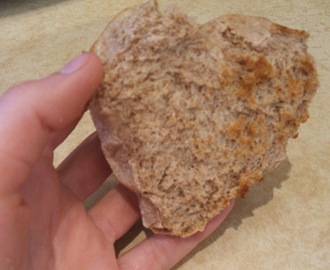 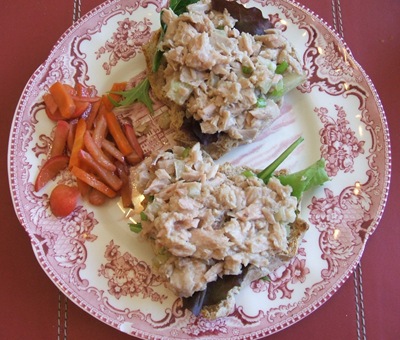 With the last of the carrot and radish salad from the other night. 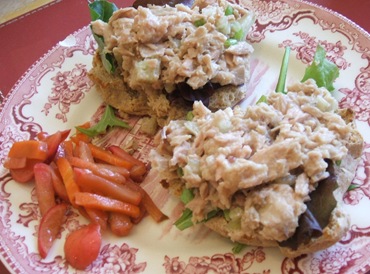 And a camera-shy Chobani (it’s not like you haven’t seen enough of those the past few days!)

When I saw this recipe for Artichoke and Walnut Fettuccini with Toasted Breadcrumbs over in Anna's blog I knew it’d be a matter of when, not if, I’d be making it. (Her blog is a new favorite of mine! I wish she were my professor!) 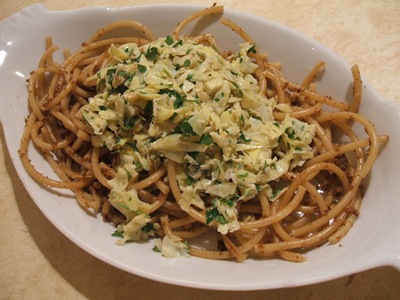 I used bucatini instead of fettucini and cut back a wee bit on the breadcrumbs, but I followed the recipe exactly for the artichoke-parsley-lemon zest-walnut topper and OH MY GOD IT WAS SO INSANELY DELICIOUS. It definitely deserves a closeup. 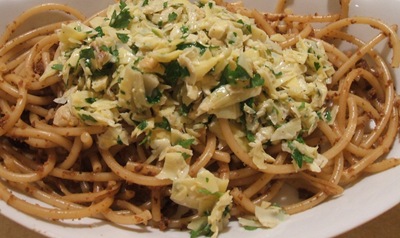 Just those simple ingredients made for a pasta topper that tasted like SPRINGTIME! And we have leftovers… honestly, it would taste REALLY REALLY GOOD on a turkey sandwich. Oh, Lent. But whatever, it’ll be an opportunity for me to get creative.

Fact: artichokes are my favorite vegetables of all time. I have no interest in being rich (which is good as I appear to be solely applying to work for nonprofits!) but the idea of being able to buy artichokes WHENEVER I WANT is, I have to admit, dizzyingly intoxicating. That is probably the only reason I’d ever want to be rich. Artichoke acquisition.

Alongside, I made asparagus the way my roomie used to make it, which I’ve decided is my favorite way to cook asparagus. 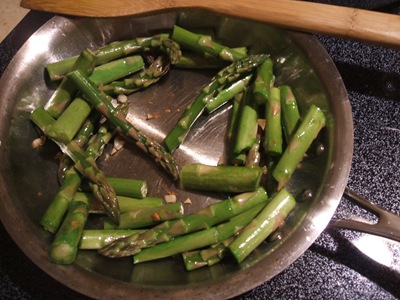 It is so sweet and delicious! I know asparagus and acid are a traditional pairing (lemon juice/zest, vinegar, etc.) but I urge you to try this method because it shows you a whole different side of asparagus.

Incidentally, three cheers for my first asparagus of the spring. HMart, I love you. 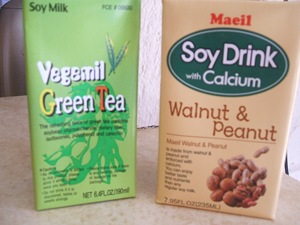 Lately I’ve just gotten one new and exciting and fun looking thing every time I’ve gone to Hmart. It’s an inexpensive way to get an international travel experience! Ish.

I tried the walnut and peanut one: 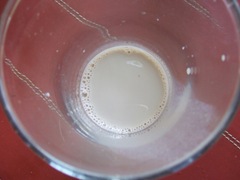 It tasted like soy milk, mostly (which I have to say I actually find really delicious and would drink all the time if it weren’t so expensive and also if I weren’t slightly creeped out by soy), but had a nice sweet nuttiness. I like!

I had it with my afternoon tea… and yes, more carbs (it’s almost like there’s something chemical going on, *ahem*) 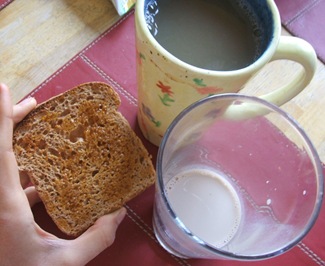 those mini-pancakes are cute and pudgy. Love it. I experienced the same thing as you, I tried to find the carbs and bread like a mad-women, oh the crazy stuff carbs will get you to do.

Those english muffins look so good. I've never tried to make a bread but these are so tempting!

wow, those homemade english muffins DO look LEGIT. Congrats, you're a rock star!

Today I was seriously craving some carbs in my life too! I was in the mood to bake some whole wheat bread but I had no yeast, the bread turned out good just a tad bit flat, LOL. Your muffins looks yummy, and that pasta definitely deserved a close up ;)

Mmm I haven't had those in forever.. crackers have taken over my life.

Woah, we have the EXACT seem plates, bizzarre!

I'm super impressed that you made your own English muffins, they look professionally done!

Those English Muffins looks so prefect!!!! You rock!

This was definitely the first time I've seen anyone make homemade English muffins and yours look amazing! I'd love to try it out - did you find it to be an easy process? Was the other 30% of the flour all purpose or bread flour?

You literally make everything I want to eat, ever. OMG OMG home made english muffins! I just added that to my list of must-do's. Yours look AWESOME!

You're big time lady! Wow do I need to make more of an effort in the kitchen. Ah ha ha

I am so glad these turned out well. Now I am more confident about being able to make them in the future. I'm impressed.

Fightingwithfood: Yes I found it pretty easy- as long as you've baked bread before, you know about kneading and letting it rest (and even if you haven't, it's just following directions for timing!). And for the non-whole wheat flour I used all-purpose. I actually added a little bit of cornstarch, too, because that ups the gluten and makes it more like bread flour (supposedly. I have no idea if it made a difference!)

Everything looks wonderful. I'm intrigued by your muffins. My batter is always so moist I need rings to cook them. I'll have to try your recipe. I really like your blog and will be back often.

Haha, you are the girl of my dreams. Artichokes are incredible is every way imaginable, as are English muffins made less proper on the griddle. Everything else has me drooling. Well played, my friend. Well played.

Will definitely try eggplant next time I'm in Full Kee.

How long are you in DC area? Would love to meet up for lunch (orchidgirl1979 at gmail)

Home-made english muffins? YES PLEASE! I will def. be looking into making these.
<3 jess
xoxo

I adore your eats :) they look so yummy. I love the fact that you're (part) Greek. I went there last year during Xmas (Athens) and the food was AWESOME. I've never had better in my life :)

And thanks for stopping by!