Good grief this was beautiful. 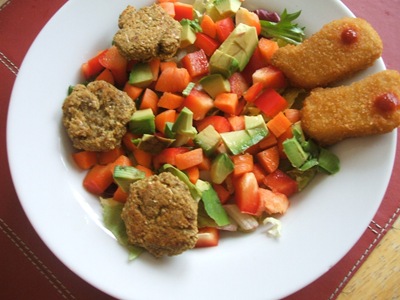 What wasn’t in this salad? Last of a bag of greens, 1/4 an avocado, red pepper, carrot, the last of the falafel mix, and the last of the TJ’s chickenless nuggets. Quite honestly, it was an avocado vehicle. I made sure every bite had avocado in it! Heaven. 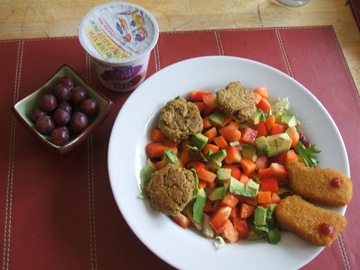 More fun cleaning out the fridge- oats in a jar! 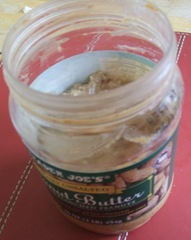 The thing is, I’m so neurotic about scraping down my jar that usually there isn’t actually enough peanut butter left at the bottom for a full serving. So I  put a little from the new jar on the top :D Smashing new recipe, though it doesn’t look like much: 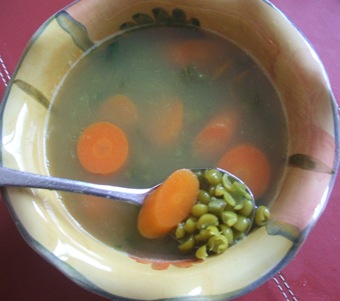 Another from Lord Krishna's Cuisine (incidentally, Krishna is Padma Lakshmi’s baby’s name! She’s sure to be a foodie.) This is Indian split pea dahl soup. Along with traditional peas and carrots, it has turmeric, ginger, cumin, green chiles, asafetida, and packs a PUNCH! 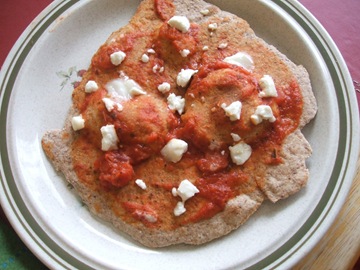 We just had leftovers for dinner the other night but my mother insisted I photograph her beauteous salad. 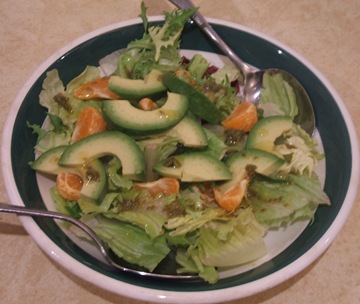 The recipe (which I found through Shannon at tri2cook) is friggin’ amazing. Except the part about there being four servings. That’s a hilarious joke! 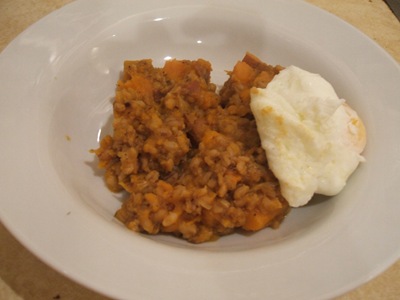 Per the recipe’s suggestion, I topped it with a fried egg. I gave my mom the decent looking one, seen above… mine, seen below, was pretty busted: 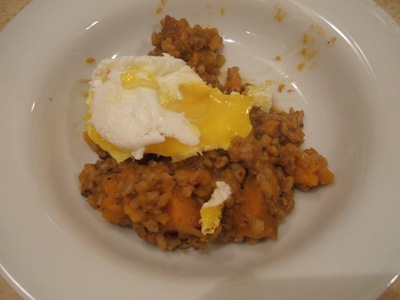 I managed to somehow overcook the yolk and undercook the white. That is a somewhat noteworthy accomplishment.

Here’s a better look at the remaining hash, which I quickly dispatched (my mom ate some but I went craaaaaaaaazy on it) 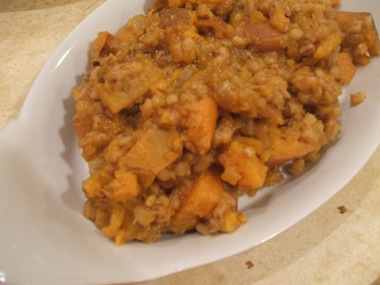 Seriously, how can a recipe with 5 ingredients taste so complex and delicious?! Toasting the barley first gave it an unbelievable flavor. The sweet potato was at its rich sweetest. So great.

Part of it, to give myself some credit, was probably due to the fact that the vegetable broth I used was homemade!

I always, always, save my pepper tops, carrot tops, cabbage cores, celery hearts, onion tops, mushroom stems, etc. etc. etc. and make stock with ‘em. Just keep them in a bag in the freezer til enough accumulates, then stick them in a stockpot… 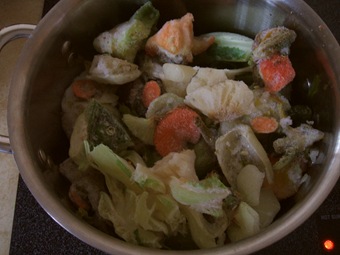 Then cover with water and boil for a few hours, et voila… 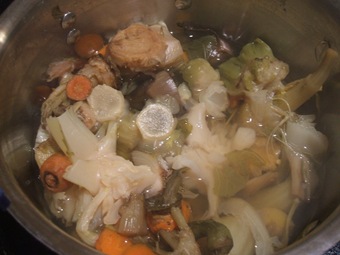 Finally, I WON ANOTHER GIVEAWAY! Look at the massive box I got that sort of dwarfed my kitchen table! 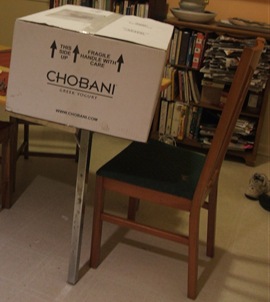 Thank you ever so muchly to the fab Chelsea over at Chelsea's Chew and Run Fun. I will inhale cherish them! 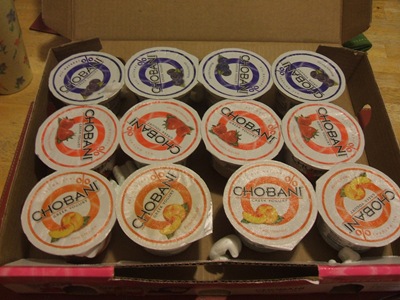 That first salad looks so beautiful :) I love when there are so many nutrients all in one place :)

I've bookmarked the barley sweet potato recipe and will be making it VERY soon!!!

Congrats on the giveaway!! I love greek yogurt and can't get it here, but whenever i'm in the states I bring back a whole bunch ;)

Congratulations on the gorgeous chobani giveaway! I adore those exact chobanis - I bring them home by the case from the bulk foods store!! :-)

Your salads are positively gorgeous! I love the dainty drops of red on the TJ's veggie nuggets - such a posh garnish! Oh my goodness, the barley sweet potato hash sounds SO amazing...

Ahh I wish my clean-out-the-fridge salads looked as good as yours!

Congrats on your giveaway win.
I love love love peanut butter. I put it in my oatmeal too. :)

Congrats on your win. I love Chobani. You are so lucky. What an awesome idea to make a salad out of everything before you have to throw it all away.

Glad they got to you! Enjoy them. I've been a big fan of them in my morning oats.