Like, I suspect, a fair proportion of Americans, I was due for some LIGHTER eating today. After the sample extravaganza at the BVFF, I still managed to put away a LARGE plate of Afghan food for dinner with boy at The Helmand which, incidentally Bostonians, was one of the best meals I’ve had in recent memory.

And then, yknow, Halloween parties.

So today, I wanted good whoooooooolesome food. I began after sleeping in later than usual and then lounging around waiting for an appetite with good old cereal: 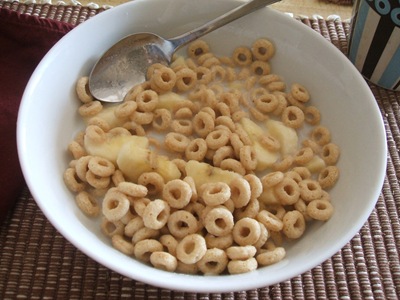 Lunch was a repeat from an idea I came up with a few months back- SO GOOD. Hollow out 1/2 a big tomato, dump out the seeds, chop up the flesh. Mix up the flesh with 1/2 cup white beans, dried rosemary, black pepper. Nuke and mush a bit, stuff back in the tomato. YUM! I did a faux-bruschetta on the side with the leftover tomato juiciness dumped on top of a TJ’s whole wheat British muffin. So good! 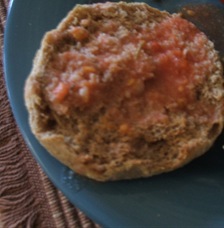 Still a bit peckish, so I had a seriously delish yogurt- I’d never had the apple turnover flavor before and I’m wanting to go buy like 15 more! 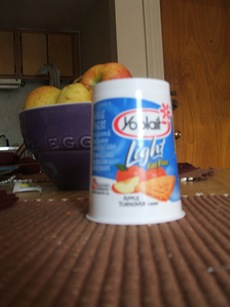 Posing with my pleasantly overflowing fruit bowl in the background :D Yes, it’s a fruit bowl, despite saying ‘eggs’ x_x

Dinner I had a friend over, and she’s basically a carnivore, so I made meaty meat. I briiiiiiiiined the pork chops because I remembered the best pork chops ever I made this summer using a brine. This time, I let my two chops hang out in 2 cups water+ 2 T salt+ 2 T sugar+ 2 T apple cider vinegar+ sprinkling of dried rosemary. Then searity sear for about 4 minutes on each side, and kept in a warmed up oven til my friend showed up. 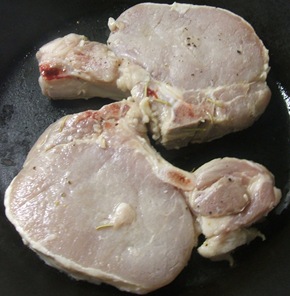 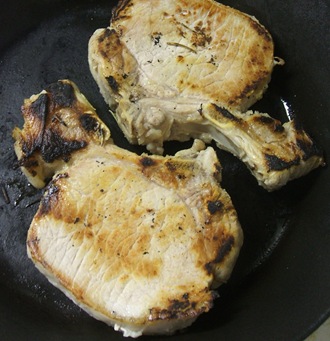 Brining works MIRACLES! They stay SO MOIST! See how they didn’t shrink?

On the side, I had roasties: 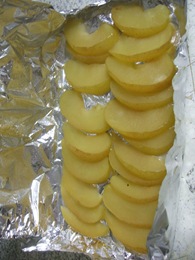 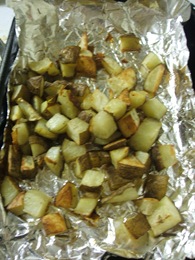 Apple slices in a foil packet, tater slices with olive oil, salt and pepper, and rosemary. Both baked at 350 for an hour. TASTY TASTY! 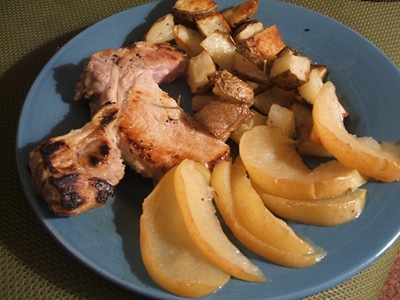 Ze plate. Saved a bit of the pork chop for leftovers, which I’m sure will be rockin!

So it was a nice dinner with my friend (followed by fun girl talk and Waking Ned Devine, which I’d never seen and loved!) and generally a nice day. I am now feeling appropriately detoxed :D

Here’s to a good week ahead (with an eased Monday morning thanks to daylight savings!)

Love that tomato idea ... it sounds so good!

those english muffins are my favorite brand, and I always need to grab them when I'm near a TJ's.
I just found your blog and am so excited. I was a BUA student last year, but now I've moved on to Brown.