The evening began with Steve modeling with the olive oil. 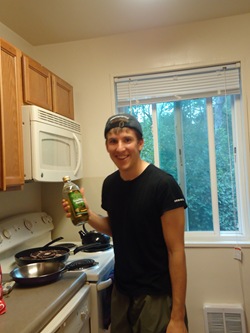 Then throwing pine nuts in it. Good start, Steve! 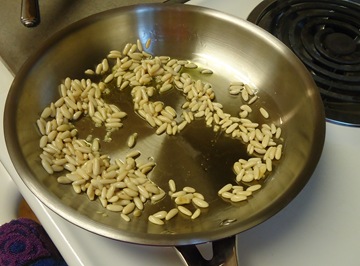 Carolyn: This basil is bad! Throw it in the sink!
Steve: NOOO! THIS BASIL IS FINE! 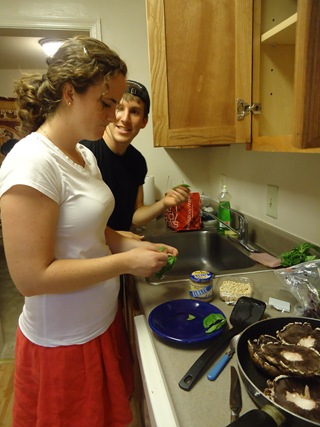 (Guys, the basil was *fine*! You can just take off the brown spots! Never ever waste good basil!) 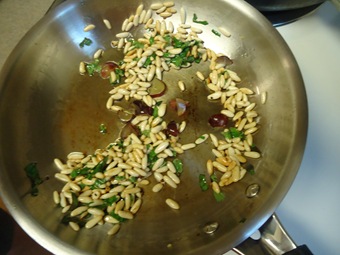 (Oh yes! Steve is a highly improvizational cook but dayum this was good)

Along with the eclectic mixture, the main ingredient: 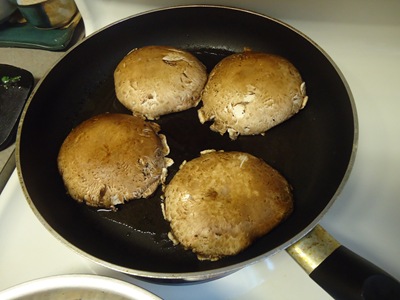 All cooked down and juicy and scrummy. 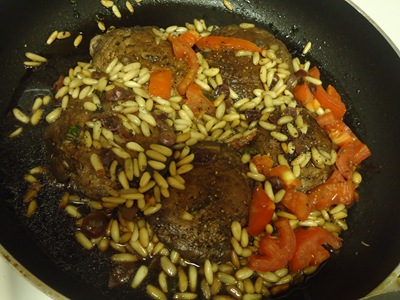 “Ileana! Ileana! You have to get a picture of my fruit plate!”

Erin (who does not cook) made a lovely fruit plate. Made of dumpster diving tangerines. 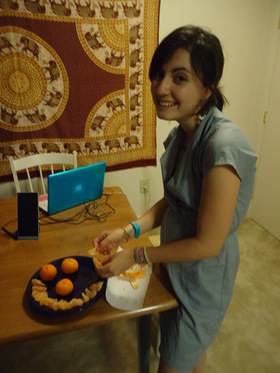 Okay guys, so this post has had some whimsy, but on a serious note: Carolyn’s rosemary potatoes.

Her potato chopping intensity required the endurance of the combined efforts of a Camelbak and a glass of wine. 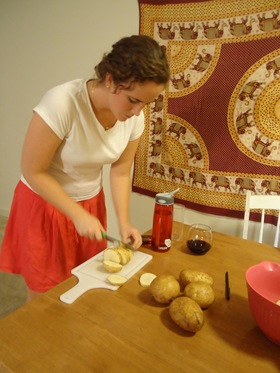 The potatoes are basically an olive oil delivery system and are among the most delicious things ever to pass my lips. 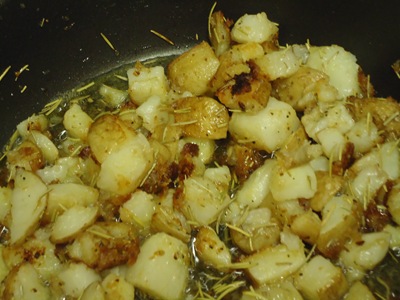 If those rosemary potatoes are wrong, I don’t want to be right.

And so, our smorgasbord.

From the top, some dumpster tangerines, a luscious portabella, some garlic bread (that some neighbors apparently abandoned in the hallway for eight hours so people just started taking? We are in Americorps. We aren’t even technically “workers”, we are “volunteers”, and thus don’t get “wages”), potatoes (multiply the amount in that picture by… 5?) and my Mango Dal. 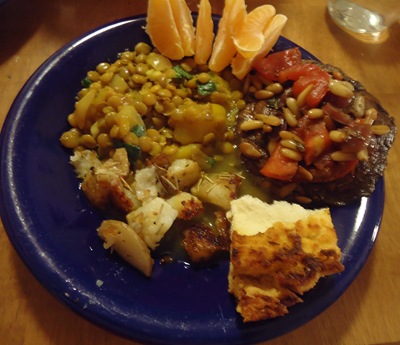 Here we are all together in Erin and Carolyn’s beautiful apartment. (Erin was photographer, but based on my facial expression, I probably should’ve stayed *behind* the camera). 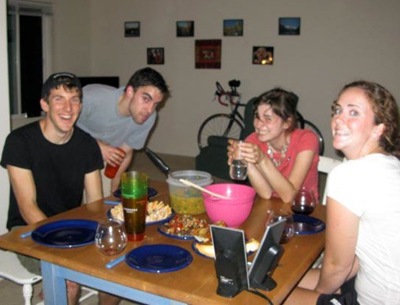 And here is one I took on Erin's classy camera: 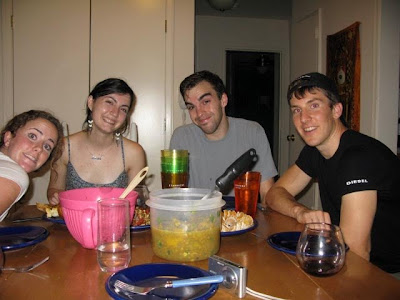 Erin made us do secular, circular grace which was basically like Thanksgiving where we went around saying things that made us happy.

Kyle (the guy who looks a bit bro-ish in the picture but is in fact very nice, who showed up midway through after buying a bike, thus the aforementioned bike in the background) pointed how nice it is for people our age to sit down and cook and eat together as that’s not necessarily how we usually spend our time. Ahem.

A final note- the Mango Dal (from Eating Well magazine, I’ve made it before) is serious business.

Steve went a little crazy on it, actually. He made a long, impressively intellectual statement how most foods have diminishing returns- the more you eat, the less satisfaction you receive. This mango dal, however, just keeps gettin’ better.

It was arguably the greatest compliment I have ever received.
Posted by Lele at 1:27 PM

The potluck looks fantastic! I <3 potlucks!

hey girlie!!
wow steve sounds like quite the cook! grapes?...it looks so yummy! I am cravvvving meaty mushrooms right now! :)
I hope you continue to have a great weekend!
xoxo!

That looked awesome! It must be great to be able to cook/eat with people who are vegetarians or at least willing to eat a vegetarian meal! It's like pulling teeth around here, haha :-)

DAMN!!! the whole plate at the end with everything on it looks SOOO APPETIZING! i hope theres many more pot lucks to come!! haha u put the luck it pot-luck, good job team <3!!

Wow. I think next time, you and Maya and I should have a blogger potluck, and you bring about 3-4 dishes. Yes? deal.

my oh my - what a wonderful plate of flavours! Great job!

Those rosemary potatoes look delicious, I must try making them at home too :)

Those rosemary potatoes look delicious, I must try making them at home too :)