So I had a highly, HIGHLY uncharacteristically savory breakfast Wednesday morning. 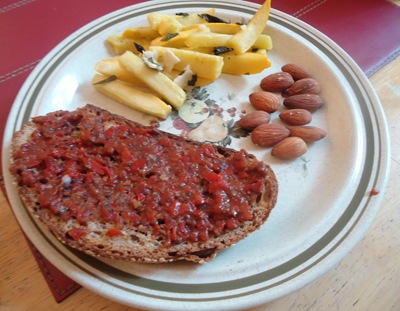 Here’s the thing: with the job I don’t have a lot of time to eat during the day. It’s always kind of zooish. Also, I do a lot of activity during the day (active running-around games with the children, hauling boxes full of food bank food up three flights of stairs, hauling MYSELF up three flights of stairs [the center where I work is on three levels and I’m constantly running between the basement and top floor]).

Anyway, so I get home at night and eat my little brains out. Often of the sweet carbish variety. Am slightly concerned at what I am wreaking on my blood sugar.

SO I woke up Wednesday morning after eating my body weight in dried fruit and granola the night before (man my “junk food” is pretty hippie-ish, eh?) and I wanted NOTHING sweet. My usual breakfasts- oatmeal, overnight oats, cereal, yogurt parfaits- are fruit packed and sweet and I just wanted nothing to do with them.

So I went to my fridge and thought well hmm. I freaking love that muhammara. We’ve still got a bit of farmer’s market bread left; let’s put it on top of that. Also, I made this seriously delightful concoction Tuesday night of squash tossed in olive oil with garlic, basil, and shaved parmesan, so I finished that off. And for protein, some nice roasted almonds! 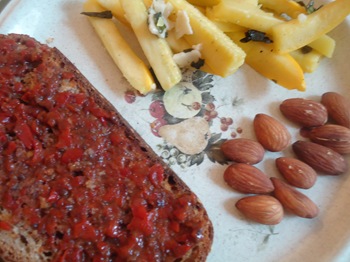 It won’t be an everyday occurance, but it hit the spot.

Rounding it out, I made a homemade chai latte! 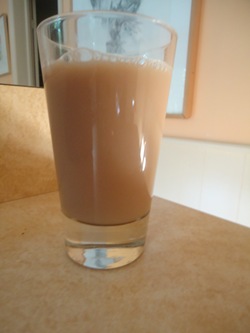 The genesis of this project was this: my mom cleaned out our garage.

So, with all of our old cookie tins (which we save for next Christmas when we then give cookies away- and then get given some in return, thus having tins for next year), we also had a big ol’ vat of mulling spice (for apple cider, etc.): 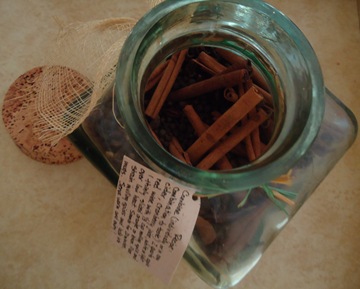 So my mother has started brewing it with her morning cup of tea for a chai experience. I took it a step further and Tuesday night made a pot of tea and mulling spice. Thus, Wednesday morning I had a delicious superconcentrated tea which I then mixed with milk (organic!) for a latte.

I decided, what the heck, I’ll pack one for work later sometime I need a caffeine break. 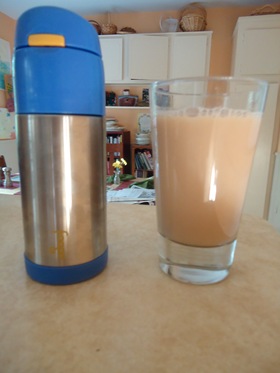 Slightly more normal breakfast (what a certain Smart girl calls the CFY), though still atypical for me.

Usually I want a rib stickin’ breakfast and prefer airy cereal for a snack. However, my ribs were already pretty… stuck when I woke up on a recent morning, so light and crunchy (with some crisp and some tang) sounded good. 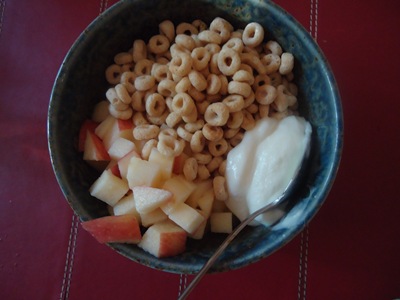 To that end, I combined Cheerios, chopped apple, a few yogurt globs, and just because cereal seemed wrong without it, some milk.

It was delightfully voluminous, and also provided wonderful texture and flavor variety.

I get seriously irritated when women’s magazines, in their How to Starve Yourself sections, suggest that if you crave grainy crunchy snacks (like chips and crackers) you can just replace them with crunchy raw fruits and vegetables.

And like, puhlease. I love raw fruits and vegetables, but they are CRISPY, not crunchy. You need grainity grains for crunch. 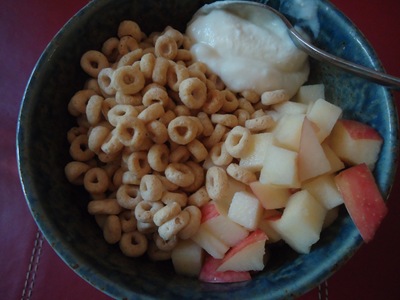 As usual, I took my pretty (ish) blog pic and then made a delightful mess of my bowl like the four year old I (mentally) am. Fun in every bite! 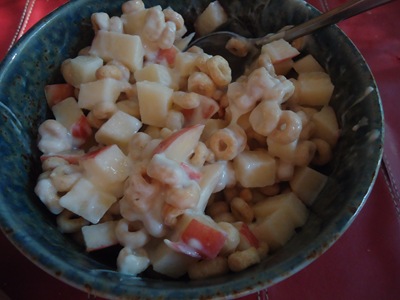 Finally, a breakfast product I’ve been eating TONS of, but not as actual breakfast: 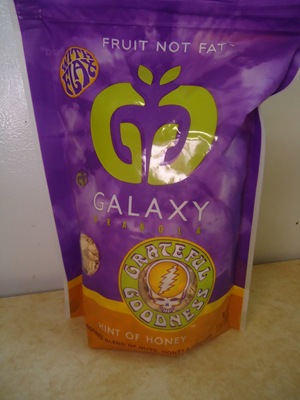 The delightful people at Galaxy Granola have once again sent me a care package of delight. I was SUPER EXCITED to try this new stuff, because it boasted nuts and honey and graham flour as ingredients and to me that sounds like yummy baked-good-reminiscent childlike snackables disguised as healthy breakfast. 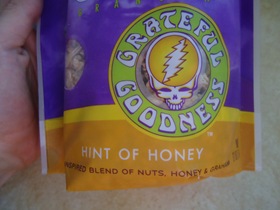 The ingredients are just whole grains, fruit (like all Galaxy granola, it’s baked in apples and thus has no added oils and 0 grams of fat per serving), and honey and nuts.

Like all of the granolas made by Galaxy, this one gets point for textural variety: 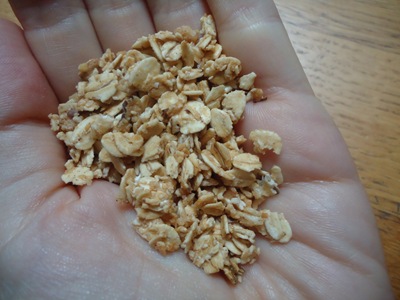 Most eminently munchable were what I think was crispy rice (but was way less airy than typical puffed rice- it gave a serious, solid crunch!), and the walnut bits, which were seriously jacked up with honey flavor in addition to the walnut’s natural awesomeness. 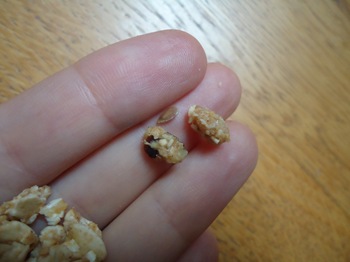 This one also just gets points for being AWESOME! I’ve had issues with other flavors made by this company being bland, but there are no such issues with this honey-nut-goodness. The flavor from the graham flour (I’m going to go on record as a graham cracker junkie) also adds something really unique.

Lele, finally getting the chance to read about your job and the trip to the apple orchard brought tears to my eyes... The good kind. :-) You are amazing. :-)