So I am kind of a food snob. I like making fun and fancy new recipes and trying new ingredients and techniques. I like to think that with my current state of life (i.e. almost constant boredom) this blog has been sort of exotic lately.

I think food bloggers in general like to think we are superior to standard Americans. Well and we are. I don’t see a lot of people posting an Egg McMuffin for breakfast, burger for lunch, fourth meal at Taco Bell (eesh!) and some KFC for dinner.

That being said, we like to pretend we are always mixin’ it up with exotic stuff. But let’s be honest… a lot of things appear over and over (at least in my blog). 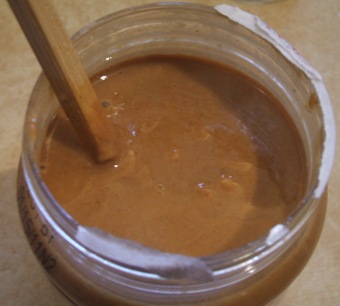 (a tip: that’s a chopstick stickin’ out! Excellent for stirring  a new jar!) 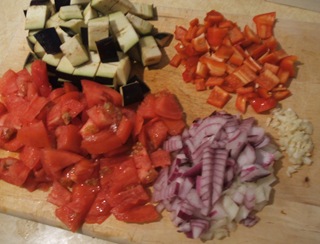 This recipe was another winner from The Ethnic Vegetarian.

What do you call this? 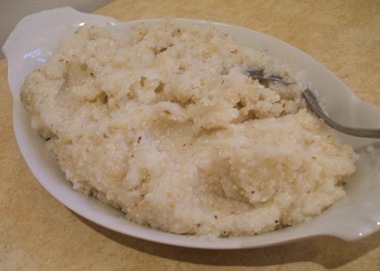 The fancy-shmancy title from the cookbook was “Kenyan Polenta” with Peanut Sauce. The hard-to-locate-stateside inspiration for the recipe was ugali, which is Kenyan rice porridge. The actual ingredient used was good old fashioned grits.

I amended the recipe based on what I had and kind of 2/3dsing it. I’m calling it what mine turned out to be!

Peanut and Vegetable Stew with Grits (adapted from The Ethnic Vegetarian)

Heat oil on medium heat in a large frying pan or skillet. Add onions and garlic and cook until golden. Then add red peppers, tomatoes, and salt and pepper, and cook another ten minutes. Add eggplant, and cook another five minutes. Combine peanut butter and water in a separate bowl (or, if you’re lazy like me, just add them- nothing bad happened) and add them to the mixture, along with hot sauce. Reduce heat and simmer ten minutes, or until eggplant is tender.

Meanwhile, bring water to a boil. Add grits and, stirring constantly, cook on low until grits are thick and… grits-y! Add butter to taste. 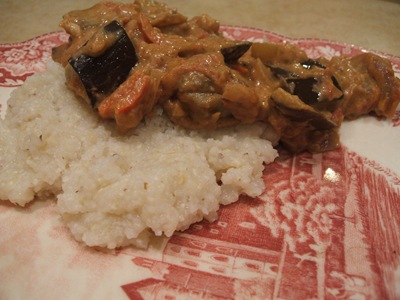 A note on this recipe: it is good on the first day, but if you can make it the day before you serve it cause it’s SUBLIME once the flavors are allowed to meld overnight. 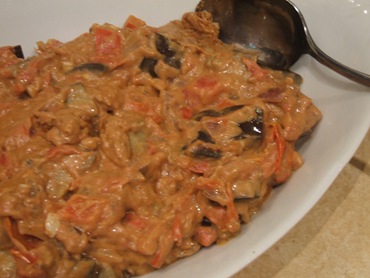 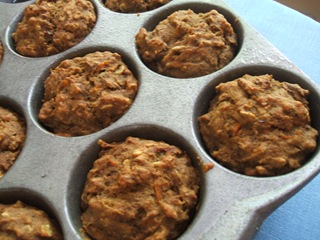 I could SWEAR I had already posted this recipe but apparently did not. It is a good one! Carrot cakey, dare I say?!

Preheat oven to 375. Bake 5 minutes at 375, then reduce oven to 350 degrees and bake another 15 minutes, or until a toothpick in the center of a muffin comes out clean. 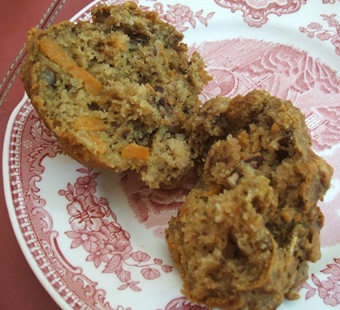 I definitely have these less than other food bloggers (WAY less than some) and first thing in the morning is just too hardcore for me. But for the occasional brunch or lunch, they are pretty great.

This one was not so much green as… let’s be charitable and call it purple (rather than gray!) 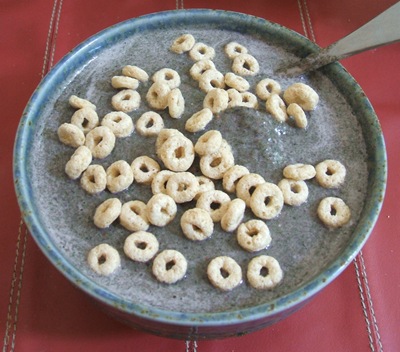 Into the blender went:

Then I started blending and it was wayyyyy thick with the berries so I added more water.

I bet that "sauce" would be fantastic over pasta or zucchini "pasta" too. The muffins sound like the perfect afternoon snack.

I try not to post the same things too often, which means a lot of days I'm left without anything to post about!

That looks so good! Any recipe that incorporates peanuts is good in my book!

I can't do green smoothies in the morning, either. My stomach would never forgive me. xD

Good idea to stir nut butter with chopsticks!! And I loove grits. Definitely saving that recipe :)

Haha, in my "previous" life I could have easily started a junk food blog :) lucky me I have now changed!