This was one of the recipes that made me pick out The Greek Vegetarian at the library. The money shot, if you will.

It did not disappoint. There are so many varied and sometimes bizarre methodologies for cooking eggplant. It has its challenges: it can be bitter, it soaks up olive oil/fat like it’s its job and thus can become greasy; the texture can go in a lot of different directions.

This one had you thinly slice 3 large eggplants (I used four medium/small) and salt them and put them in a colander to drain for an hour. 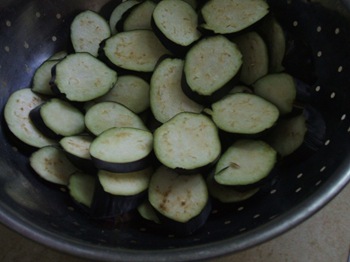 At which point they were coated with little droplets of dirty-looking water. So weird! You then rinse them and pat them dry. 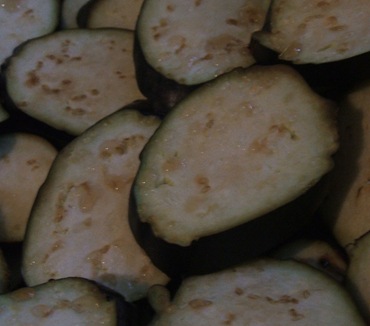 Then you give them a broilsie, brushed with olive oil, until they are golden. I likely used wayyyyyyy less olive oil than my Greek ancestors. 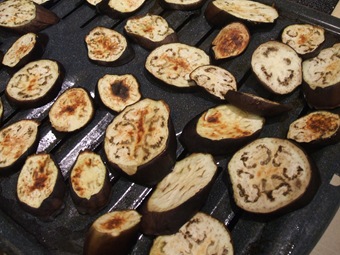 Meanwhile, you make your sauce. Take 1/2 a cup of walnuts. Grind em. 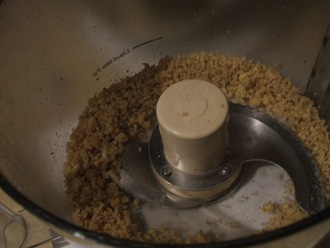 Give it a blendity blend until it turns, as she accurately puts it, “a strange mauve color.” 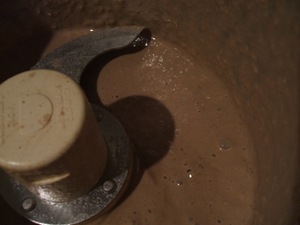 Then arrange it in a roundish flattish dish in circles, overlapping. This was really beautiful as I looked at it… *sigh* I hate you, artificial light.

Aaaaand dump the sauce on top, at which point it looks pretty odd and not necessarily edible. And the sauce smelled REAL REAL REAL NO DANGER OF VAMPIRES HERE garlicky. 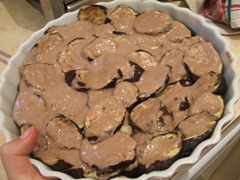 But as it started to bake (375 for 20 minutes), this kind of incredible aroma filled the house.

We always, when we order Chinese (about twice a year?) get eggplant with garlic sauce. OhmyGod it’s so good. And that’s what this smelled like! I mean the Chinese recipe I’m sure incorporates soy sauce and something sweet and the like; and this one has the walnuts, but seriously two separate and distinct cultures figured out that when eggplants and garlic get together, it’s a real good thing.

And roasting makes magic of 1. Garlic and 2. Nuts. So it’s just hard to go too wrong.

And the final product, sprinkled with fresh parsley, was positively gorgey. 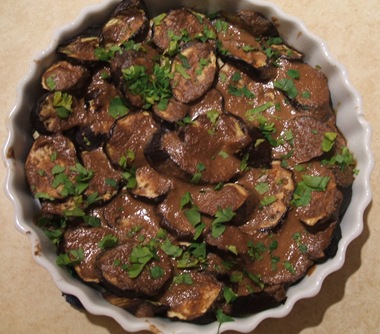 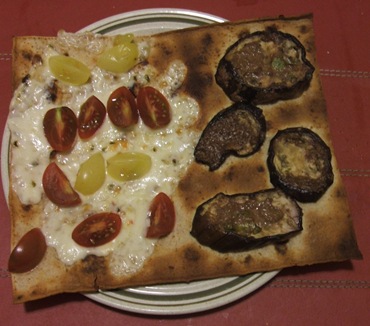 So we have my faux-flatout wrap, countertop-oven toasted. On the right we have the leftover eggplant. On the left we have a ripped up pepper-jack string cheese and chopped up farmer’s market cherry tomatoes.

SO GOOD! And such a wonderfully easy after-work dinner. Jacques Pepin, in Fast Food My Way, says quick lavash pizzas are one of his favorite dinners. I concur. 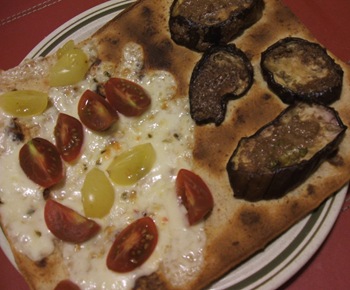 I love eggplant! I just read a good article in the Post food section about eggplant and methods to cook it so you don't need vats of oil. I'll have to try this dish!

MMM sounds good to me!

Eggplant's my favorite!! This looks incredible :) Thanks for the recipe!

mmm eggplant, love it! & i lurve your blog ;D

I love the Picasso Pizza. eat with your eyes first, right? :)

I need to find that cookbook! That recipe looks amazing. I love eggplant, but I can't make them myself because they always get soggy and icky. I need to try this recipe. :D

I am loving that artsy pizza. I am a huge sucker for beautiful food presentation!

mmm, i'm digging this recipe -- i love eggplant! definitely starred for the future :)

your food is so unique and pretty :D

love the melitzanas! I will have to try this recipe. Yum!

haha, your leftovers DO look like a piece of art :) picasso-ish!

Hi, our vegetable garden just give us the first eggplants (strange name, why "egg"?) and I really didn't know how to cook them in a different way than normal. And voilà, you have the answer! :) Uhm... no vampires because of the garlic? So I should tell to Edward Cullen not to come for a while... hehehe
a swiss bye bye

Mmm I've been looking for a good eggplant recipe- this should fit the bill nicely :)