After work on Saturday there was a large trash bag lurking in the corner of my kitchen. Why, you may ask? 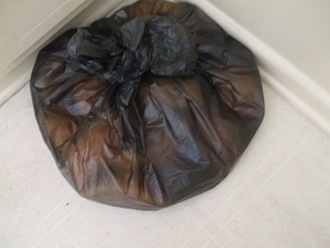 Pull it open to reveal… bread! 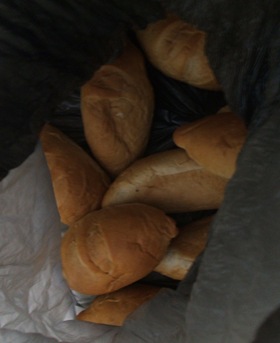 So on my first day of work at the bakery, I asked them what they did with leftover baked goods.

“Bread pudding!” was their reply. Awesome. It is also my favorite form of food recycling.

However. What they neglected to mention was that they put brioche, pan de yema, scones, and danishes in the bread pudding, but not actual bread. No, that gets thrown out.

Um, until I started working there! I basically shrieked in horror and asked them to let me take it.

So the bread above is the soft rolls. They were still perfectly good and soft, it’s just not bakery policy to serve them a second day. And some internet research led me to a food pantry that is located literally two blocks away from the bakery. Score!

I took the bread there Monday morning (still soft) and they gladly took it. Furthermore, I told my manager about it and she could not believe there was a food pantry so close to the bakery- so we will now be making regular donations! Wow I feel really good for having done that, and it goes to show you- sometimes all you have to do is a little bit of research to do a lot of good. A Google search for “food pantry Annandale” took all of two minutes!

So all that being said, they’ll be getting soft rolls, croissants, etc. However, on Saturday, the baguettes I saved… those were legit stale.

Soooooo some of them got ground up in the food processor to make homemade bread crumbs: 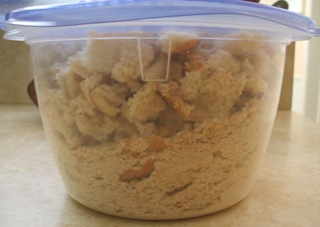 This was… a mixed bag. Some got pulverized, some are still in chunks. Do people have a good technique for making homemade breadcrumbs?

The rest, however, became something I’ve always loved and was recently reminded of in Anna’s beautiful posts about Italy: panzanella!

This made for a lovely peaceful Saturday night- I came home from 10 and a half hours of work to my sister and her boyfriend vegetating in our house, which she kind of trashed… so I calmly went for a walk, and when I came back they were going out! So I cleaned the house and made panzanella. It was kind of perfect, sadly enough.

So panzanella is Bread. Salad. Like, how can you go wrong? 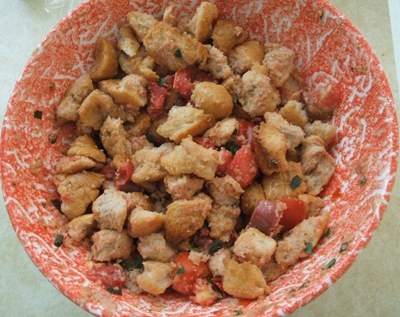 Here are the basic ingredients:

1. Bread: I broke my bread into small hunks (this was like two biggish hard rolls and 1/4 of a baguette? So maybe… 7 or 8 ounces?) and tossed it with olive oil and salt and pepper and let it toast in my toaster oven, tossing occasionally, until golden brown.

2. Veg: Tomatoes are the obvious choice. I chunked up two massive wonderfully weird looking heirloom guys. I have to say, though, that this recipe is probably conducive to creativity- I’ll bet roasted red peppers, for example, would be blissful.

3. Herbs: I used some basil, the obvious choice, but I also used a bunch of oregano just because it is completely invading our herb box on the deck and I want to give all the other guys a chance. Happily, it is delicious in this, and I recommend it.

4. Dressing: I used just a wee drizzle of olive oil and red wine vinegar. Remember that the bread is already tossed in oil, and that the tomatoes break down and release their acidic juices. Err on the side of dressing less, at least at first, cause you don’t want it mushy and wet. That being said, my mom tasted hers, went, “It’s good!”, and then drizzled on several tablespoons of olive oil. To each her own. My mom is the queen of monounsaturated fatty acids (I shared that story, right, how one morning she was like “Hm, what shall I take for lunch at work? Here’s an ENTIRE AVOCADO!” Which she then ate with a cup of soup. Oh Mom.

Finished panzanella (there’s this magic stuff—kind of like the crushed chips at the bottom of the bag that is little crumbs of bread and olive oil and tomato juice and herbs and WOW IT’S GOOD.) 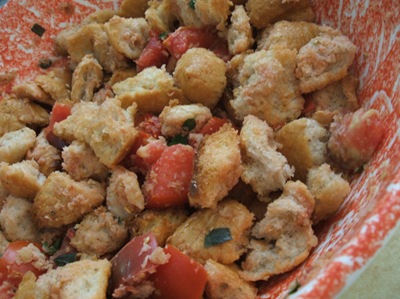 To accompany, in the protein department, I got out the rest of a frozen packet of ground beef (about 10 ounces, leftover from the almost meatless sloppy joes), and made me some meatballs!

To bind, eeeeeeeeshsocute, check out our green eggs! 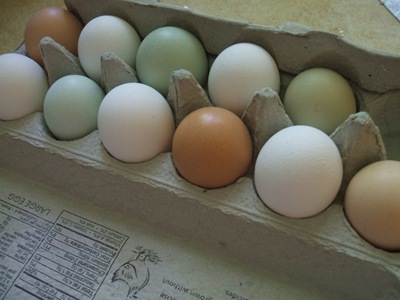 And to flavor and moisten, the last of some dried sundried tomatoes (I rehydrated them and chopped them up and also added some of the juice they made). 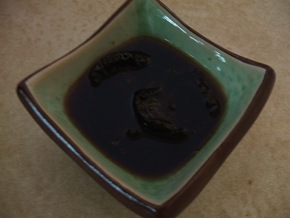 I also added some of the homemade breadcrumbs. More invading oregano. Salt, pepper, a minced clove of garlic, Worcestershire. Blended by hand, the way God intended. 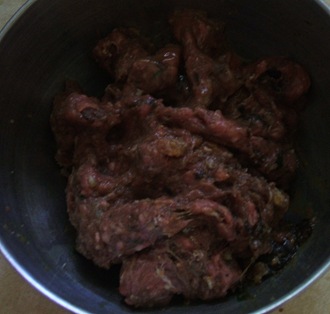 My Greek grandmother would’ve fried them in olive oil, but I’m broiled them, and I’m glad I did or I would have missed the wonderful delicacy of the texture. 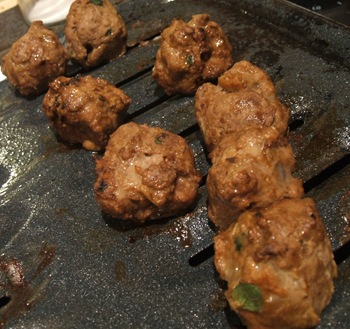 I really loved the almost meatless sloppy joes the other week but there were so many other flavors and textures going on in there that it was hard to evaluate the grass-feed beef on its own.

However, this was pretty pure and unadulterated, so I can wholeheartedly say that in addition to doing a favor to the environment and avoiding lethal e. coli, in buying grass fed beef (this was Trader Joe’s brand) I also gained extra deliciousness in my life!

The meat was wonderfully tender (the texture was like it had never been frozen) and very flavorful- it didn’t have some of the acridity I associate with ground beef at times. 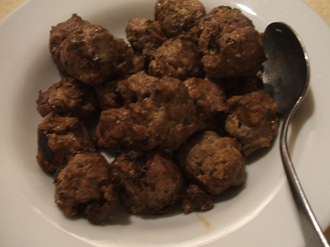 And yknow, I fancy that my additions made it yummy too. Sun dried tomatoes FTW. I can’t get enough of ‘em. With the panzanella, it was a wonderful Sunday dinner.

Going back to the bread, as y’all can see, I am pretty passionate about food waste. I think it’s disgusting that there are hungry people, all over the world and all over our own country, and that there are bakeries and restaurants and millions of establishments who throw perfectly good food away. And that includes individual people, too! Don’t buy a pound of deli meat if you eat one turkey sandwich a week. Don’t buy four bags of perishable vegetables unless you’re planning to make soup.

What do you do to prevent food waste? Have you taken any action in your own community?

OMG they were gonna throw out that bread! HEINOUS! i'm glad you stopped them.

usually i try to remake food into leftovers or bring it to share with my church.

In college, my friends and I would sometimes dumpster Panera bread. We found great bounties of bagels, pastries and throw-aways! Good on you for putting the scraps to good use!
And oh, those eggs! So cartoony and purdy. You must serve the green ones with ham.

How have I never had bread salad?! Yum!! And I love that you "recycle" the food!!

The restaurant where I work throws away muffins every.day. We bake them fresh daily, so at the end of the day, they just toss that day's muffins. Employees can take them home, but I've only done so a couple of times for the fam. I think that a lot of restaurants have a hard time donating food to shelters because there's a fear that they might get sick of something. Because clearly a starving homeless person is afraid of getting sick from muffins that people paid for all day and ate a restaurant. I'm going to double check that that's the case at my restaurant, because if there's a remote possibility that we can donate the muffins I think that would be fantastique.

Panzanella is delicious! My madre used to make that. Great way to use summer's tomato bounty.

Hi, my mom does two recipes when she has old bread!
the first one is for the very very old bread: a bread-cake with cacao, raisins, pine kernel, almonds, candyfruits (beark), etc. that taste divine!
the second is a salad like your panzanella, but a bit different: we also put some chopped black and green olives, onions and garlic and some persil too. ;)
ciao ciao Lalla

Go you for being so very thoughtful and conscientious! The food waste in this country is crazy! And totally unnecessary. I only buy what I need for the week and I NEVER throw things out or let things go to waste. I would just hate wasting the money!

The panzanella looks totally droolworthy. Love your spruced up meatballs!

Scones in the bread pudding? Darn it, I threw half a batch of stale ones out just last night...

NICE JOB on the make-your-own donation route/plan! Very cool of you!! THat bread looks good to - crazy town!

Gazpacho is always good to make when you have stale bread...

I never thought about using up stale bread this way. It usually ends up being thrown out or being made into bread crumbs. I'll have to try it out!
thanks for stopping by and commenting! Love finding new food-blogs.

I hate wasting food, I always try to use everthing I can.
That's a really nice thing you did!
Oh and panzanella actually sounds delicious!

Good for you for finding a local food bank! You've done your good deed for the year and more!

That's wonderful! I worked in a bagel shop and they got rid of a lot of bagels. Wish I was still there so I could implement your Food Pantry idea! I'm big on not wasting food, too.... most of what I buy is either: long-lasting grains or vegetables that I eat within the week.
Those green eggs are so cute. When my brother was a little kid, he refused to eat scrambled eggs in their normal yellow color. I wonder if he'd have liked green eggshells?

So smart!! I love reject bread haha. Like when bakeries sell day-old products for $0.50! Can't get any better than that :)

I always find it so ridiculous that restaurants throw out perfectly good food! Kudos on finding out about that food pantry and donating the bread! :)