I was reading the latest issue of Cooking Light, which did a feature on San Francisco and its surrounding environs. They talked about how it’s sort of the epicenter of the local/organic food movement. And one chef who was interviewed and said “I find that now I look at what my fresh produce is and plan my meal around that, and only think of the protein on the plate as a last step.”

And I thought, well, duh. Plants are the star of the plate!

Tonight involved my FAVORITE plant, the ONE PLANT TO RULE THEM ALL, the artichoke: 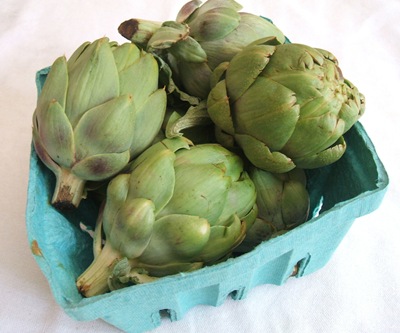 Definitely did not know you could grow artichokes in Virginia. Based on the shrieks of joy around me at the farmer’s market, neither did a lot of other people. These are babies (hard to tell in this picture) and the farmer women assured us that there would be fully grown ‘uns later in the summer. So stoked!

I am more familiar with grown-up artichokes, which are pretty idiot-proof (steam ‘em, peel off the leaves, dip them in something delicious, and eat the heart). I decided to research some potential recipes for the baby ones, and I saw risotto, and that was it. So I made this recipe for artichoke and parmesan risotto, except I subbed barley for arborio rice. This was the first time I made that direct substitution (all the barley risotto I make is based on the proportions in this one epicurious recipe, although I’ve tweaked seasonings etc. over the years) and it worked beautifully.

What’s not to like? Barley is a whole grain, and it’s cheaper and easier to obtain than arborio.

My artichokes were larger, I think, than those specified in the recipe (they were more like teenager artichokes than baby artichokes!), so I used six instead of eight and quartered them instead of halved them, and then let them soak in some water with lemon juice to get them 100% clean and prevent discoloration.

With artichokes (particularly the small ones where you eat the leaves, too), the first thing is to get them into a state where eating one will NOT cause internal bleeding. Trimming is a must!

Before, coming out of the lemon-water bath: 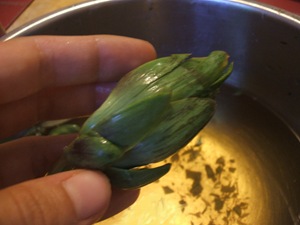 And after, about to go into the risotto pot: 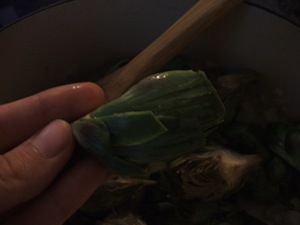 I love risotto. I love having an excuse to use my mama’s Le Creuset pot. I love stirring. I love watching the grains magically thicken as they absorb the broth (and, as ever when making risotto, I used homemade chicken stock, which makes it scads more delicious).

The final product looked hearty and rustic and beautiful, and smelled like heaven. 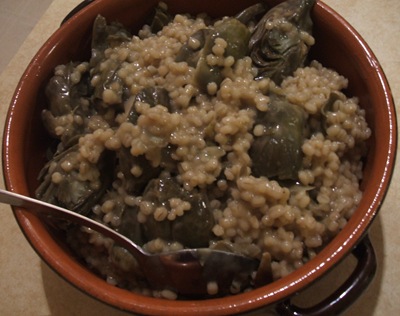 Ahhhhh and the taste. They aptly describe in the header to the recipe that this is extra delicious because you cook the vegetable in the risotto, rather than making it on the side and adding it in at the end. That means that every single morsel of grain is positively imbued with the heavenly flavor of artichoke, something difficult to describe but that I sincerely hope all my readers have gotten to experience.

Are other people as obsessed with artichokes as I am?

As for the eating, quite honestly it got a bit messy because since, like I said, these were larger than your typical baby artichokes, the inner leaves were nice and soft and could be eaten whole but the outer ones were a bit coarse. Ultimately we figured out you could eat the outer ones like a grown up artichoke (peel them off and scrape the ends with your teeth) and the inner ones and the hearts whole. It worked. I can’t complain. 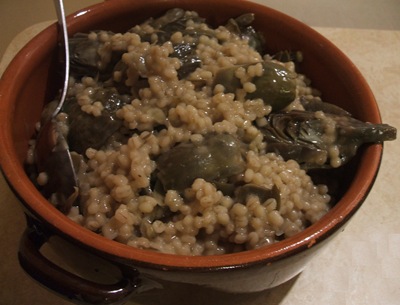 I know it sounds insane but I seriously feel like I have not been getting enough vegetables lately. So to round out the meal, I grabbed these two cuties: 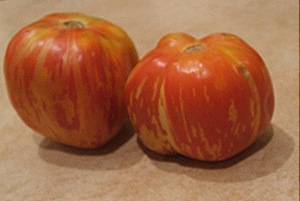 I get such enjoyment out of seeing the bizarre varieties of heirloom tomatoes that are available! No clue what these were called but they were cute and tasty.

As usual with olive oil, balsamic, salt and pepper, and herbs from the deck (today was a basil-oregano blend). 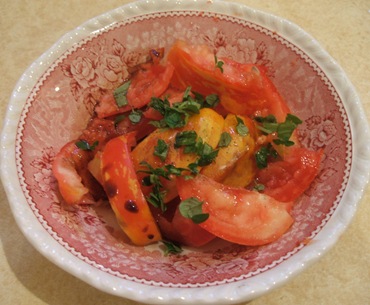 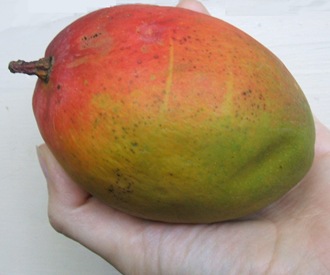 Alas, this is not local. I would love to live somewhere mangos grow; I flippin’ hate the cold (true story: when my parents lived in Miami, their neighbor with a mango tree would give them bushels and bushels of mangos because she thought they tasted like “peaches soaked in kerosene”. Can you imagine?!)

So we had a mango. And then I thought of a recipe I lusted over in Eating Well a few months back- Indian Mango Dal. It paired mango and… lentils?!

I mean, you guys know me and lentils. We’re tight. It’s intense. So I thought, hey, they published it, they must know what they’re talking about.

You put on your lentils to stew and then you make yourself a nice spicy bunch of goodness on the side! (Based on my scads of Indian cookbooks, this seems to be the authentic methodology for a dal). 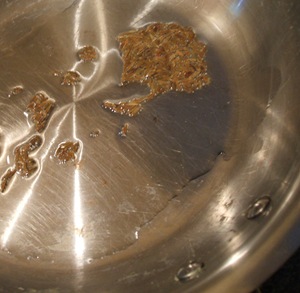 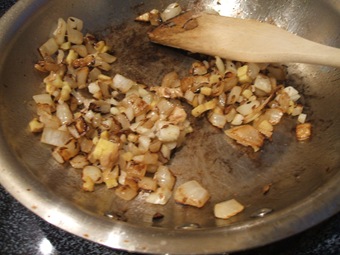 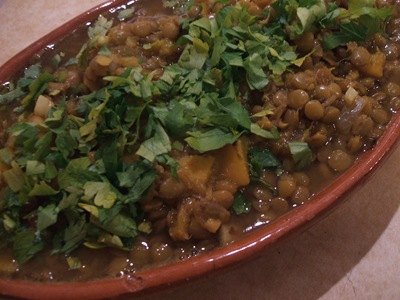 Anyway, it was absolutely wonderful. The sweetness and freshness of the mango was lovely with the wholesome proteinness of the lentils. And mama loves her some ginger and cumin.

Rounded out with rice for soppage. Lovely. 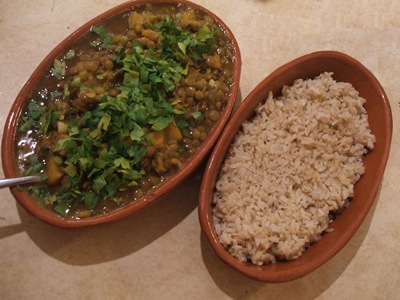 If y’all get a chance, you can vote (up to once a day!) for my Why Cook Well essay! Vote for me!

You seriously make the best food ever! That mango dahl looks fabulous. And I had some artichokes on my salad today! Yummy :)

I've never gotten seriously into artichoke, but I may have to try that mango dal recipe! Hmm, I have ground cumin but have never used cumin seeds. Will have to seek them out.

I love artichokes when someone else makes something with them, but I've never been courageous to handle the raw ones myself. Some day, perhaps, after I have conquered my fear of shrimp....

I decided to comment again to answer your burning carrot cake questions since I couldn't reply to the comment! They are in the tins because they are sort of messy, but I put them in the fridge and now I can just scoop them out kinda. I think I'm taking one to work today and putting it in some Saran wrap! They are yummayy :)

I loooooooooooove artichokes but have never cooked them well myself. i love you describing the screams of delight from other people at the market...i can see it.

oh of course id vote for you!!!

its been so long since ive had artichokes! i did try cooking them myself once which was an epic fail. theyre so yummy tho!! <3

i saw some artichoke plants at the farm yesterday, they look really strange and not at all what you would expect hehe. i had once pictured them growing on a long stalk like brussel sprouts for some reason. but they just poke out of a shrubby looking plant. it would be cool to grow some.
your food looks so good!

I don't know if I like artichokes or not, seriously. I think I need to try them!

Oooh, that dal looks delish! And, I went ahead and voted for you. :D

Everything looks great. I am impressed. I love artichokes, but I have never made one at home like that. i should try.

Yes, produce should definitely be the star of the show!

I do love artichokes, I'm a little jealous of your le creuset pot. I may just need to invest in one when I get my own place. And by may I mean definitely.

I'm going to be at my grandparents' house again this weekend, like Friday and Saturday if you aren't working!

Gasp! What great dishes you whipped up. I am so trying that mango dal!