To say that I “made” my lunch today is really giving me a lot more credit than I’m due. “Assembled”? “Threw together?” 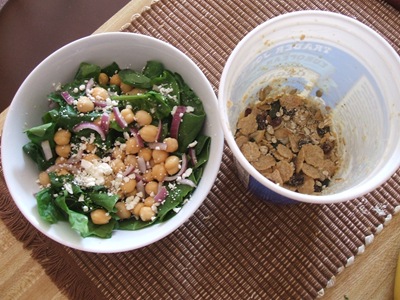 Part 1 was my free Bare Naked granola sample, which featured oat bran; raisins; dried cranberries; flakes; pepitas and various other goodies. I threw it in the box with the last of the TJ’s Euro. I also added a splash of milk, as it was a little dry. 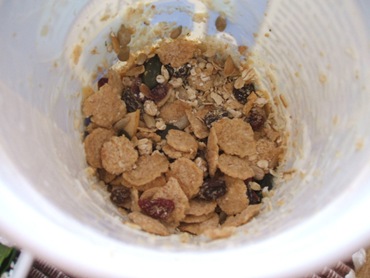 The other component was a yummy, colorful salad: 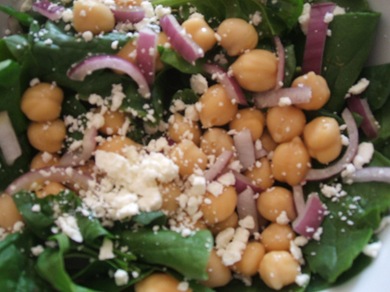 Spinach, chickpeas, red onion, oil and vinegar, and a sprinkling of feta on top.

My current conundrum is this: I don’t eat that much during the day, cause I’m just not that hungry, and then at night I eat a lot cause I know I haven’t eaten enough during the day and I get hungry.

Today, I’m trying to trick myself into thinking I’m not eating too much by eating calorie-dense foods like granola. A good idea in theory, but now I’m kind of uncomfortably full after that lunch.

Another way I’m trying to get the late night eating under control: 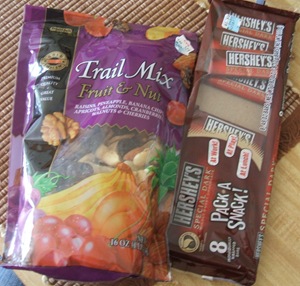 I think it’ll be good for me to have proper “snacks”, like a big bag of something to nibble on, rather than making the commitment to an entire bar or yogurt container or something. This is weird, but I seem to work better with taking a nibble from a big bag. I realize some people can’t handle this. However, it’s the way I function, and recently has resulted from little nibbles from containers, like my peanut butter jar and cereal box. This is lame.

Also, sweets! They are not bad. These bars are portion-controlled, reasonably healthful (dark chocolate with a short ingredient list), and will hopefully satisfy craveyness.

Oh I totally buy those dark chocolate bars all the time! I need portion control around chocolate haha :/

Mmmm, your lunch looks gorgeous! Such a healthful balance of veggies, protein, fiber, and deliciousness! :-)

Great idea with the snacks! I'm the same way with little nibbles - I always keep a big bag of dried plums in the house, and I'm usually content with just one or two when I'm craving a little something after dinner... There's something just so nice and cozy about a big bag sitting atop the fridge! :-)