I had three basic objectives for lunch:

1. Devour use up some leftovers from yesterday’s fun event (more on that later!)

2. Use up some eggplant I’ve had for awhile

3. Refuel following a surprisingly productive workout (arc trainer, which IMO is more hardcore than elliptical, followed by ABS! It is cause for celebration when I actually fee like doing situps, let me tell you)

Here’s the somewhat random but delicious amalgamation I came up with: 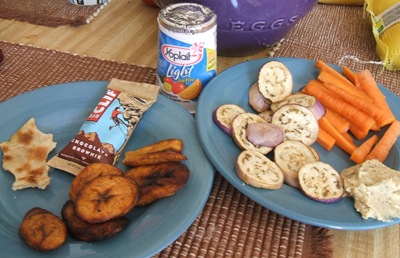 First for veg and protein: 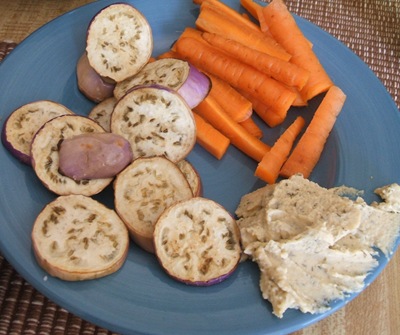 Two smallish carrots, cut into sticks, the eggplant, which I quickly salted and then broiled with cooking spray, and my hummus of the moment, Cedar’s astonishingly delicious dill hummus. Like, never would’ve thought to pair dill and hummus, but I’m a believer! 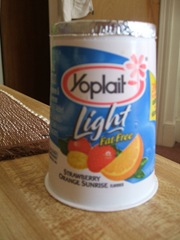 Cause I’m a lady and I’ve gotta build those bones! 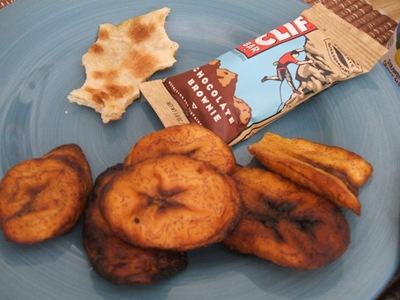 So yesterday my friends and I hit up the Cambridge Carnival, which was billed as an international street fair. As we made our way towards Kendall Square, we realized this might be a little wilder than we might’ve initially expected, as evidenced by the increasing number of people wearing tassed bikinis and feathers. Suffice it to say, this was more like a Caribbean Mardi Gras celebration than the stodgy face painting and crafts we were expecting.

It was SO FUN! Since I had homemade beef stroganoff (! seriously roommate comfort food dinners win!) I couldn’t go as nuts as my friend, but I could could could not resist getting some PLANTAINS. Seriously, they might be my favorite food.

So lunch today incorporated the rest of plantains, a leftover slice of my friend’s naan that she gave me (it used to be, uh, bigger, but I got a naan urge late last night, and naan urges are mighty hard to fight off).

I also had a free mini Clif bar I got for free  at the gym to get smore protein in me. That was supposed to be “dessert”, and eaten last, but then I had a bite of plantains and they were SWEETER THAN THE BROWNIE BAR! So I ate the brownie and then the heavenly heavenly fried but so worth it plantains were my dessert :D

On the note of free stuff: 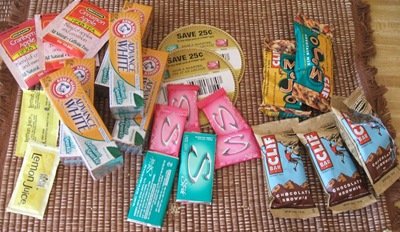 Teabags and lemon juice from the school store; sample-sized toothpaste from CVS (actually, they weren’t *free*, they were one cent each as part of some promotion. I got one cause I happened to be there buying a notebook, and then the guy at the counter was all “I mean, they’re only one cent and you can get as many as you want” so I did!); 4 pieces and two packs of gum, as well as coupons, that they were giving out in the street; and I ended up actually getting FIVE of the free mini Clif bars at the gym :D It’s a regular thing now, but who knows how long it’ll last? I uh, also have like 4 more already in my cupboard.

Ok, so I lived in boston for 1.5 years before moving back to NYC and I felt like nothing ever happened there. And, now, I read about cool stuff happening in the area all the time!