I realized yesterday was actually the first day I hadn’t posted in awhile! We’ve had this weird big bright warm thing in the sky (I think people not from the DC area have mentioned it… the “sun”? I think is the word?) and I was out doing nice things. But back home for Sunday dinner!

Sunday dinner is such a nice tradition. A big, well-rounded platter of yummy, comforting food. What the traditional sort might call a “square meal”, except, as might not be the case in some gut-busting traditional meals, this one was ludicrously healthful too! Nice to get the week started with a nice nourishing meal.

It was also rawther gorgeous: 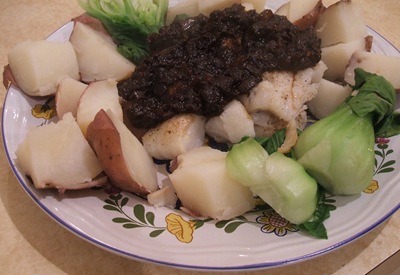 I’ve been doing this crazy thing lately where I actually follow recipes from cookbooks.

A bit of back story: when I was a wee ‘un, my dad used to be food editor of our hometown paper (Spokane, Washington, represent!). It meant fun trips out to eat, him making recipes (although that column, “The Reluctant Chef”, mostly entailed recipes that involved onion soup mix), and most of all AN ABUNDANCE OF COOKBOOKS. Even after the divorce, my mom’s house still has a tonnnnn! Heh. Tonight’s inspiration: 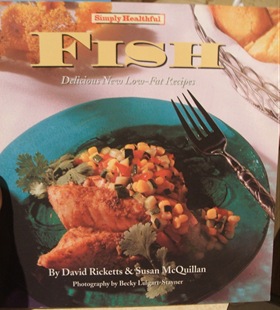 Cod with sun dried tomato sauce. It being copyrighted and all, I can’t give you the exact deets, but basically you rehydrate some sundried tomatoes (dry packed, not in oil), then make a sauce with sauteed onions and garlic, canned whole tomatoes, and a splash of balsamic at the end.

The sauce was INSANELY DELICIOUS! And went really nicely with the firm, assertive cod. 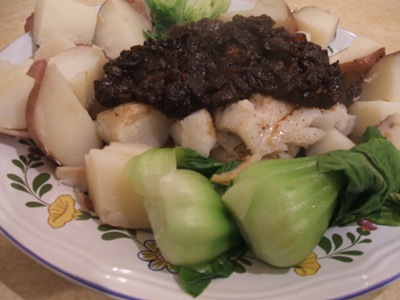 With baked red potatoes (which I ended up also dousing in the sauce, mm!) and steamed bok choy. Lately I’ve been trying to use cooking methods that maximize nutrients in food (aka not boiling vegetables!). I made the potatoes by wrapping them in foil and baking them at 350 (in my handy dandy countertop oven!) for like 45 mins? Still soft and tender, no vitamins lost to the boiling water! 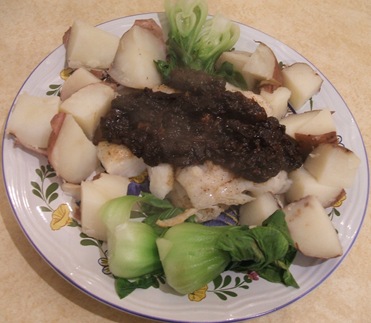 Something new that I love: 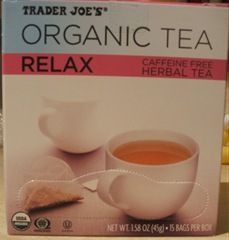 A new find. Usually “relaxation” teas contain chamomile, which I think tastes like grass clippings. But this one is mostly fennel (with spicy hints of ginger etc.) and is way delish. Highly recommend!

I feel the same way about chamomile...I'll definitely be trying that tea!

I never follow recipes from books haha I somehow always end up tweaking it. :)

So cool that your dad was a food writer...I see where yo got it from!

I never follow recipes EXACTLY. I always have to change something but I like using them as jumping off points.

Trader Joes has the yummiest tea. I like the RENEW one.

tea is THE best. EVERR.

Hope you are able to have a mindful Monday! (Yes, I'm loving alliterations)
bec xo