lele and the chocolate factory

Willy Wonka does not exist. Really, that’s a relief. He is creepy. 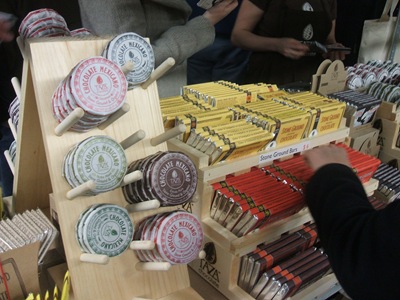 Massachusetts residents may recognize those bars (if you have bought chocolate at Espresso Royale, for example). Taza is a super-awesome, fair trade, locally built-from-the-ground-up business. And they have a REAL LIFE CHOCOLATE FACTORY that opened up for tours on Saturday (I found out via Yelp, yay them!).

They had a store area set up (the top picture) as well as a tour into the chocolate making area, and then the line for samples.

So the sample line was killer long. I mean, OBVIOUSLY. So we decided to start up with the tour. But first fortified ourselves with (LUSCIOUS!) hot chocolate, served by these guys: 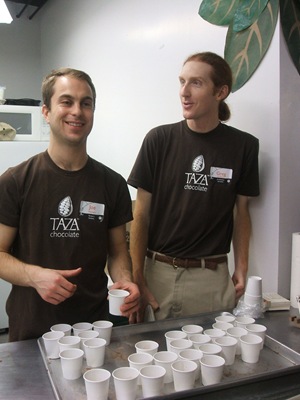 I think if I worked in a chocolate factory, I’d probably always be in a good mood. Um p.s. the entire place smelled like chocolate. I mean, you probably figured. But I figured I’d tell you :D 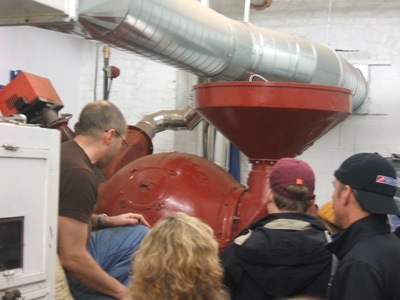 When the company first started, they didn’t have their own roasting equipment and had to go to J.P. Licks and use their coffee roaster! But they picked up this GIANT RED MACHINE at a going-out-of-business sale at a chocolate factory in the Dominican Republic. Let’s just think about the awesomeness of that phrase for a minute. 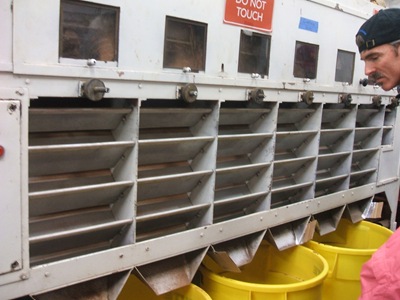 Crunch off the shells, shoot the nibs out of chutes. They look like this: 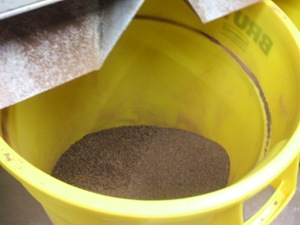 Then the first grind, done with something that looks like this: 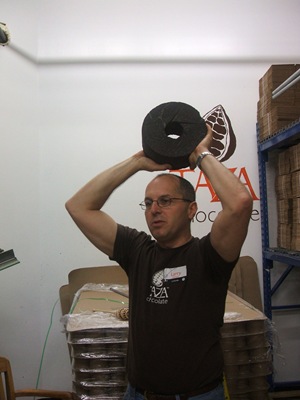 It’s quite similar to the traditional implements used.

Then some of the chocolates are done, and they just add sugar (the Mexican style chocolate). The bars get refined one more time, through this smooshy thing (I believe that’s the technical term): 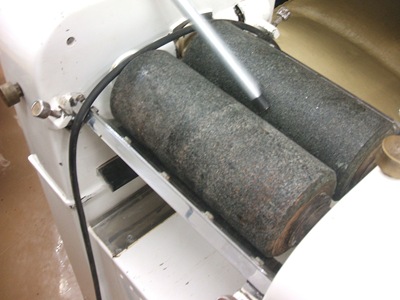 We didnt get to see the shaping and packaging area, so that was the end of the tour. It was way cool! Then, to brave the sample line.

They very nicely kept us fortified as we waited- employees wandered through the line with little bowls: 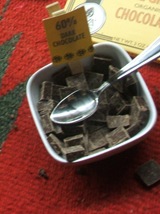 And then, eons later, we got to the good stuff!

Most of their chocolate is from the Dominican Republic, where apparently the chocolate has fruity overtones (which I definitely got once they told us that- it was almost winey!). That second bar from the left is their holiday bar, and they have a limited supply- when it’s gone, it’s gone. That chocolate is from Chiapas, in Mexico, and is uber fancy. 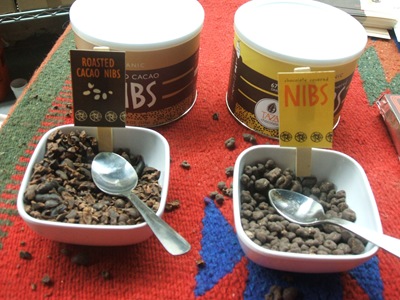 Whoa, have you ever had cacao nibs?! I had not! They taste CRAZY! I would fail at describing them… campfirey. That’s the closest I can come.

And finally, my fave, the Mexican chocolate: 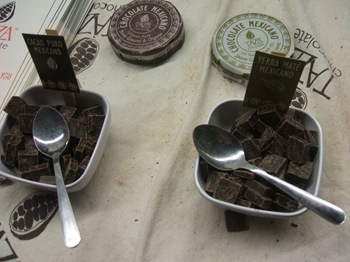 It has a coarse grind on it and is awesomely chewy and rich and dense. The yerba mate flavor was aaaaaaaawesome. Also not pictured is one with guajillo chiles, which was also GREAT.

But my favorite was definitely, DEFINITELY: 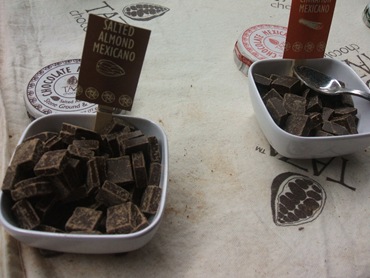 Oh my God. The salted almond. Sooooooooo rich and gritty and intense. There are no words. And, um, hello, antioxidants like you wouldn’t believe. HEALTH FOOD!

So basically one of the better days of my life.

Left the camera at the boy’s following a DELISH dinner (I’ll post that at some point…), but, yknow, I’ll get it back someday. Hope everyone’s gearing up for a good week. Eat some chocolate!

That's so cool! I'm going to need to look up that place and take a trip

Haha, if I worked in a chocolate factory, I would be in trouble!! ;)

I am sooo jealoussss! I want to go to one tooo!!!

oh my goodness, this looks like heaven! i am a hot chocolate fiend, and these pictures are making me want some pronto! :-P

OH MAN! That chocolate looks SO GOOD! When my family was living in England we went to the Cadbury factory a couple of times. It's like visiting heaven.

Thanks for visiting my blog! I am so jealous of your visit. The place looks like a chocolate lovers heaven. I am absolutely going to take a trip there the next time I am in Mass.

Oh wow! All that chocolate looks yummy.
I think it is really cool to be able to go on tours that show how products are made. Especially tasty prodcuts!

That looks like so much fun! I'd be in big, big trouble if I worked at a chocolate factory!

I would love to go to Willy Wonka's Chocolate factory, especially if Johnny Depp is playing Willy Wonka.

Yummy! I've not heard about the Taza brand of chocolates. Any relation to the tea company?

fyi - I'm hosting my first giveaway. Thought you'd be interested in some of the kitchen gadget prize packs.

"I think if I worked in a chocolate factory, I’d probably always be in a good mood." That's an under-statement, at leastfor me :o) !!

Oh, WOW, I would have loved this tour. There's one you can go to in Giradelli square I need to look up.

Where is this place? I so need to take a trip and go there! My husband loves the nibs.

The salted almond would have been my favourite too...there is just something about sweet and salty that appeals to me.

Yum. I LOVE chocolate. I could eat it every day. I'll have to see about taking my own trip there...

Wow. I have now made it my life mission to visit a chocolate factory before I die. Or within the next year. That would be preferable.