the blogs I read

I read many many blogs and I have a weird schedule about it.

Some of them I read in Google Reader- but I’m perpetually 3-6 days behind. It’s a little bit deliberate, though- it’s like I’m saving the immediately preceding few days for myself in case I have a boredom emergency and need to read blogs for a long time.

Some of them I prefer just pulling up the site and reading several posts at once, in a little bit of a narrative.

Sometimes I read blogs written by new mothers and pregnant women all at once. I DO NOT WANT TO HAVE A BABY. But I’m having this biological phase right now where I’m completely enthralled by the whole process. BUT DO NOT WANT ONE AT ALL. THIS ISN’T ONE OF THOSE JOKING SARCASTIC THINGS. No offense. It just seems sort of terrible.

And then some blogs, the ones written by my friends, I immediately read each new post as soon as that friend posts it on Facebook. Such is the case with Grace, my former coworker. You may have seen her on Chopped (!) Or read about her in the Wall Street Journal (!!!) She’s getting super famous and I’m sure eventually it’ll be “I used to know Grace…”

In the meantime I read her blog, Goose Eats DC. And make her mac and cheese.

Secret: put goat cheese over the pasta and cheese sauce but under the bread crumbs. 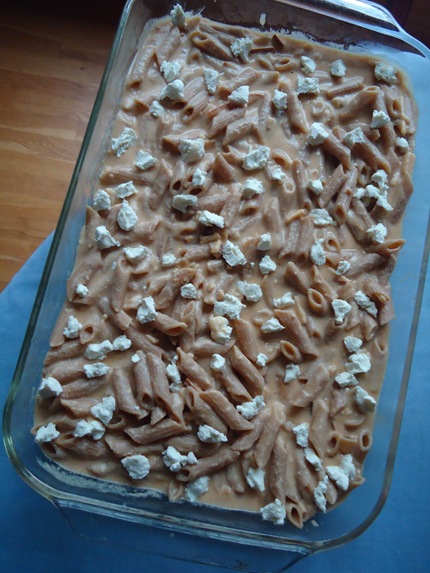 The buttery, awesome breadcrumbs. This recipe uses essentially a stick of butter. I made this and immediately froze two thirds of it. For our arteries. 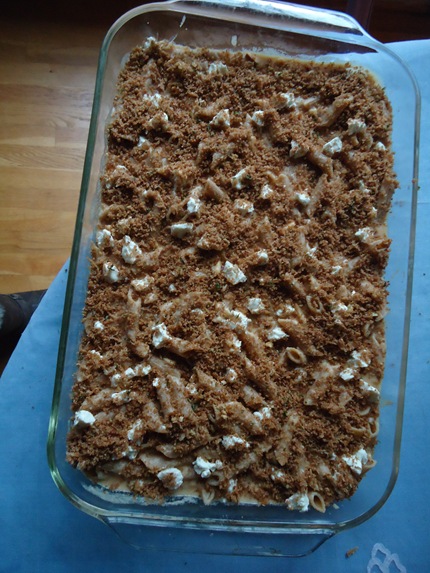 I am a long time reader of Carrots n Cake. I think her pug is annoying but her husband is hot. When she posted pizza with a sweet potato crust, I went OH YEAH. So I used sort of an amalgamation of Tina's paleo-esque sweet potato crust and another one I found that was a more traditional crust.

Basically, an ENORMOUS roasted sweet potato, 2 eggs, an egg white, 2 cups of whole wheat flour, and my seasonings of choice.

Pre-baked it for 25 minutes. 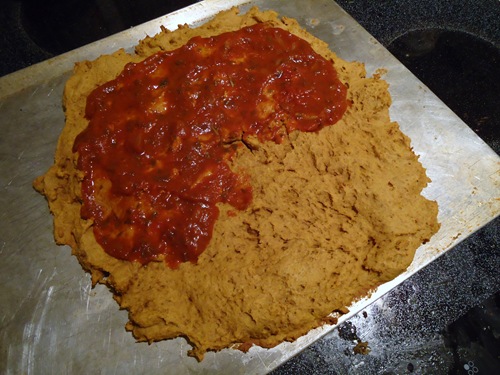 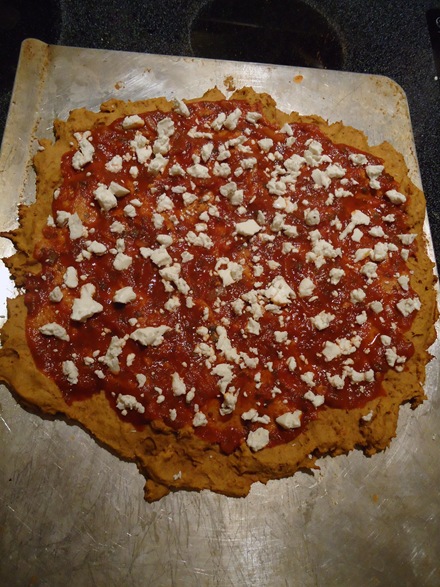 And topped with mushrooms 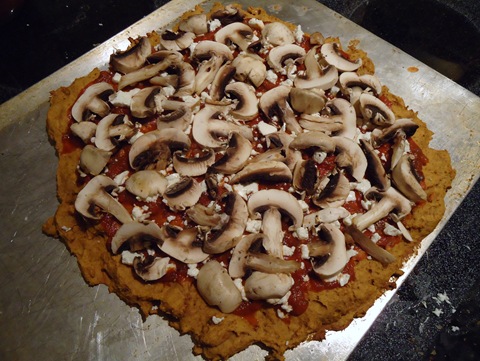 The crust was SHOCKINGLY good! Pleasantly chewy, subtly sweet. Everyone agreed it’d be particularly good with caramelized onions on top. And/or bacon. 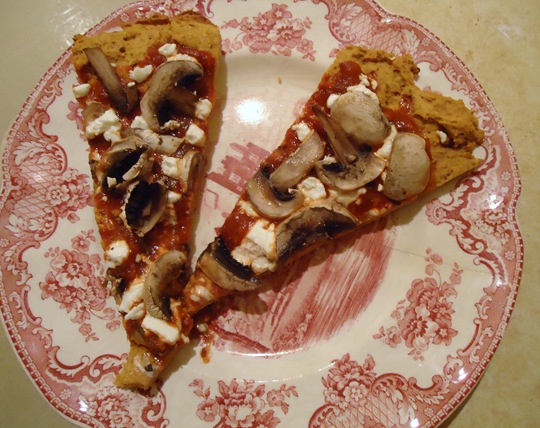 I’ve only recently begun reading Smitten Kitchen. I knew her recipes were great, and lately there’ve been a lot published, in honor of her cookbook, which is fabulous. Anyway, in the past I preferred food blogs with a touch of voyeurism- is that bad to admit? I kind of love the people who overshare about their lives?

As she said, the peeling of the chickpeas is not a deal-breaker with the amount of time it takes. I read the paper and did it.

The ensuing texture is indeed good.

The flavor is… not ground breaking. I ate it, and enjoyed it, but might try the technique with a different recipe. Keep fiddling. 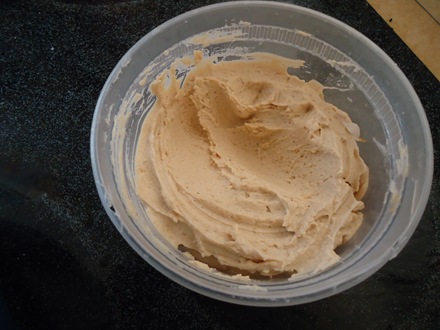 At the same time I made that hummus, I was making this: 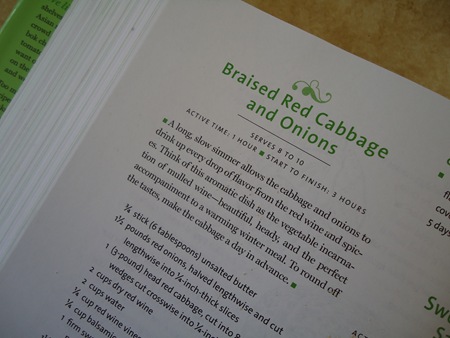 Since it’s from Gourmet, it has scads of butter (well I 1/3’d’d the recipe, so it had a third of scads of butter). I compromised by half and halfing it with canola oil. Still buttery flavor. Less saturated fat. I had, after all, recently made Grace’s mac and cheese :) 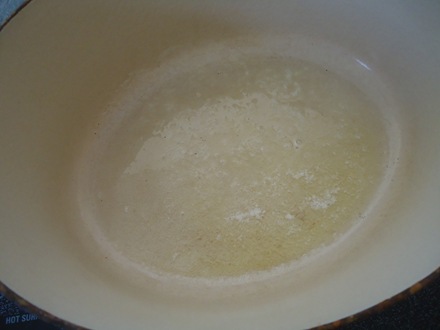 It was goo-ood! I made it mainly because we had so much cabbage and wine in our house (classic situation, right? Right?) 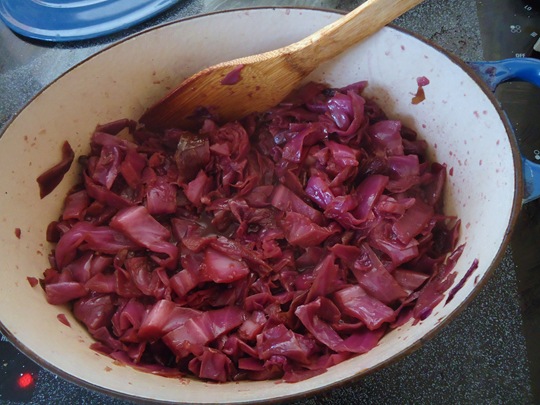 I smeared hummus on a whole wheat tortilla and stuck it in the toaster oven. It is not terribly attractive. But this was good. 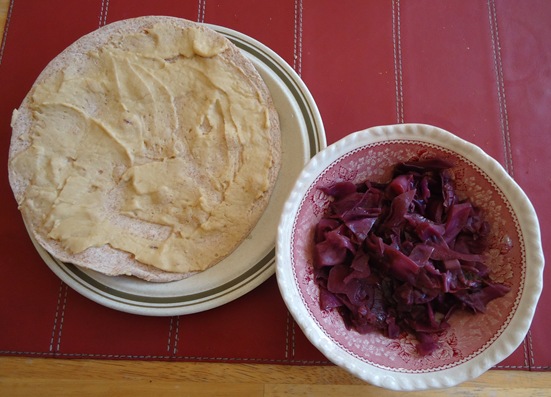 Any blogs I am in desperate need of checking out?