This is a think-y, talk-y post. Read as you wish.

And central to that, at least for me, is thinking about how to eat. How one can eat, how one should eat. How eating a certain way- or a lot of ways- can maximize health, mental well-being, and so on. I only speak for myself, and I recognize in a world of scarcity that it is somewhat absurd, even shameful, to have these kinds of philosophical looks at food. But that’s where I find myself, and I’m trying to get some personal perspective/learning out of it.

SO. An idea that was introduced to me earlier this week was the idea of eating for pleasure. I was on a semi-guilt trip of the (fun!) night of my boyfriend’s birthday where he had a throwback party complete with beer pong and I ate a silly quantity of chips with guacamole and dessert. I had gone into this party having already gone out for a (delicious! satisfying! filling!) Indonesian meal at a restaurant with the birthday boy. I knew I did not “need” to eat. So I made a mental proclamation that it was totally ridiculous and unacceptable to eat anything else that night. So then I did. And then I felt guilty. And then I felt, what the hey, might as well just keep going since you have already disappointed yourself.

Maybe you relate to that feeling a little, or a lot, or not at all. It’s a common thing with me, disappointment with myself over really trivial things, and it’s something on which I’m actively working.

Anyway, so this eating for pleasure idea. What if, when we find ourselves in these situations where no, our bodies do not need to be fueled to have adequate nourishment for the day but nonetheless food is appealing to us, we eat. We make a conscious decision to say, “I love guacamole! I would experience some enjoyment tasting the pleasant flavor and texture of that guacamole.” Sure, if I had gone into that party totally stuffed, I probably wouldn’t have benefited from eating more- my stomach would have felt uncomfortable. But I went in feeling- okay. Sure, could have been satisfied with the dinner I had already eaten, but there was food around that appealed to me, and I probably could have enjoyed its flavors, in moderation, had I not set myself up with rigid expectations of what healthy eating is.

There are all kinds of ways to fight little wars with yourself, and that was one for me. I’m trying to let up.

So, a few days later, after the eating for pleasure chat had digested in my head for a bit, I bought myself an apple tart. 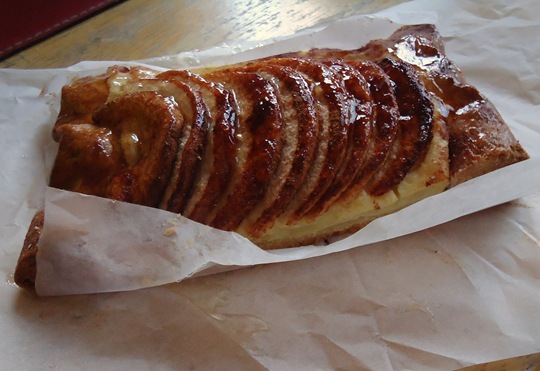 Longtime readers (or people who actually know me, of which there are several who read this :D) will remember I worked at a bakery a few summers ago. I enjoyed it, though being the perfectionist I am got a little neurotic about customer service (my friend Dan, who’s a server at a restaurant, relates PERFECTLY with me about this). Anyway, I didn’t eat NEARLY enough of the wares as I should have, given the opportunity (my boss said I should know the merchandise and could try whatever). I was, I suspect, very caught up in the rules for myself I’d made in my head.

But the most popular item, one customers went gaga for and we often ran out of, was this apple tart.

So, I bought one for myself.

The bakery is walking distance from my house. I walked there and home. When I arrived home I’d call myself medium-hungry. I looked at the tart and it was GORGEOUS. And I think my initial instinct was to go, “Eat half! That is huge!” In womens’ magazines, there a lot of (maybe) well-intentioned articles about portion control. One thing I’m learning more and more is that it’s okay for things to be beneficial to some people without actually being beneficial to me. If you are trying to teach yourself portion control and splitting something in half immediately is what feels right to you, rock on. Me, I’m trying to make less rules and assumptions.

So I started eating and damn it’s good. 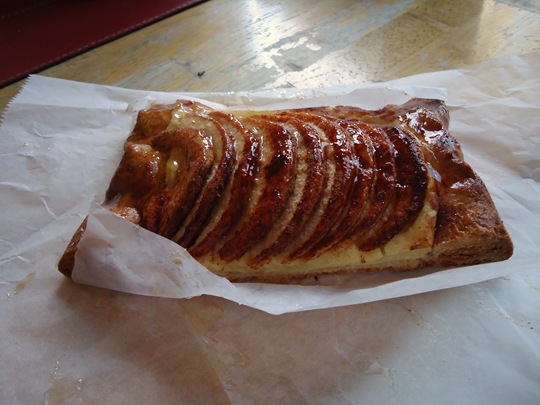 I paid attention to what I was eating. I ate more than half, but not a lot more. It was pleasure eating and it was nourishment at the same time. That’s rad, guys! I’m aiming for more of this. 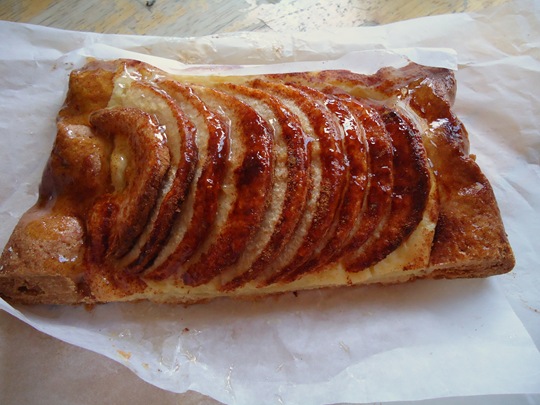 And when you set a tone in one area of your life, it can set positive tones in the other ones. I took another walk (it was a beautiful day, the first in a string that is ENDING based on the horrific forecast for our area).

And in the spirit of slowing down and not making rules and doing things for pleasure, I said this would be a leisurely, picture-taking, don’t-have-to-finish-the-whole-loop-if-you-don’t-want-to walk. 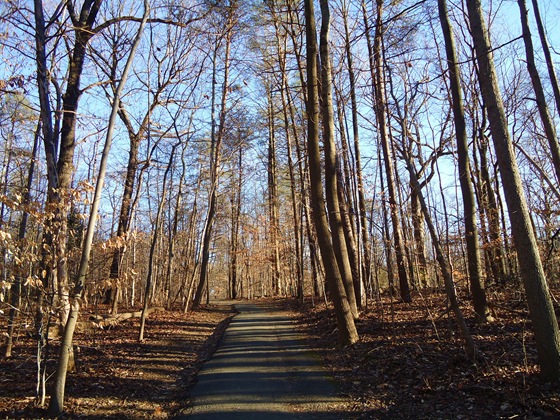 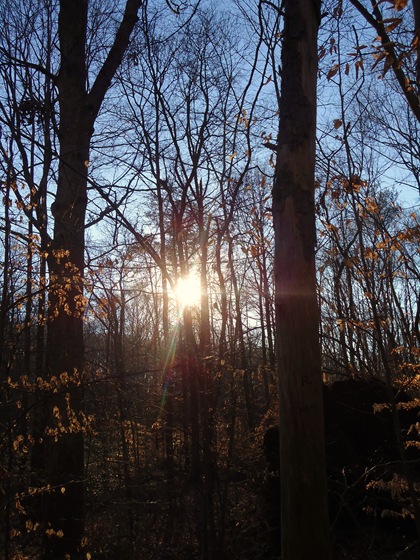 I was really just focusing on the light and the leaves on the ground when I took this picture and I didn’t even notice that amazing tree with the flowers on it dead center. Go figure. 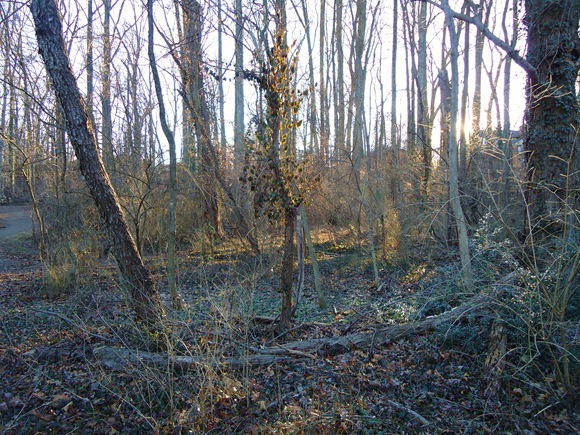 Spot the deer? There was this whole gang of them. And then one of them, I imagine some sort of alpha matriarch type figure started staring at me and stomping her front foot. It was disconcerting, yet awesome. 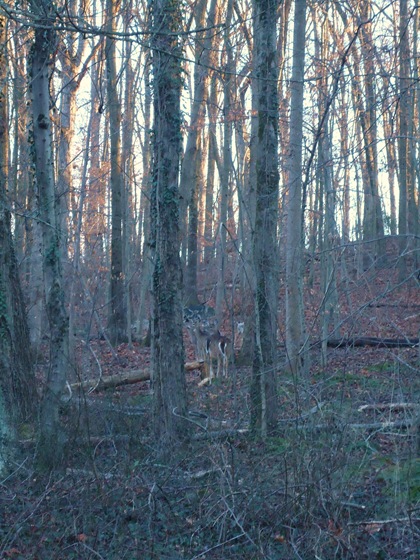 Another thing I do for pleasure, and always have, is read. I am super in love with biographies at the moment and I think part of it is just being genuinely curious about inhabiting another person’s head. Their thought patterns and so on. What do other people spend all their time thinking about? Are they as bored as often as I am?

So most recently I have read Keith Richards’ memoir, Life. It is as ridiculous as you would expect, but also… awesome. Really well written, and just puts you in this mindset where you’re reading about things you don’t strictly understand (restringing a guitar to attain a new sound, for example) but still feel that creative itch.

Anyway, Keef’s book includes a not-terribly-clear recipe for bangers and mash, but also a sort of food philosophy that I found interesting from a historical and cultural perspective.

I have quite solitary eating habits at odd hours, born out of mealtimes on the road being the opposite of everyone else’s. I only eat when I feel like it, which is almost unheard-of in our culture. You don’t want to eat before you go on stage, and then when you get off, you’ve got to give it an hour or two before the adrenaline subsides, which is usually around three in the morning.

You’ve got to hit it when you’re hungry. We’ve been trained from babyhood to have three square meals a day, the full factory-industrial revolution idea of how you’re supposed to eat. Before then it was never like that. You’d have a little bit often, every hour. But when they had to regulate us all, “OK, mealtime!” That’s what school’s about. Forget the geography and history and mathematics, they’re teaching you how to work in a factory. When the hooter goes, you eat. For office work or even if you’re being trained to be prime minister, it’s the same thing. It’s very bad for you to stuff all that crap in at once. Better to have a bit here, a mouthful there, every few hours a bite or two. The human body can deal with it better than shoving a whole load of crap down your gob in an hour.