You’ll have to excuse me if this post comes across as a bit befuddled- I’ve entered the entirely frightening state of adulthood where your friends- not your OLDER cousins or your OLDER friends- but YOUR FRIENDS- are getting married.

And it was so so so so beautiful. 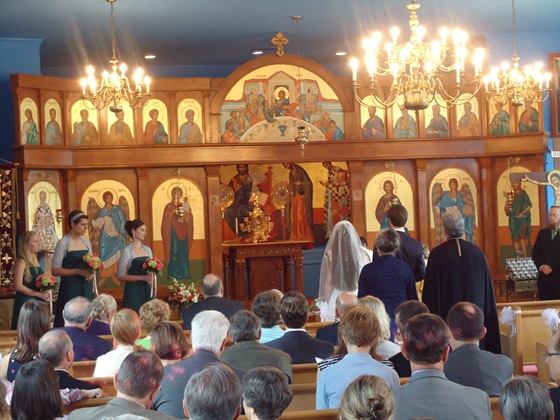 I’ve been friends with Virginia since middle school. We used to, among other things, sing in chorus class together. SO imagine my shock when not only was I invited to the wedding, along with my whole family (who has made friends with her whole family) but asked to sing along with the music.

Standing in the choir area at the back of the church, drumming my fingers nervously as I waited for the ceremony to begin, I felt entirely unprepared. Perhaps that is why I look so tense in this shot with my fellow sopranos (I’m that tense looking one on the left). 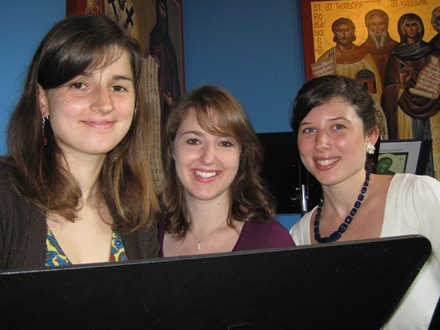 But it was beautiful. Even during that moment when the bridesmaid passed out. (Though that happened at the last wedding I went to, too. Ladies, eat a quality lunch and don’t lock ya knees!) 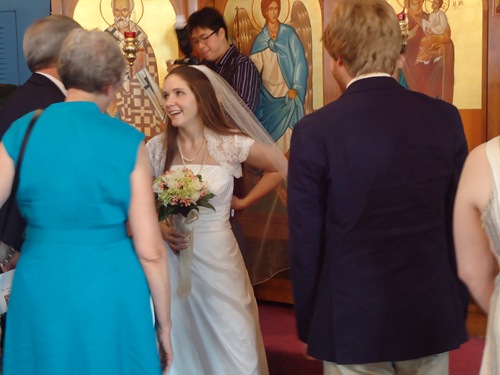 Naturally, I food blogged. The reception was held on the grounds of a historical, restored farmhouse that is actually just a few steps away from the lot where they hold the farmer’s market (my happy place). After signing the book, we were greeted with a tower of hors du’oeuvres. 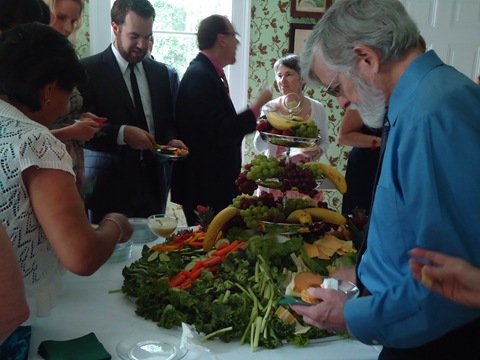 I wrestled off some grapes (harder than you’d think; they were big bunches!) and some other fresh fruit, bits o’ cheese, and nabbed an entirely delicious veggie quesadilla from a waiter going by with a tray. 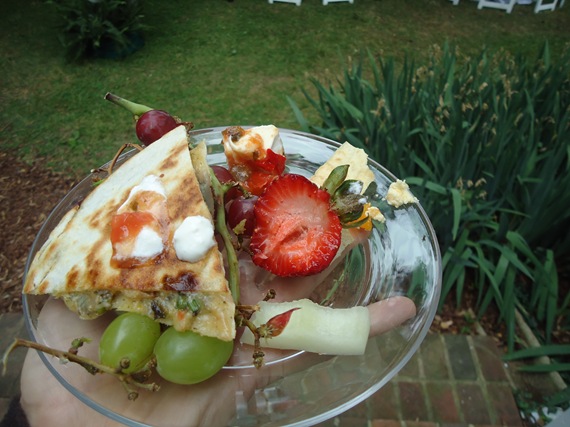 Though the weather seemed like it could’ve been ominous earlier in the day, God was just way too much of a fan of these two happy kids and it stayed nice. It was wonderful celebrating outside in the tent! 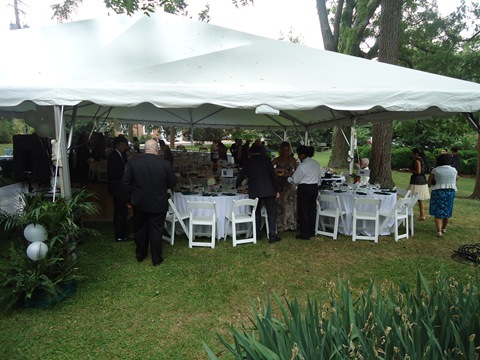 We started sitting at tables, listening to toasts and things (the bride’s father did a toast which would’ve been totally Kleenex-requiring even if it weren’t Father’s Day but OH YEAH IT’S FATHER’S DAY).

Tables were named for famous Virginians (home of the bride’s family- well and plus her name is Virginia) and famous Texans (home of the groom’s family. And there were more hilarious selections- including Tommy Lee Jones.) I was at Willa Cather. The table with the bride and groom, sheesh! Wow! 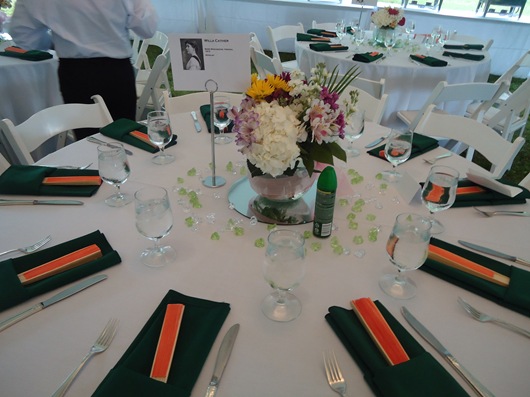 The beautiful place settings revealed that they also had a practical purpose too: those orange things were fans! They got used quite a bit later in the evening. 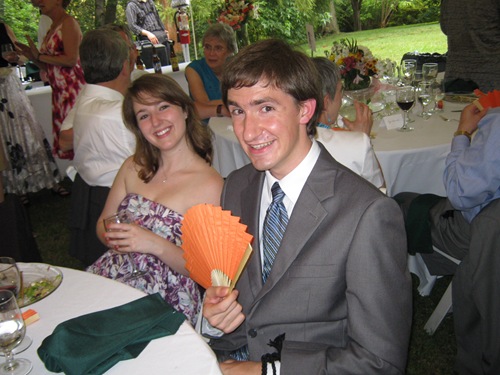 There were meat kabobs but I didn’t know where they were from and had a weekend low in veggies. So I happily ate salad, LUSCIOUS potatoes, yummy grilled veggies, and bread. 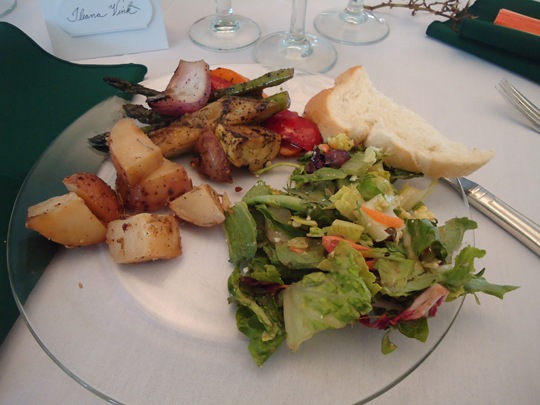 Then there was a quality bunch of dancing, whoo boy! The bride and groom kicked things off with some very impressive swing dancing. They both went to Saint John’s College in Annapolis (where Steve and I hung out the other weekend) and apparently there was swing dancing like once a week. And they were GOOD! 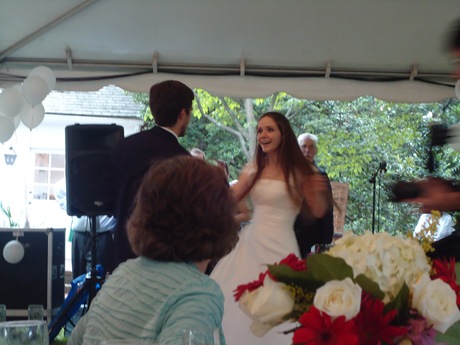 And then of course there was cake. I naturally got a shot (and you can, in fact, see my face in the background). 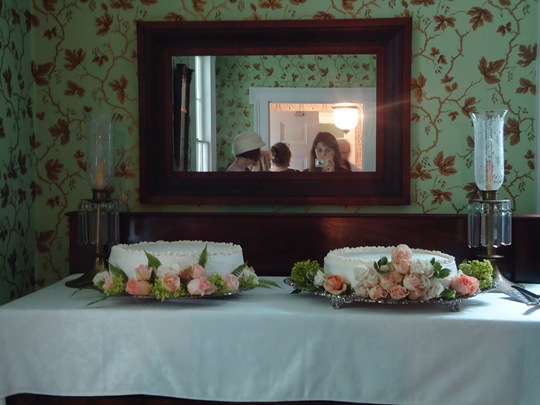 But then so did my mom! Hilarious! I’m turning her into a food blogger! And I like hers! 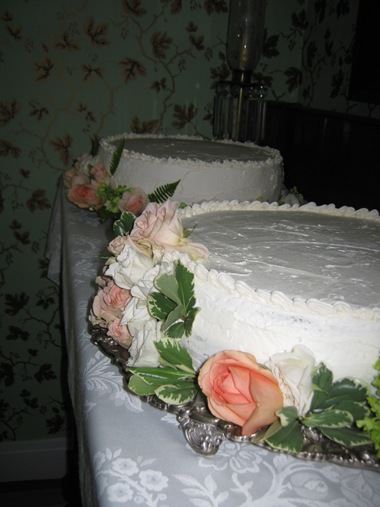 Cakes made with fresh flowers are so beautiful. Simpler is better! My mom said that in my grandmother’s catering days that’s what she always did.

You had your choice of chocolate or vanilla. BUT a large group of us started talking about how halfsies were the best for trying both so I went halfsies with one of the bridesmaids, who I HAD NOT SPOKEN TO PREVIOUSLY. What an awesome way to bond with a new person. Cake! 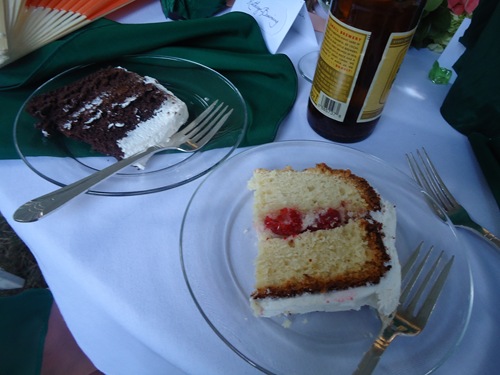 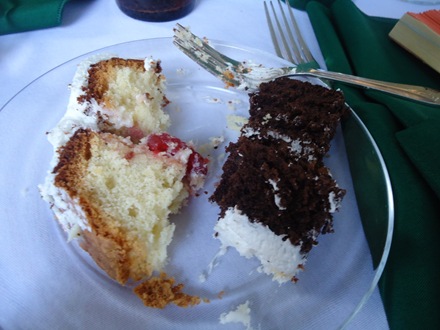 Generally, my first friend wedding did not freak me out as much as I thought it would. Yes, I grimaced at being herded for the bouquet toss and was entirely relieved to see it not go anywhere near me. Seeing two people make a really really serious commitment to one another reminded me what a huge deal the whole thing was. But man it was a really amazing thing to get to be a part of this monumental day for someone with whom I go so far back. And she’s great, and she’s great, and it’s great!

Congrats to the happy couple! 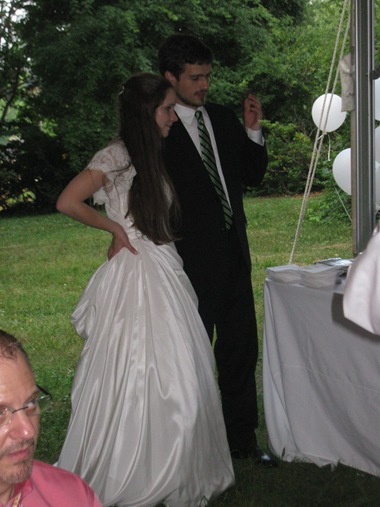 What a beautiful bride! I love her hair. Simple weddings are the best. I can't understand those over-the-top ones...my cousin went $10,000 into debt for hers, and they were fresh out of school with lots already too.