I haven’t been posting dinners lately and they’ve actually been great because right now we have three people who enjoy cooking in the house. That is nice!

I would be okay with it if my mom roasted chicken every single day. 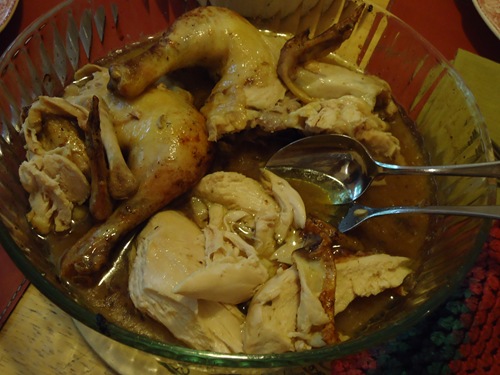 She just throws whatever fresh herbs we have, some garlic and butter in the cavity, then brushes some olive oil on top and roasts it. Squeeze a lemon on top towards the end.

We also get our chickens at Lebanese Butcher so they are halal and organic. Vair nice. Funny: this is actually a picture of a chicken we ate like two weeks ago, but I literally just ate the exact same thing. Complete with the exact same sides: fresh little spudlets and greens with oil and lemon juice. 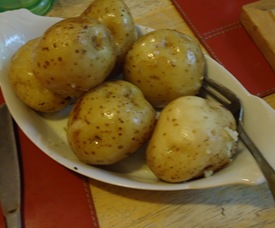 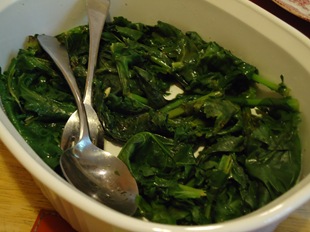 Such a well-composed meal. 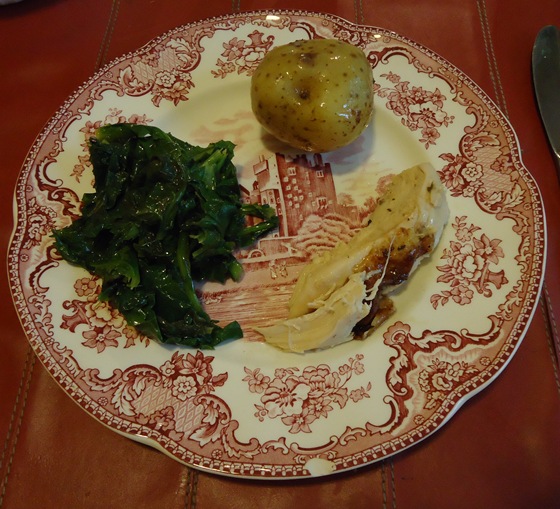 Obviously ate more than that. I just love a large pile of greens. Sometimes I think about how many people never eat greens, and I get very very sad.

My mom also raised me on the thrifty and delicious value of saving your chicken carcasses to make homemade chicken stock.

Which you can then turn into avgolemono soup. The way matzoh ball soup is Jewish penicillin, avgolemono is Greek penicillin. Chicken broth, eggs whisked in, cooked rice. Lotsa black pepper. 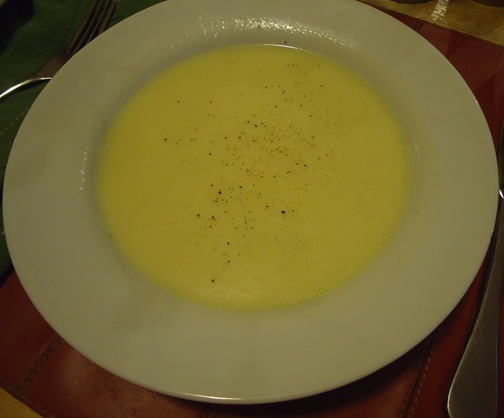 For a fun multiethnic touch, za’atar and olive oil on the bread we happened to have… bagel thins. It was good! 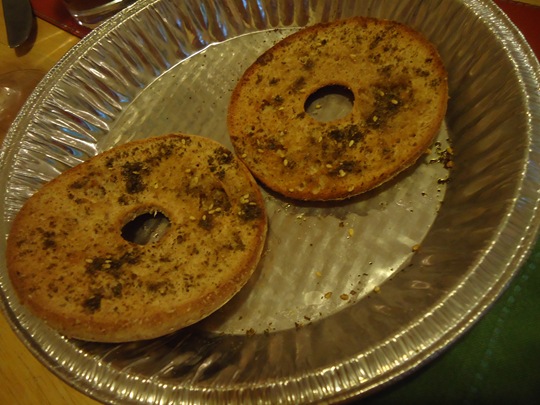 And for delicious nutritiousness, gorgey local asparagus, steamed with olive oil and lemon. (Isn’t it crazy how the juices turn pink? I thought my mom’d put on red wine vinegar, but it’s just some reaction with the acid). 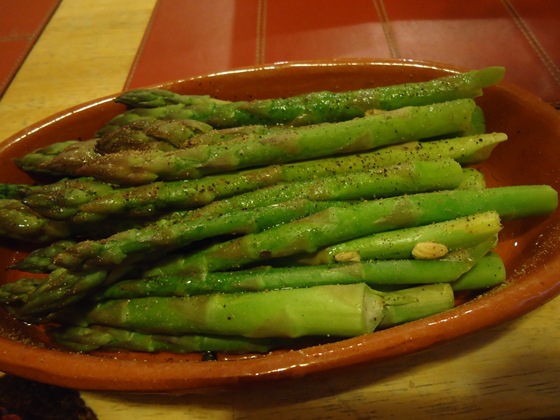 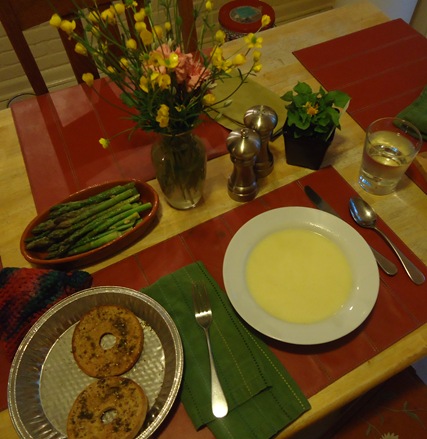 As for my sister- the other night, I arrive home to walnuts. Crazy delicious walnuts. Walnuts tossed with olive oil, thyme, and hot sauce, and roasted.

Shazam, guys. This is fantastic. 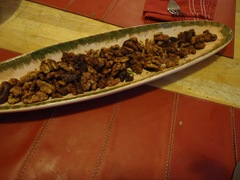 Then she brought out a dip she’d meant to make for strawberries… but we were out of strawberries… so she just served with the nuts. Sour cream, lemon zest, lime juice… that was awesome too. 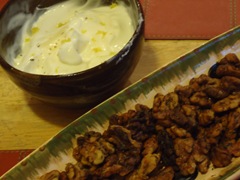 Her friend Jamie was over too and she did this awesome thing where she mashed garlic up with salt to make a paste and then infused it into olive oil. 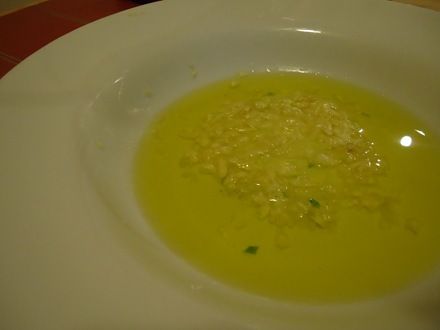 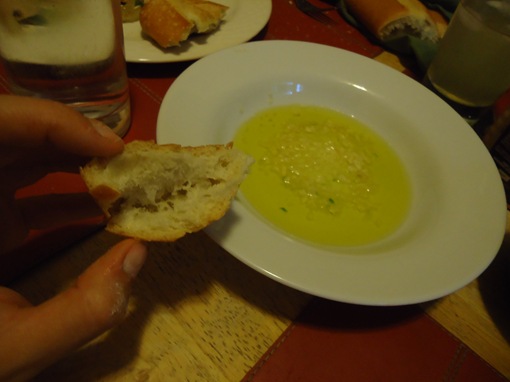 Also, you will have absolutely no fear of vampires after eating this.

My sister introduced this by saying she had made salad maybe five times in her life.

It was unconventional and highly delicious. 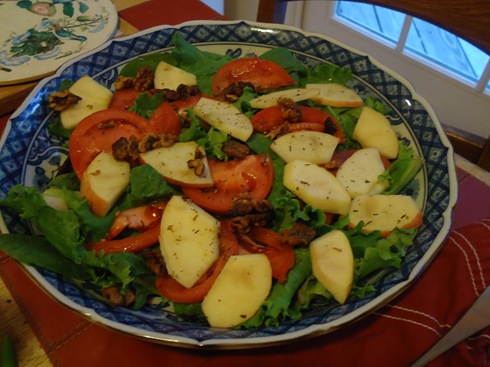 Local lettuce and tomato and apple (let’s just say another family member was the person who woke up early on a Saturday  to go to the farmer’s market to get them) and some more of those nuts.

Then she drizzled on a ton of Trader Joe’s green goddess dressing, which was another excellent choice.

And finally the entree… I forgot to photograph. It was ravioli. Mushroom and cheese, in tomato-vodka sauce.

The thing is, I’m really picky about my mushroom ravioli and I really just want it to be… mushroom. I love cheese but find it distracting in that. And then the other thing is… so I am a total backseat chef. My sister said she was envisioning,as she started preparing this stuff as I arrived home from work later than she, that I’d take over.

I mean, I didn’t take over her project.

so yeah. We had bread and olive oil, salad, ravioli, and… bok choy and tofu. 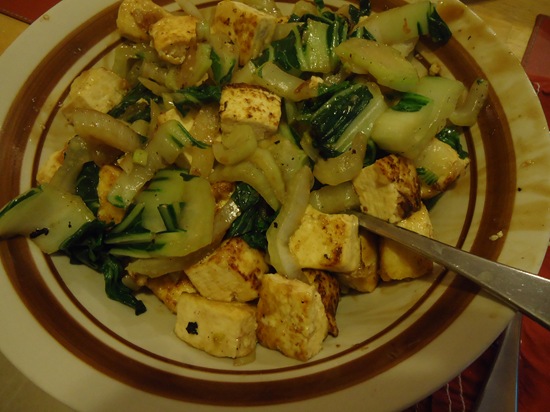 Fortunately my sister loves it :D

I, too, get very sad about people who don't eat greens.

I, too, get very sad when I see what amazing food y'all have been eating and want to have some, too!

Roasted chicken is the BEST!! I could eat it every. single. day.