So I had my big frenzy of lunch preparation, but hadn’t actually made any dinners.

So let’s talk about me and food magazines. Much like when I read my subscription of Vogue, I turn to them for pretty visuals and vague inspiration, but ultimately what is in their pages often has little to do with what is on my plate.

Despite that every month I dog-ear at least 5 pages, determined that this will be the time, this will be different, I will make them.

Well here was my chance! I pulled out some recipes and followed them! 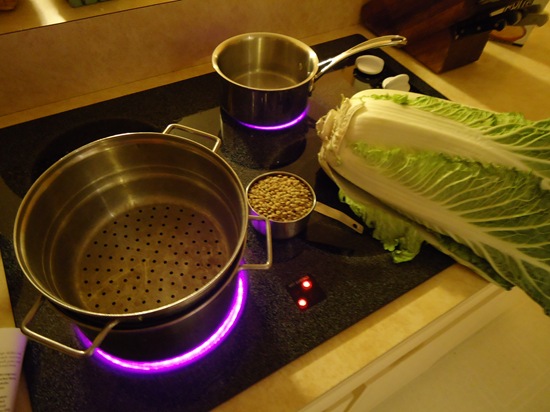 Well, says someone reading the recipe… there doesn’t seem to be anything about a steamer. Or lentils. Or Asian cabbage.

Well fine. I don’t believe in boiling, so I steamed the cabbage… And then, loath to waste water or nutrients, I simply reserved the steamer water and used it to make my couscous! 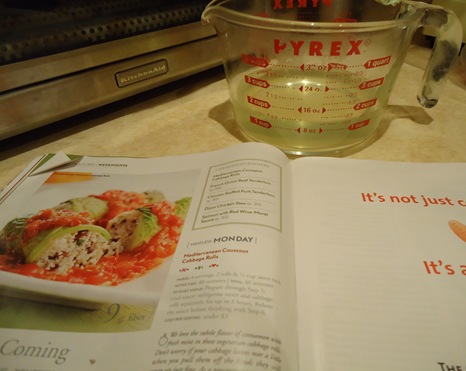 As for the cabbage, it was the absolute beaut we had purchased at the farmer’s market. And the lentils… just felt right. I love those little beans.

Okay okay fine, and I didn’t have any feta. But had lots of olives, and love them, so I added extra. And er had no mint. So parsley sufficed.

Aaaaanyway, the cabbage was not particularly the right shape for stuffing. And steaming rather than boiling it meant it was still pretty rigid. Nonetheless, if I do say so myself, I made a rather beautiful assembly line. 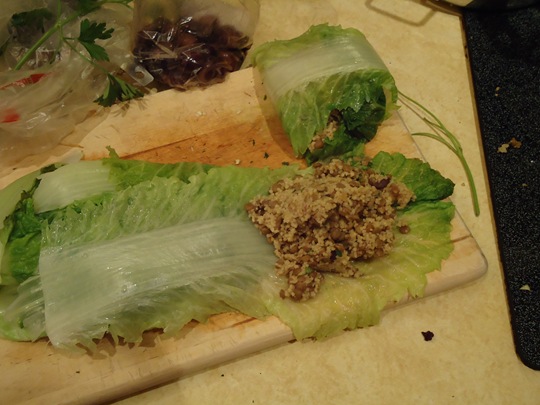 Aaaaaaand I followed the recipe for the tomato sauce exactly (well, except using canned tomatoes rather than chopped… so I just squeezed them in with my bare hands, which obviously felt awesome). 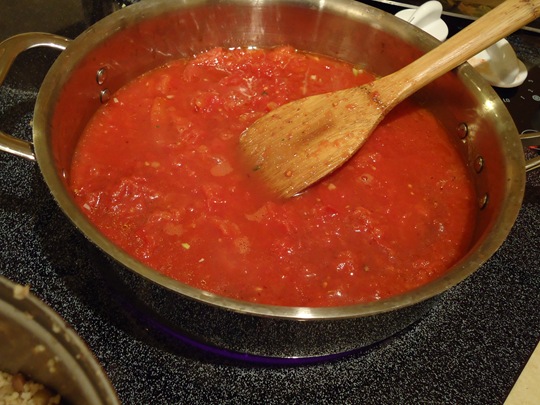 The recipe’s most admirable feature was the methodology that allowed you to cook stuffed cabbage QUICKLY. The secret is in the skillet. Nestled all together, covered with a lid, they cook remarkably quickly. And the tomato sauce sure is scrumpsh. 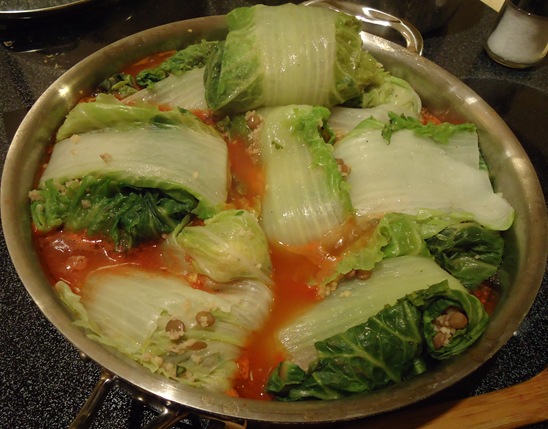 I am a stuffed cabbage roll. I am rather leaky and ugly. I taste soooooooooo gooooooooooooood. 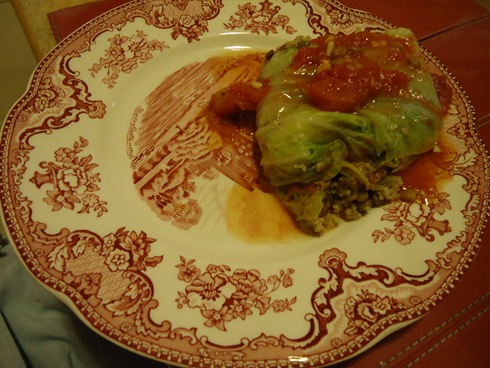 Had Steve over for dinner later in the week. Late night (I felt a serious need to hit up the gym after work after a morning meeting that involved three kinds of cookies and two kinds of fudge), and Malindi was on her way out but thoughtfully prepared appetizers for herself and Steve. And as I requested, photographed the mini pizzas.

With a carrot grimace, for whimsy. 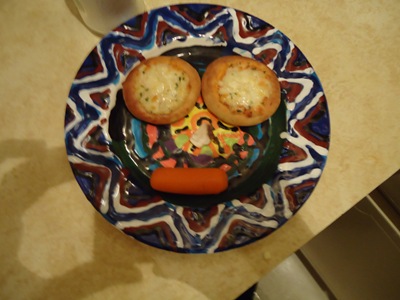 I set out to make some wholesomeness, in a recipe that I really did basically follow (except extra cauliflower and kalamata olives instead of green): the highly droolworthy Roasted Cauliflower, Chickpeas, and Olives from Cooking Light. 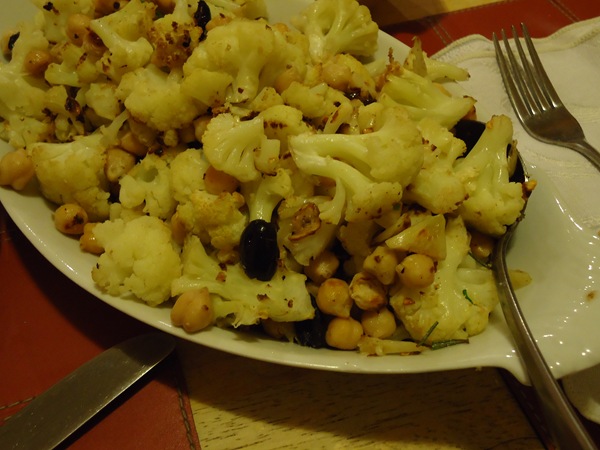 I made it with some kale, since I am the person responsible for teaching Steve that kale 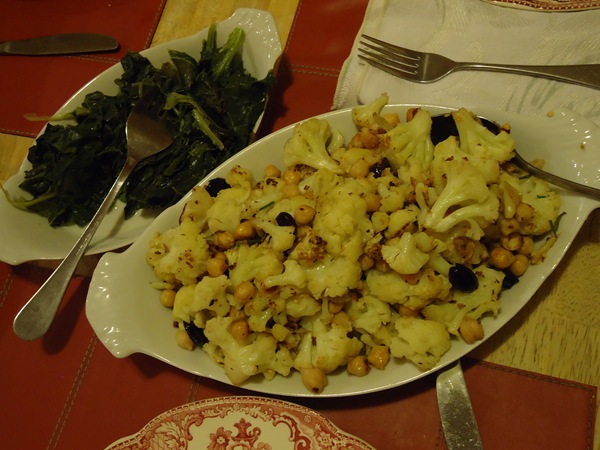 And my mother my boyfriend and I sat down for an adorable family dinner.

I tried my best to cater to the boy appetite, serving the chickpea thing that’s meant to serve 4, rounding it out with leftover salmon… 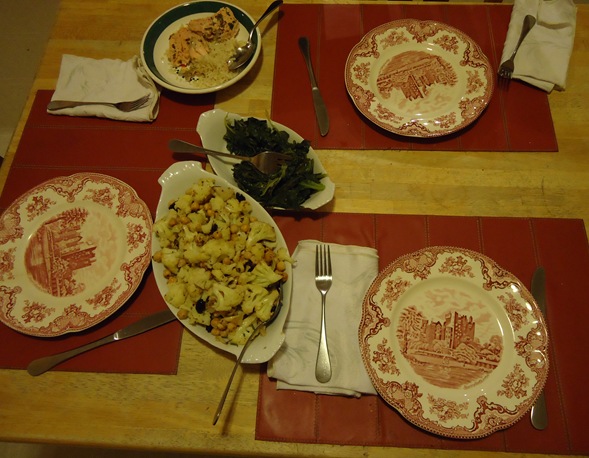 But let’s be real, it was a losing battle. Part of it was that Steve had biked over… from more than five miles away… in the snow… with leftover sandwiches from work.

So he had the above dinner for kind of an appetizer… for about 3 feet of ham sandwiches.