Title is pretty self explanatory.

I could talk about the utter *insanity* of doing this (and it really really really is) but I’ve been doing this new thing where I allow myself to be spontaneous and do things outside of my comfort zone and I was like wow, camping in December (seriously!) definitely qualifies.

The obvious first step seemed to be layers. Many many many layers. 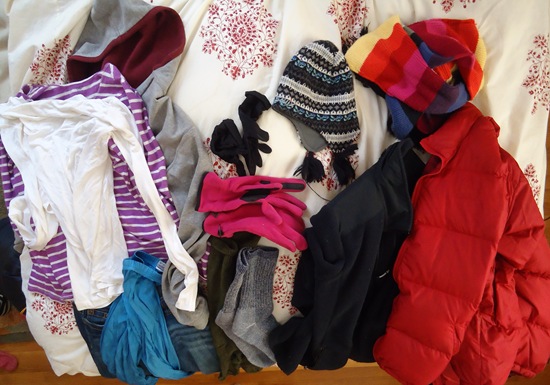 Accumulating those layers on Saturday morning took up a ridiculous amount of time. Then I decided that food would also be important. So I packed a nutritious lunch of some yogurt awesomeness, a salad, and a muffin (and grabbed the rest of the batch just because that seemed smart). 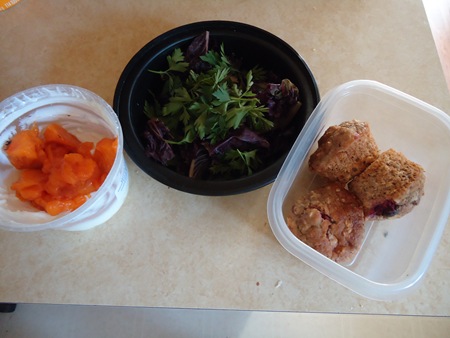 The yogurt, eaten in the car upon arriving at the destination and going “Hey, I don’t feel like I’m going to die!” and allowing myself to relax a bit, featured my FIRST PERSIMMON OF THE YEAR! I’ve had several sorry specimens sitting on my counter for several weeks and this one FINALLY was soft enough to be edible (cause you know about persimmons!). I had it atop some lovely fluffy local grass-fed cow produced Greek style yogurt and it was soul-revitalizing. 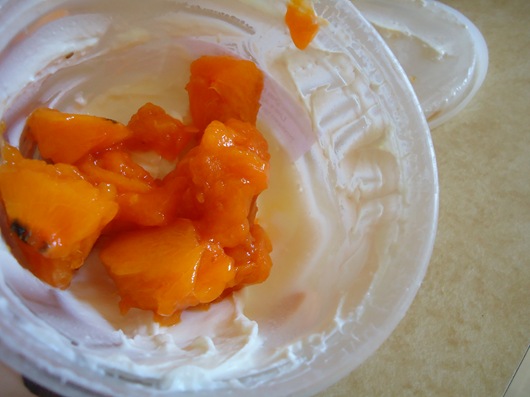 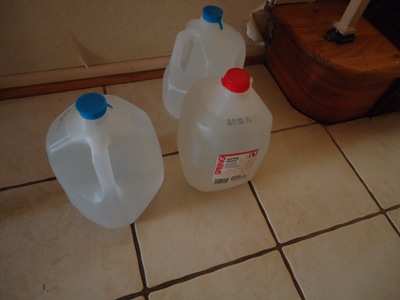 And some sweet potatoes. Obviously. 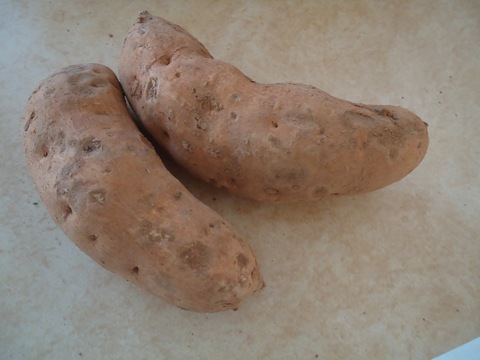 Then Steve drove up. We had ourselves a merry ride to the Shenandoahs singing loudly along with a mixed CD with mostly really awesome songs (with the notable exception of- anybody else on earth even heard of this?- “Date My Avatar”. You nerd.)

Oh, and Steve had brought some provisions too. Upon unloading: 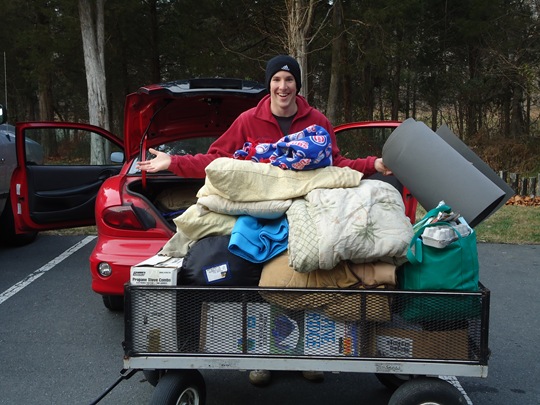 So it’s safe to say that we had a fair amount of stuff. Not visible in that was the fact that Steve brought both Trivial Pursuit and Taboo. Evening board games. In a tent. With no electricity. Who spots the flaw in that logic?

Took a nice hikesie around the park, pitched a tent, and looked, feeling reassured, at tent; wines; and, just for convenience’s sake, a hatchet. 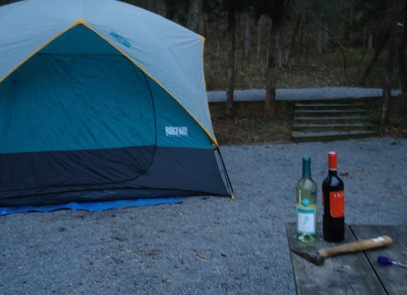 Shortly after that photo was taken, the sun set. With a great deal of gusto.

Fortunately, Steve is an experienced pyromaniac, and stoked the fire (also with a great deal of gusto). I love this picture despite it being mostly a blur. 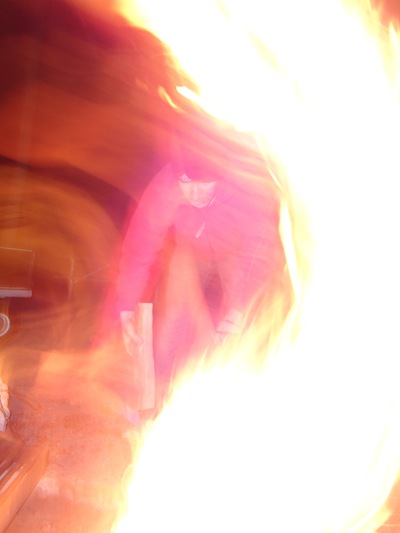 The fire’s first task was obviously taking the chill off a glass (or, er, tin cup) of the red wine. (Bear with me, these photographs generally vary between semi-invisible darkness and glaringly bright flash). (Also, no, the two of us did not come close to drinking two bottles of wine). 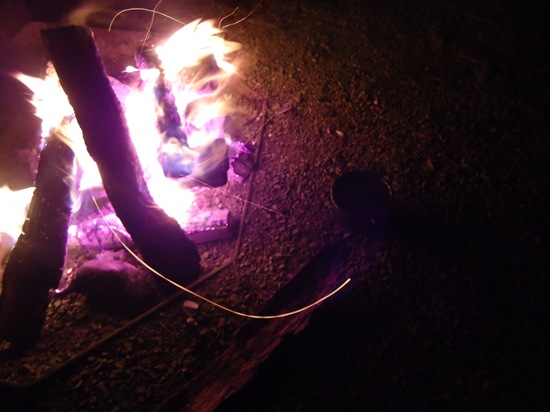 Well, okay, obviously, yes, I’ll explain. So in the very first Boxcar Children book (the only one, incidentally, where they actually *lived* in a *boxcar*), when they were camping out in the woods, Jessie or Violet (one of the responsible girls) included a vegetable with dinner by making potatoes in the fire. From my recollection of the book (which I haven’t read since I was, er, 8) she just stuck it in the flames: the skin charred, the potato cooked to hot tenderness within.

So in went some sweet potatoes. Because life is short and we should be daring. 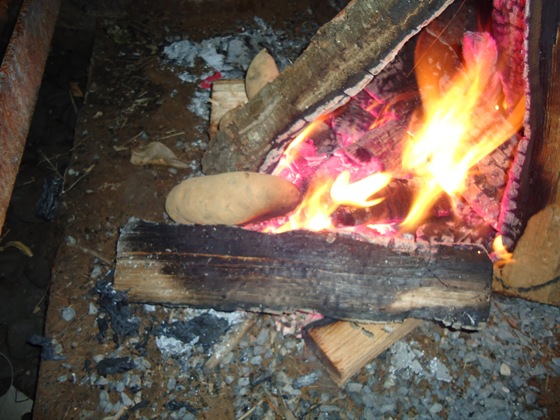 Meanwhile, I blindly took inventory of Steve’s impressive collection of provisions (by blindly I mean I pointed my camera in the general direction of the picnic table, took this picture, looked at it, and said, “Ooh! Soup!” 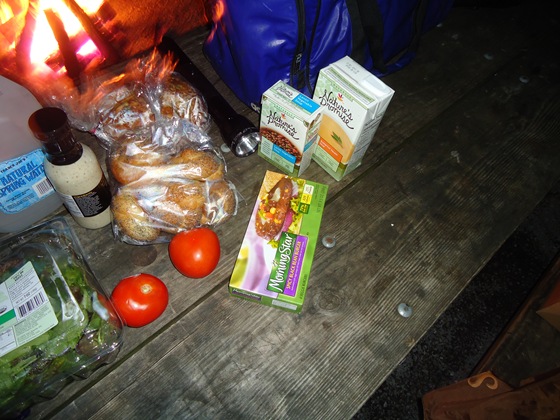 Steve heated up the butternut in our soup pot (yes, we had cookware on a camping trip. Thanks, Dad, for ludicrously decking us out!) which was mostly very successful except for a slight moment of panicked pyramid-collapse-repair-job in the fire which resulted in a flavorful sprinkling of ash into the soup.

It was still yummy.

And we toasted up that bread and, yep, ate the entire loaf. 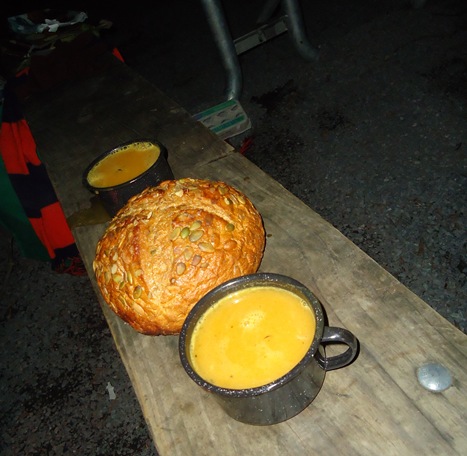 Some leisurely chatting and wine sipping later and it was time to take out the sweet potatoes which were a total SMASHING SUCCESS! Eating them with our bare hands (because we were camping and it is a great and obvious opportunity to eat like a caveman!), we peeled off the ashy skin and tossed it into the fire (obviously) and ate the sweet, tender, pleasantly hot yammy goodness within.

There were also scrumpsh Morningstar Farm veggie burgers, which we also ate with our bare hands. With lettuce and tomato, sans bread (because did I mention we ate a whole loaf of bread?) 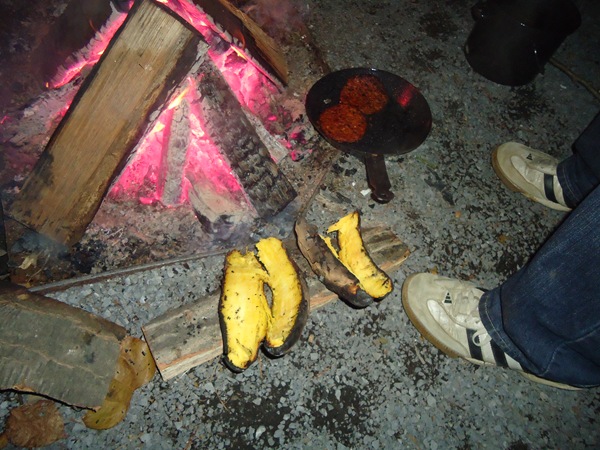 And then, helloooooooooo, we were camping and what else could the next step possibly be? 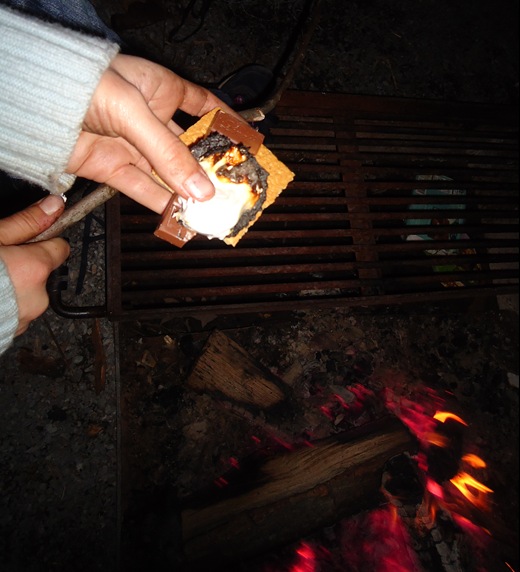 The immortal truth: you want s’more.

The immortal question: isn’t it kind of annoying when the marshmallow is all soft and melty but the chocolate is all annoyingly solid?

I give you the greatest s’mores technique I know, culled from a cute boy at summer camp who told me about it when I was 14.

Step 1: Put your marshmallow directly into the fire’s flame. Allow it to catch on fire.
Step 2: Immediately bring it, still burning, and place it directly over the chocolate. Spread it along the chocolate, and watch as the heat from the fire melts the chocolate. 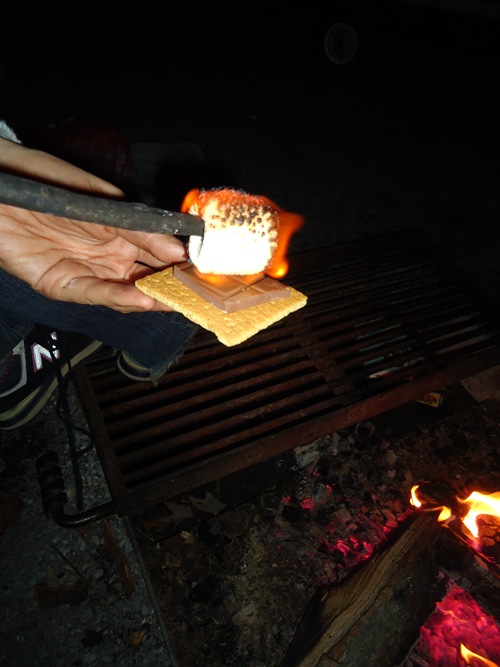 Honestly, it was the peak of the evening.

Cause yknow, the time inevitably comes when the fire dies and you retreat to the tent. And then, yknow, it being December and all, it gets REALLY REALLY REALLY REALLY COLD. And then the wind started HOWLING and trees were creaking and the zippers of the tent kept rattling sounding like serial killers were coming for us etc. etc. etc.

Not the most restful night.

Up with the light in the morning (before, er, the tent officially blew over), I was cheered and amused by the storage solution we’d come up with for one dirty pot. 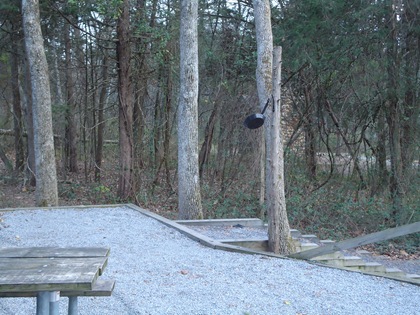 And then out came the propane stove! Again, thanks Dad! Fitting the propane canister was kind of a kerfuffle but we ended up with a hot flamey flaaaaaaaaame. Which I first used, urgently, to deliver some caffeine to my system. 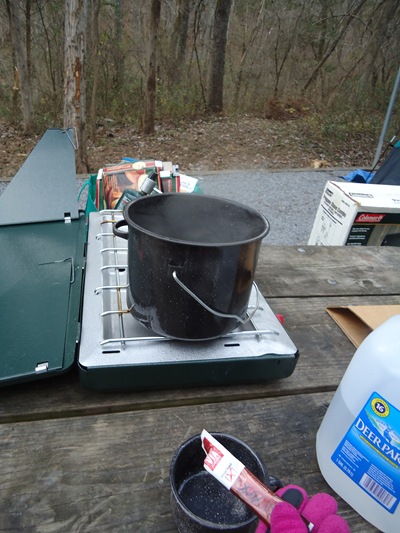 That wretched instant Starbucks coffee was maybe the most delicious thing I have ever tasted in my entire life.

Too bad that the deceivingly hot pot handle took one of my favorite pair of gloves as its casualty (though better melted glove than melted hand?) 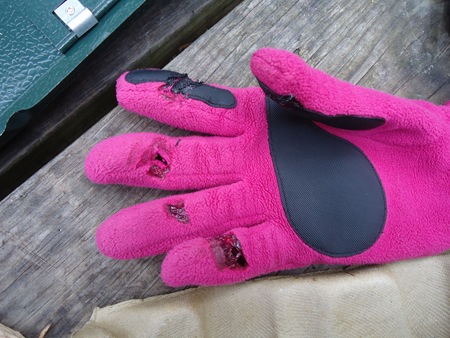 I persevered with the stove, because Steve, genius that he is, had brought the ingredients for the GREATEST BREAKFAST ON EARTH. 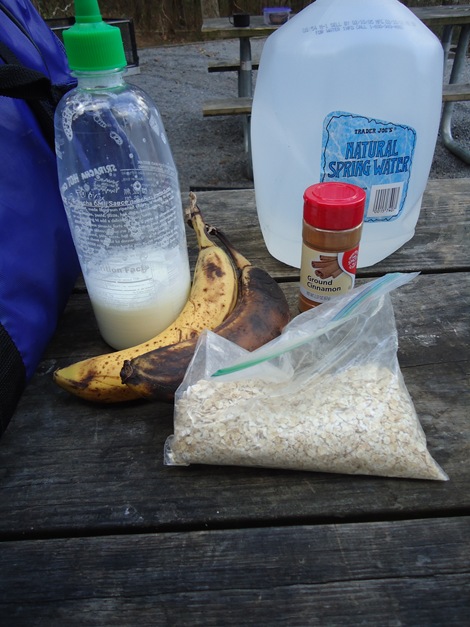 (yes, that is a repurposed Sriracha jar with milk inside. That is Steve: lover of yummy Thai spice and recycling)

And thus was made a delicious and hot (hot!) bowl of oatmeal. 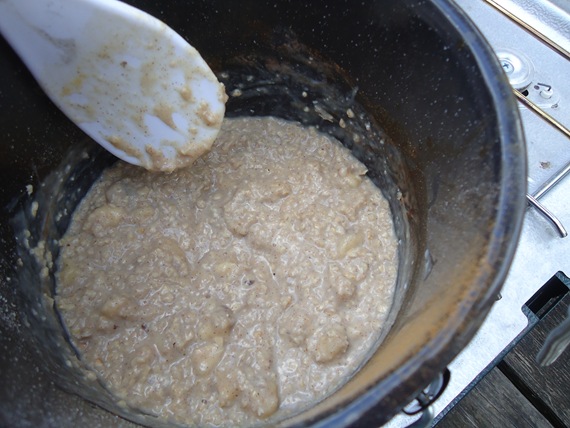 We’d been planning to climb Old Rag, Virginia’s most hardcore mountain, on Sunday morning, and I’m sitting there in the parking lot thinking “God I’m tired, God I’m cold, feigning enthusiasm for this will require some serious acting skillls”, and then Steve goes “I’d be cool with… going home.”

With a brief detour to a place my boss raved about when we drove by it on the way to a team-building exercise: 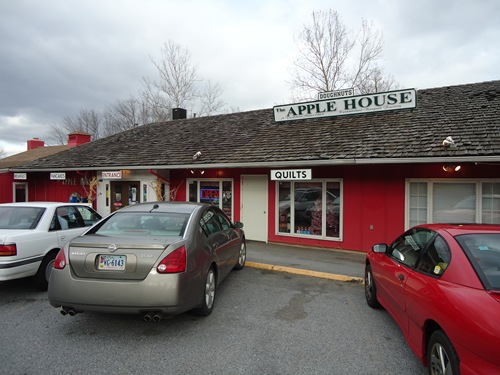 All places should welcome you with apple donut samples. 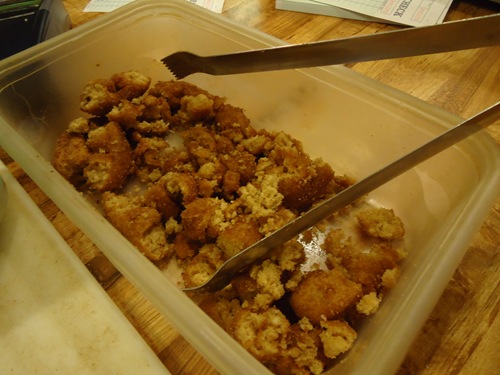 Bought one for my mom, got my dad a Thanks-for-the-tent-and-stuff slice of cherry pie.

Fantasized about ordering red velvet pancakes (!) or a pumpkin milkshake (!!!) for myself… 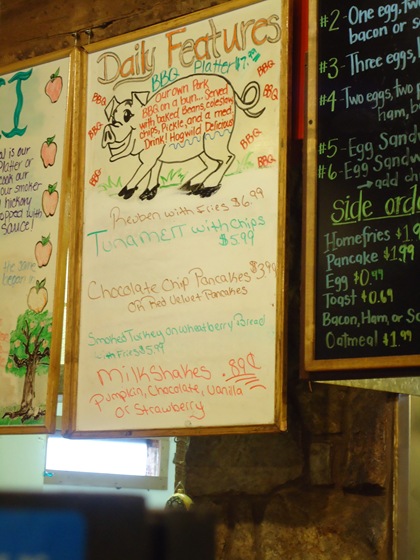 But ended up with a classy cup of coffee… 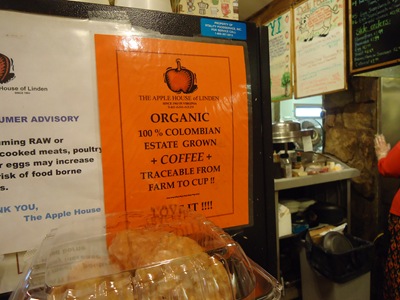 We went back to my dad’s to return camping-ness, and then did some quality lounging in front of the (gas!) fire. The boys talked about football, I did a crossword. Played some air hockey. Walked the dog.

Went home with an extremely large slab of my dad’s birthday cake. 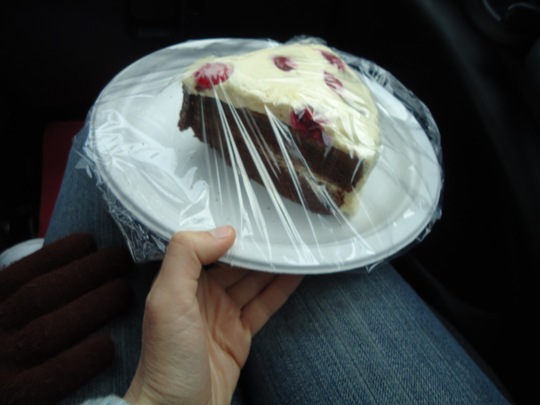 A delightful, though admittedly unusual weekend.

Left for work at 7:40 this morning. Went in to the classroom (I teachers-assist twice a week as part of my Americorps job).

Then was sitting in one of those little kiddie plastic chairs and went “Dear God, I don’t think I can stand up. I feel horrible and sick and dead.”

Then I went home.

Then at lunchtime, Steve showed up, on his break, with a vat of Trader Joe’s lentil-veggie soup. Lately I’ve been thinking I must have been very very good in a past life.

Camping in the cold sounds so fun!! But not really appealing here in snow city :)

I loved the Boxcar Children! Good times. I forget why it is they were homeless. Didn't they end up living with their grandmother or something after the first few books in the series?

Thanks for the marshmallow technique! I take smore making very, very seriously. I'll have to remember that for the next smore occasion.

oh my, I don't think I would ever have considered camping in such cold weather. I guess if you are prepared, it is not too bad. As long as you have a good time and are not miserable, then it is a success.

Why don't you Guild me up, Guild me up, 'cause (Date My) Avatar maybe is the best songs? It's like heaven passed it along...

I need you, I need you, more than anyone LeLe to lend your ear via this tune Avatar

Most Importantly: Thank you for the lessons in culinary camping. I've never tasted better s'mores or had such satisfying sweet potatoes.

Winter camping could be lot's of fun when you have the right stuff. I'm going camping in Mt. Hood with schoolmates this xmas vacation. It's true-the food tastes so much better when you camp, especially in the coooold!