My life is so FILLED with good cooks right now. I’m related to them and I work with them! 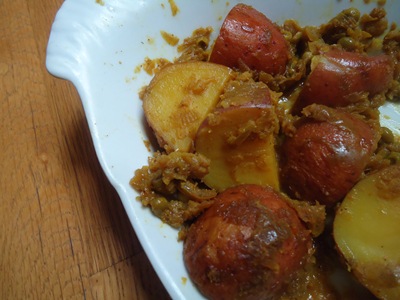 I LOVE having my mom explain how she makes something. I used to be fling-things-in-the-pot type, but lately I’ve been kind of a tightass about only using healthful ingredients and things that stay in the same… ethnic genre, if that makes sense.

My mom, however, started by sauteeing onion and apple (!) in oil. Then she added curry powder and let it fry to get more flavorful. Then the potatoes. Then she needed some liquid, so she would’ve added vegetable stock but we only had some in the freezer, so instead she mixed water with the last of some Annie’s Gingerly vinaigrette (!) and let that all cook down. Then the peas. Then she decided that was still missing some sweetness, so she added the last of our jars of Trader Joe’s cranapple butter and pumpkin butter. I love it! 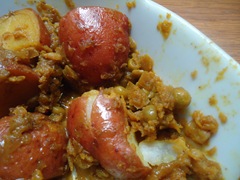 The ginger/onion/peas/spices made this… awesome jammy thing. Fab. U. Lous.

She’s also more inclined to make meat and deal with all the sanitizing hassle related to the raw stuff.

Worth noting: see this gorgeous lamb? 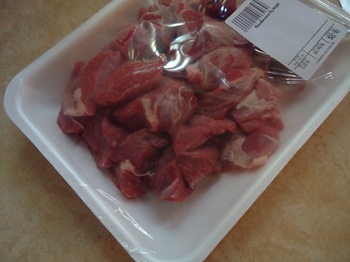 It’s from Lebanese Butcher, in Falls Church- everything there is halal and EVERYTHING THERE IS ORGANIC. They’re Muslim, so you can’t get pork, obvi, but their meat is beautiful and wayyy cheaper than other organic places.

My mom made this scrumpsh recipe for Lamb and Artichoke Stew, halfing it, subbing olive oil for butter (at my request), and with the (yummy!) addition of canneloni beans.

You cook the meat with tomatoey oniony jammy goodness for a long time til it gets mondo tender: 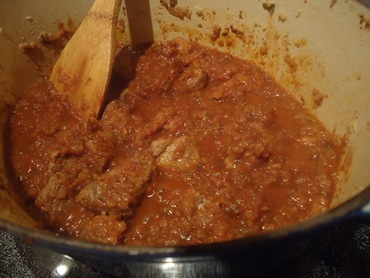 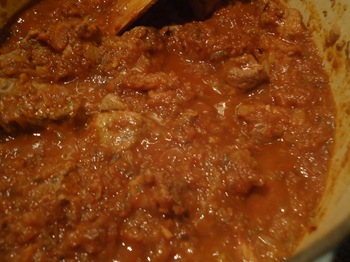 And then you add the beans and lemon and artichoke and you’re supposed to cook it for another hour and a half… so it was already 7:30 and we were hungry AND it seemed kind of gross to cook both canned vegetables (mush, ew!) and lemon juice (overcooked acid, ew!) for an additional half hour. So we just heated it through. 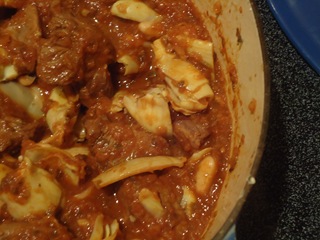 And plated it up with brown rice, arugula salad… 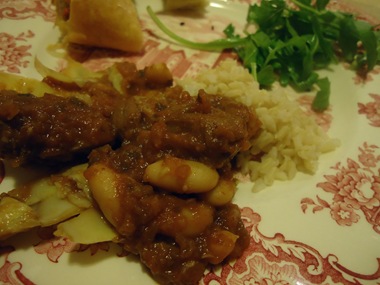 And farmer’s market scrumptiousness! I love the phyllo lady. We’ve gotten stuff from her before: she makes all these fabulous vegetarian (a lot of them vegan) phyllo pies. 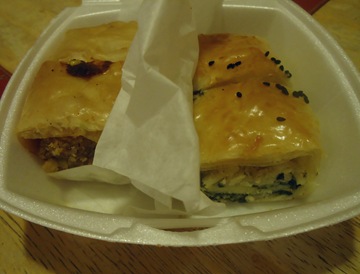 First we have a pretty standard but yummy spinach and feta combo: 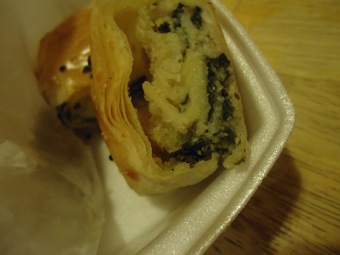 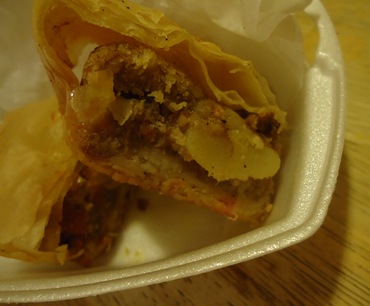 And now we arrive at the weekly Americorps Potluck (though we’ve been opening it up to friends and so on, so it’s really more of a potluck-initiated-by-myself-and-my-fellow-Americorps-members). I hosted again this week, and pulled out a fascinating farmer’s market purchase: 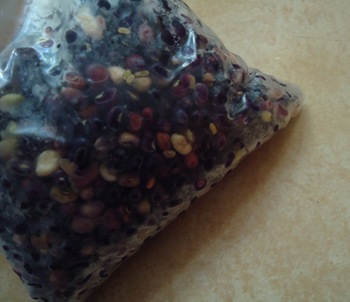 Fellow food nerds: have you ever found yourself going “… I’ve seen dried black beans… and canned black beans… but is there such a thing as fresh black beans? And where do they come from?”

Well, yes. There is. At the farmer’s market. 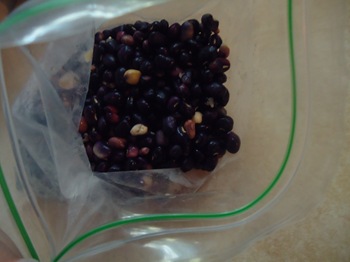 Per the farmers’ instructions, I covered them with water and boiled them for 35 minutes. This was not an attractive process, quite frankly. 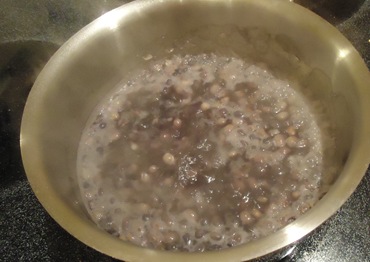 As for what to do with them, I turned to a fun one: Sundays at Moosewood. Mostly vegetarian, all-around the world, fun recipes.

They had a twist on an Egyptian fava bean ful, using black beans.

You take out the hot beans, then toss them with scads of olive oil, lemon, garlic, salt and pepper, and fresh parsley: 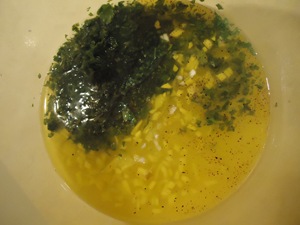 Then plate ‘em with tomatoes and, should you be so decoratively inclined, top with sliced hardboiled egg. 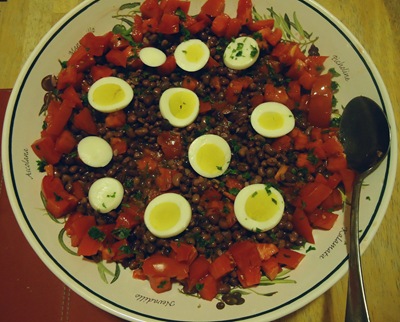 I really don’t know how to describe the black beans other than that they tasted like… fresh beans. They had the firmer texture and less mushiness and also that certain… fresh bean tang?

The salad was a beaut. 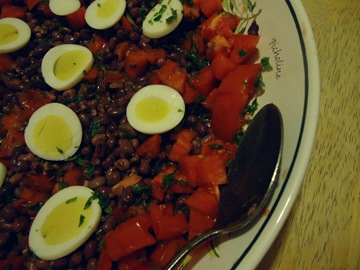 Then, as a clean-out-the-fridge, wait-for-people-to-arrive sort of project, I decided to make jalapeno poppers due to the fact that

1. We’d bought jalapenos in bulk and barely made a dent and
2. Every time my sister comes home she buys pounds and pounds and pounds of cream cheese because it basically constitutes its own food group for her, which is nutritionally troubling. And then she leaves and my mom and I eat about a teaspoon a month so that doesn’t get used either.

SO I stuffed jalapenos with the cream cheese and then rolled them in a “batter” of cornmeal and milk. 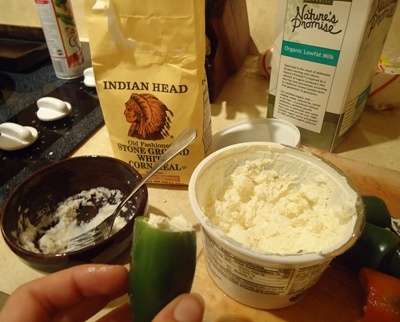 Half an hour or so at 400 degrees later, the “batter” was a total bust but the jalapenos were good, albeit SPICY! Me and the boys liked them :D 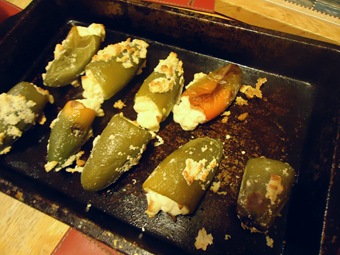 Speaking of boys, by this time Erin and Steve had arrived, and Steve started cookin’ up some shrimp tacos on my stove. 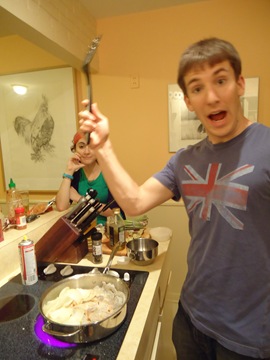 Started with onions, cooked til sweet, then the shrimp got thrown in and pinkified: 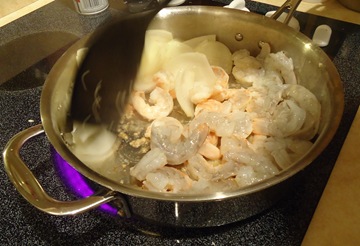 And there was lots of veggies, lime juice, and cilantro involved. Yum! 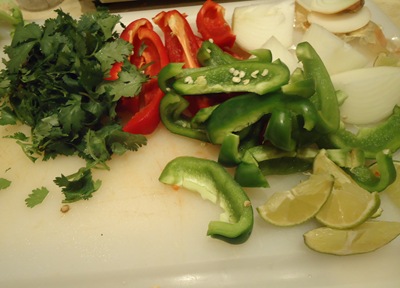 Erin, along with awesome homemade banana bread, brought along snack mix that she got addicted to when she was volunteering in India (!): 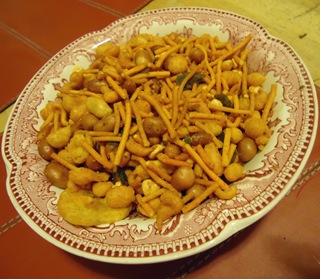 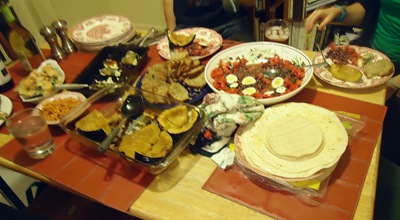 As usual, a small, unrepresentative sample. Could not stop with the squash or the banana bread. SO good! 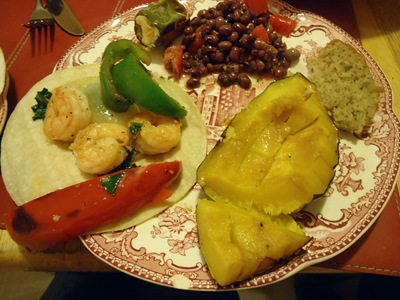 And conversation flowed, and we all watched my creepy pet spiders, whom I’ve now dubbed Hermione and Lisbeth after two of my favorite strong women in literature.

And life was good!

Such a glorious, glorious party!! SO cool that you found fresh black beans! I love the Sundays at Moosewood Cookbook - thank you for reminding me that I need to revisit it! :-) The presentation of your salad is truly incredible...

Thank you SO much for your tip about trying the lemon ginger echinacea juice warm! WOW! Wow. Wow. :-)

It looks like you had one heck of a party! Enjoy your weekend :)

I love my boyfriend, I really do, but...can I plug a USB port into Steve and download his cooking skills into my sweetie's brain? I don't mind cooking, but there are definitely nights when I wish my partner was culinarily inclined. Not only would I get a break from doing the work, but I also wouldn't have to worry that he's downing nothing but hot dogs and soda while I'm at a night class.

What a beautiful bean salad!

What a beautiful bean salad!