So we had to work Saturday morning, I had no Friday night plans, and Erin invited me for a sleepover.

When I am a guest, I tend to bring food. So I scanned my fridge and decided to go Indian. I hauled over half a head of cabbage, a bag o’ lentils, and my mobile pantry: 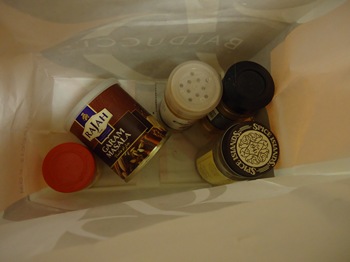 We all have our jobs for one year. If you are only living in an apartment for one year (as the rest of the gang is) you do not bother investing in garam masala. Ah, the perks of living at home.

So Indian food was made (and kind of ugly and I was super tired so I didn’t bother taking a picture!) 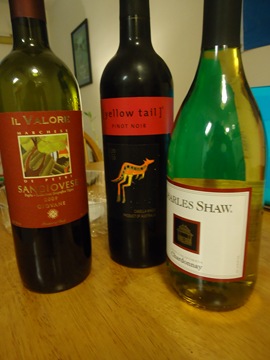 No no I jest. We only drank one (well though honestly this was because it turns out the others were Caroline’s and she was out of town and it seemed sad to go to CVS for wine).

But we did go to CVS for JUNK FOOD! 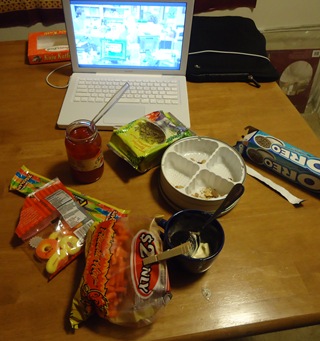 There was ice cream (vanilla and cookies and creme). 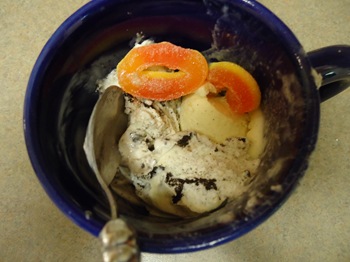 There were maraschino cherries which I adored as a child but man guys they are DISGUSTING! Hahahah. We all ate one out of the jar and were kind of in awe of how our taste buds had matured (just like us, clearly, *ahem*) 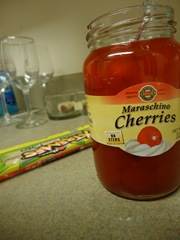 And then like one hour of Office watching and Jenga playing had passed and so Steve was obviously  hungry again. So he tried to make a grilled cheese.

The first time was not entirely successful, due to the distracting allure of Michael and Dwight’s shenanigans. 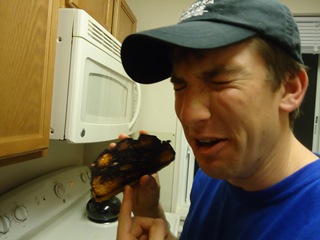 He was all “You are going to eat a third of  this” and I was like “Nooooooooooo, I am gestating a food baby and cannot eat anything else ever!”

And then it was there all cheesy and beautiful and crispy and I ate at least- AT LEAST- a third of it.

I love unhealthy food. It makes me so happy.

PLUS I woke up EARLY with NO ALARM Saturday morning filled with goodness and well being. That is clearly what late night fatty food does for the body.

I scampered down the walking trail near my friend’s apartment for a solid hour and fifteen (I also gathered sticks for our Saturday program for the little kids- I made a lesson plan with a magic theme and we made magic wands, so cute!)

I returned to Erin’s and enjoyed breakfast in front of the lovely foliage outside her window. 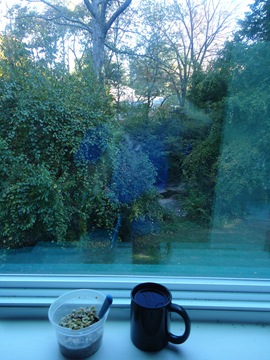 My breakfast was delicious! Not wanting to eat other peoples’ breakfast food (speaking for myself, I have a fear of running out of breakfast food and would never want to jeopardize someone else’s breakfast supplies) I brought my own overnight oats in a tupperware. The usual mix with a wee bit of blackberry yogurt, some bananer, milk, oats, chia seeds, and walnuts.

And I “borrowed” some of Caroline’s Dunkin Donuts hazelnut coffee. Duuuuuuuuunkies your coffee is so gooooooooooood! 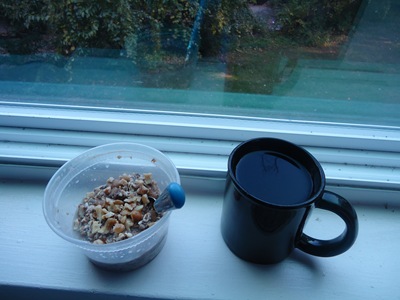 Work was relatively painless and then I was COERCED into going kayaking.

Okay well not really but kind of but here’s the thing: I am someone who stresses over logistics and they were unfortunate such as dealing with parking to get to a place somewhere near the water in Georgetown and it was cheaper to get two doubles but there were three of us and who wants to be along in a kayak? that would suck! and yadda yadda yadda but Erin and Steve abducted me and then it was DELIGHTFUL.

Here we are on the river: 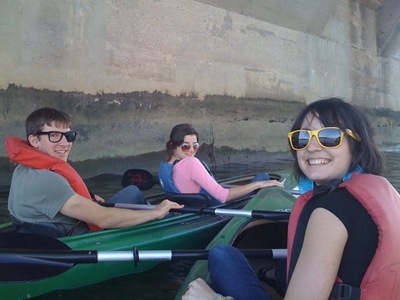 But wait, you say. Who took that picture? Some kind of friendly otter?

No, instead, we (and by “we” I mean Steve and Erin and not me) decided that the obvious thing to do would be to wander through Georgetown til “we” saw someone alone and ask them to go kayaking with us.

Which is how poor Michael, a COMPLETE STRANGER, ended up, alone and helpless, in a boat with Erin.

But man kayaking is so fun! Well I mean Steve kept splashing water on me and trying to get us stranded in the mud on the side of the river. But man, we saw ducks! We went under the Key Bridge! We sang songs! Singing American Pie sitting in a river is FUN!

Then we decided to head in the direction of the monuments where my li’l Sony managed to get a right nice picture: 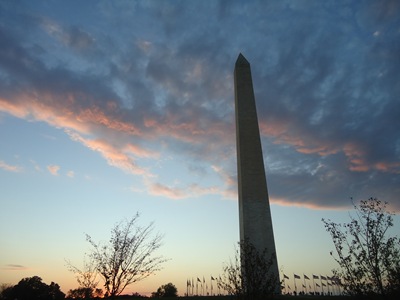 Then Erin left for a date (obviously).

And Steve and I walked back to Georgetown. And perhaps it would be fair to say it was a more… scenic route. It was… interesting. There were points when maybe there were more lanes of traffic to cross… without a crosswalk… than would’ve been advisable.

And it took… awhile.

But we made it, and promptly COLLAPSED at the delightful establishment that is Georgetown Wing Co. (a sports bar) upstairs, where we sat, and Crepe Amour downstairs, from whence we ordered our food.

Libations (do I even have to say which is whose? PBR? Really? Do I have to say?) 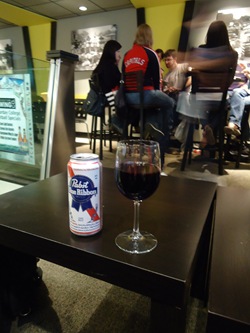 So when you have spent basically the entire day exercising, your body is sort of keen to metabolize the first thing you put into it.

When the first thing you put into it is an alcoholic beverage, you may notice that you become rather giddy in a rather brief period of time.

There was also entertainment: 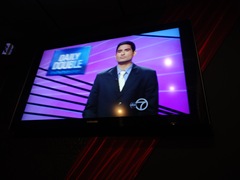 Love Jeopardy. As far as I’m concerned, that should be the *sports* in *sports bar*. However, this ended and they put on some kind of… baseball game? 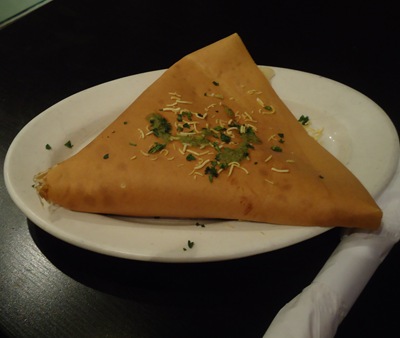 The Bachan, with spiced potatoes, green peas, crispy noodles, cilantro sauce, and tamarind chutney (it tasted like the inside of a samosa, mmmmmmm). 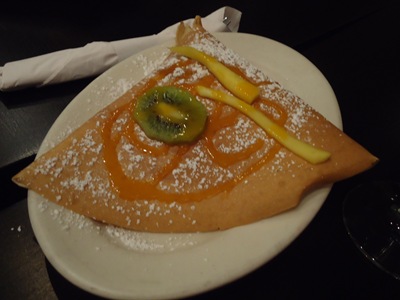 And the Madagascar, with kiwi and mango.

The Bachan tasted like the inside of a samosa. You kept biting into cumin seeds. It was AWESOME! The Madegascar was a bit more boring.

Anyway, I was pleased with these shots (and then Steve was like “Hey! Do you see the world through food blogger picture images! Cause when I used to climb rocks I used to see buildings as a series of cravasses to climb up!” And I said “No, no. I am actually very bad at taking pictures). 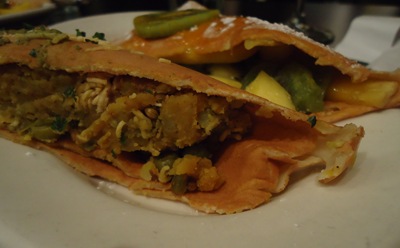 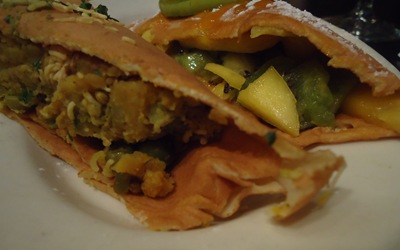 There are also all these slightly blurry pictures on my camera that I seem to’ve found amusing when my body was having its blood alcohol content spree on one glass of wine. I will spare you.

A final note that I did all this jaunting around the fair city in Erin’s flip flops (I was told you must wear sandals for kayaking, and I hadn’t brought any for our little sleepover. So I borrowed Erin’s).

Erin is about two shoe sizes smaller than me. 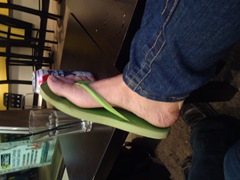 Actually, the day was fitness ridiculousness.

So… the morning walk, according to MapMyFitness, was 4.3 miles.

The walk from Rosslyn to Georgetown, then going around the monuments, was 7.3 miles.

And… yknow… I went kayaking for an hour and fifteen minutes an hour as far as paying for kayak rental was concerned (thank you, kind boat center people!)

Apparently… I got a lot of exercise on Saturday?!

Which is why I have been EATING MY BRAINS OUT today :D

theres nothing like good friends, good food and good wine!! with some inactive activity on the side ;)

I love when you summarize my weekend for me. : ) Hope the shoes were ok...

Way too much fun. I wish I were your friend in real life and not just in blog world.

There was a lot more I wanted to say, but I've forgotten. Oops. :)