So Saturday we wanted to avoid Glenn Beck and his hatemongering friends tourists downtown, so we decided to stick to Arlington for our first group night out.

Mixed success- my friend, Lena Seikaly, is a ludicrously talented jazz musician and she was playing in Shirlington, but we stepped in and we were decades younger than everyone there. So we moved on.

Then it was to Busboys and Poets, where I had my first taste of organic Merlot (meh at first but it grew on me as it breathed, and the fact that I noticed that made me feel like a connoisseur) and we chatted.

And then we needed some frozen yogurt. I am now a big fan of Yogi Berry, which can be found on Campbell Ave. in Shirlington.

Like all FroYo places, the “small” and “large” are hilariously similar. 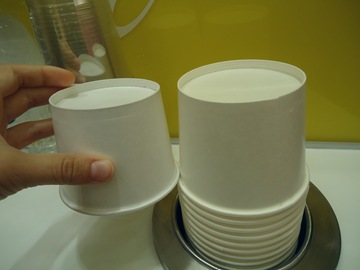 But the topping selection is phenom. Lots of fun fruit… 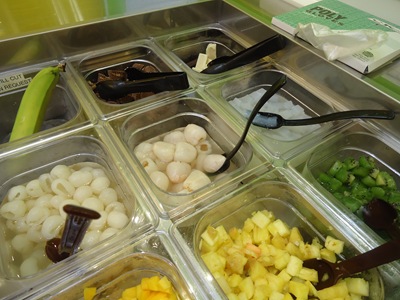 But we were all stoked to see FROSTED ANIMAL CRACKERS! The greatest thing in the entire world ever. 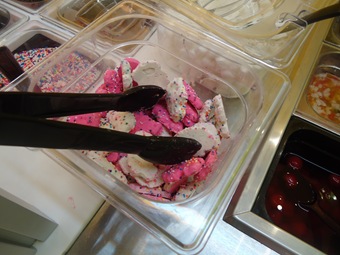 Yogi Berry is my preferred form of frozen yogurt establishment: self serve, get whatever mix of flavors and toppings you want, pay by the ounce.

I’m a Libra. I’m indecisive. I love sharing food and getting tapas and getting as many little tastes as I can. I hate “$3.50 for one flavor of yogurt and $.50 for each additional topping” places. HATE. Well and they’re disgustingly overpriced. I mean, froyo in general is a total rip off, but if I’m getting ripped off I want to be getting exactly what I want.

Some of the more intriguing soft serve choices:

I sampled the lychee (my Taiwanese stepmother buys fresh lychees- if you have never tried one, I highly recommend them!) but ended up going with a taro-oreo blend.

I was excited to explain taro to Erin, who had never heard of it. I loved taro flavored anything. I really want a Korean person to adopt me.

The yogurt comes out of the soft serve pump RAWTHER quickly, so I ended up with a tad more than I meant. But fortunately there is no such thing as too much froyo. 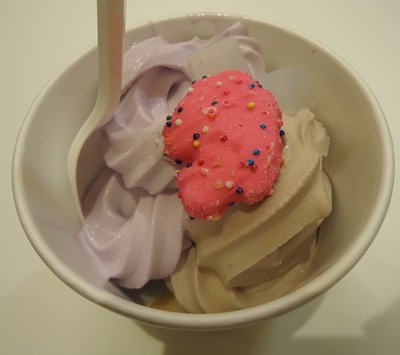 With an animal cracker on top. Along with what I thought were the coconut jelly blobs I so savored and enjoyed on my shaved ice in Thailand… but weren’t :(

Anyway, it was a nice night. It was a pretty intense week: we worked full days Monday through Friday and then had a four hour community event on Saturday. I left there and went, “uh, going out? Perhaps instead I’ll sleep til Monday morning!”

However, I forced myself to go to the gym, because it usually has Prozac-reminiscent effects on my mood (well I mean I’ve never taken Prozac but anyway it elevates it) and I promised myself I could just take it easy and then I went for an hour and by the end was rockin’ out on the elliptical to the dance music on my iPod. I love when I get reenergized!

So it was nice to get dolled up and go out with my new coworkers.

All I really need to be happy is egg and avocado. 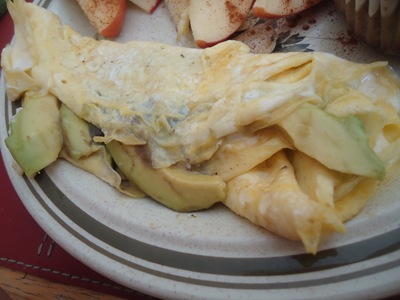 I’ve been going crazy on the farmer’s market eggs- poaching, pancaking, pie-ing- but I think is the first time I’ve just made a straight up omelet.

My God. Fresh eggs are so good.

I rounded up the plate with a Trader Joe’s banana-chocolate muffin and a cinnamon’d apple. 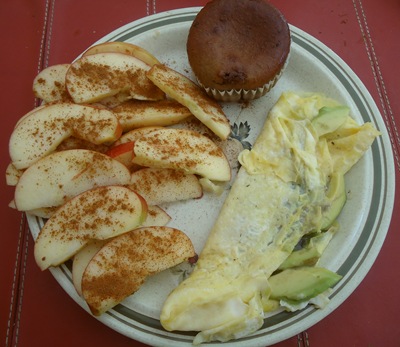 Along with Earl Gray and the Sunday paper. 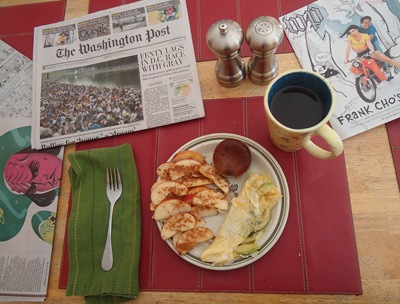 mmm I love lychee! One of my fave fruits that I definitely don't get to eat very often.
And that avocado looks fab... I miss them so much! I developed an avocado allergy a few years ago and I crave them constantly now :(

i LOVE frosted animal crackers (which are really cookies, no?)!!!! i wish my froyo place had 'em.
i would love to try oreo froyo, too. my local ice creamery has a coffee oreo flavor that i dream about.

Ahem.. you forgot to mention it was a dumpstered muffin. I could have gotten ARRESTED for that beautiful addition to your plate. Not really...

and Sonia. Im sorry for your (avocado) loss. That's one of the saddest things I've ever heard.

oh my - those frosted animal crackers just totally took me back to happy place! love it!

Fresh eggs are the best :) and those animal crackers are so cute, hehe.

you definitely can never add too much froyo! although, i am impressed with your toppings restraint. i usually shoot for a toppings theme and end up with oreos, reeses pb cups, gummy bears, m&ms, mango, snow caps, chocolate chips...and the list goes on :)