a tale of two shrimpies 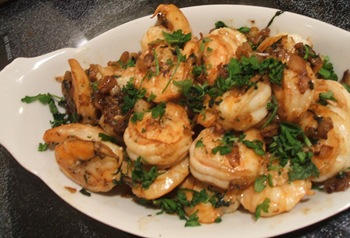 No, I did not get it at a restaurant where chefs are paid to make things taste and look fabulous. I MADE THAT. Omg omg omg.

Not only that, I made TWO THINGS. Here’s how it happened…

We had a lot of shrimp :D

We had a lot of shell-on shrimp, ugh. Instinctively, an ugh. Shelling and deveining is a pain. BUT. Whilst perusing recipes, I found some that involved making shrimp stock with the shells.

Which means, obviously, that from now on I will be, when in the possession of shell-on shrimp, unable to throw the shells away like a normal person now that I know they are USABLE.

I knew I wanted to make tapas-style shrimp. With the possibility of stock, I also got it in my head to make *shrimp bisque*

So I peeled and deveined. 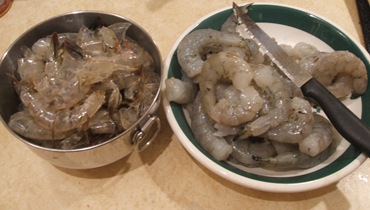 Since we’d relied on the “Yeah, that looks about right” weighing method at H Mart, where we bought the shrimp, I had about 18 ounces of shrimp.

So okay cooking math (the best kind of math :D): the tapas cookbook recipe called for a pound of shrimp to serve 3-4. I 2/3’d that to serve 2, so that was about 11 ounces. That left me 7 for chowdah.

I prepped my aromatics: 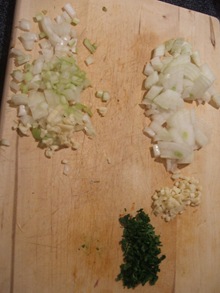 For the chowdah on the left (onions, celery, n garlic) and for the tapas on the right (onions, garlic, and parsley).

Got my stock on: 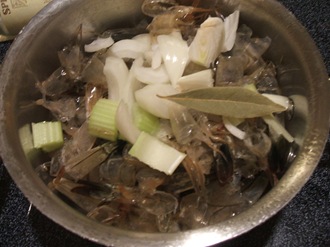 Into my pot went the shells, big hunks o’ onion and celery, and a bay leaf. Then I covered with water, brought to a boil, and let simmer maybe an hour and fifteen minutes or so? Longer equals more flavah, obviously.

In the end I ended up with a gorgey golden stock: 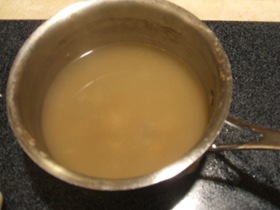 I drained that, cleaned out the pan, and threw in buttah and olive oil (buttah cause cmon this is bisque. Olive oil because it lowers the risk of  burning and is heart healthy). 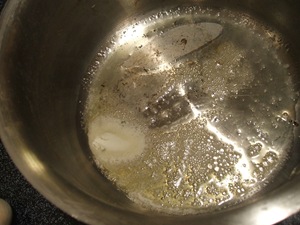 Then I added my tinily diced celery and onion, and cooked gently on medium low. Then I added some flour. 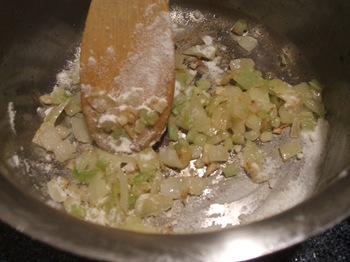 Then went in my homemade stock and a splash of sherry. I brought everything up to a simmer and tossed in the shrimp. When the shrimp had just cooked through (and were pleasingly pink) I threw the mix in my adorably ancient blender, along with salt and pepper and a splash of hot sauce: 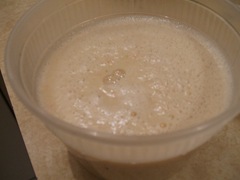 Saving these for another day. Will report! But I had a wee taste and it’s goooooood.

Guys, this technique was QUALITY. I have fun throwing together my little recipes, but having a recipe written by a professional chef who knows the science is a whole different cuppa tea.

This is from Mediterranean Cooking by Paula Wolfert. It is a GOOD COOKBOOK!

You begin by adding, all at the same time, olive oil, minced onion, and water. 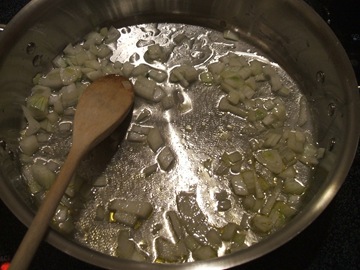 Then you let it cook until the water evaporates, which takes about fifteen minutes. This is BRILLIANT. The onion cooks til it is meltingly golden and delicious, and it cannot burn! 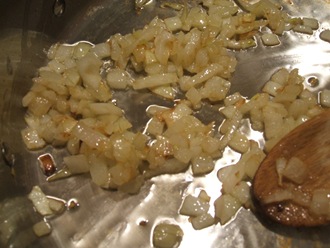 At that point, you put in garlic and parsley: 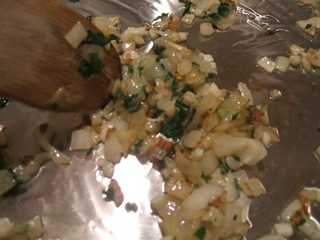 And then, your stars, the shrimpies, on BRISK heat. You cook them verrrrrrrry quickly; just two minutes (stirring CONSTANTLY) and then you deglaze the pan with wine and cook one minute more. 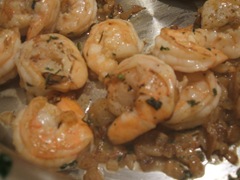 The final result, topped with a bit more parsley? 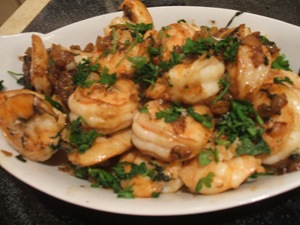 TRANSCENDENT. I love Spanish food so hard. And when you think about it, the concept of this is a lot like scampi, but it’s made with heart-healthy olive oil and it’s light and fresh, instead of greeeeeeeeasy like, in my opinion, scampi too often is. 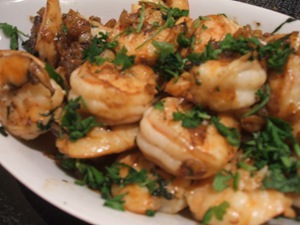 And the onions achieved this subliiiiiiiiiiime jamlike consistency. Sweet and rich and heavenly!

This being Spanish food, on the side I had some patatas 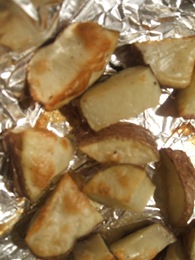 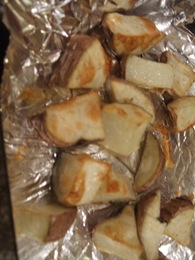 And a nice simple salad: 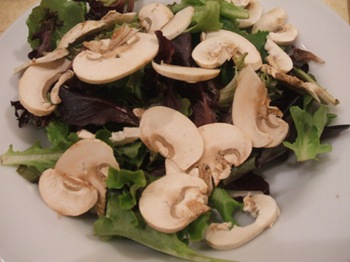 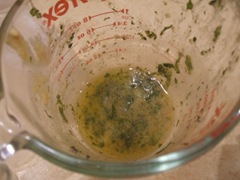 And that’s what I did with all that shrimp!

Wow! Looks delicious! I love adding new techniques to my cooking arsenal...Looks like you got a good one.

seriously that looks beyond excellent presentation and all!

we cant have shellfish in our home because my lil bro is deathly allergic. no amount of washing it from utensils can get rid of it. i prefer to not kill my brother if at all possible.

I'm impressed, looks great! It also looks like you had to do a lot of work!

yuuum! I am starting to re-love shrimp again, your dish looks yummy. The great thing is, is that at Costco it's only $10 for a huge bag of shrimp. Raw OR cooked!

Um, wow - that dish looks amazing! I don't eat meat but I would for a taste of that!

wow! That looks sooooo good.
I've got to try it!

that is absolutely gorgeous!

I'm so glad you visited my blog! I'm Greek too so it was super exciting to read your "about me" section (as cheesy as that may sound)

It all looks so delicious! I adore simply prepared, fresh foods like this - yum :)

I like your comments about cooking the onions in not only EVOO, but water too, bc this is how I always cook onions in our house. I do it to lessen the amount of oil needed and they turn out perfect everytime :)

OMG, I'm soooo impressed!! You should open a restaurant, seriously!!!

I am VERY impressed! That dish looks AMAZING!

Wow- that makes me crave some fresh seafood! Fresh shrimp just cannot compare to frozen (which I usually buy).

yay, good for you! shrimpies are one of my favorites. I make them for dinner all the time =) That dish looks absolutely delicious.

Oh my God!! Your cooking really does look straight out of a restaurant. Such talent! I love shrimp, thanks so much for the recipe!
Thanks for visiting my blog today!

Yums that shrimp looks amazing! It looks just like my mom's and that is a compliment =).

I'm such a huge fan of shrimp! And while I'm not Orthodox, I'm definitely trying to do meatless Fridays. These look really fantastic. While I'm not so big on the bisque, the tapas shrimpies look epic ;)