It’s easier to make tuna salad when you, in fact, have TUNA. Regrettably, when making lunch today, I did not.

Not wanting to lure psycho killers, I hadn’t mentioned until her return that my mother was out of town but she was, Wednesday through Sunday, and I kind of just didn’t feel like buying groceries (in my defense, both my parents turn into frat boys when left to their own devices- my dad’s bare cupboard you’ve seen, and as for my mother; when I got back from Asia there were the carcasses of two rotisserie chickens in the fridge and VERY LITTLE ELSE).

Anyway, I made do with a snack plate. 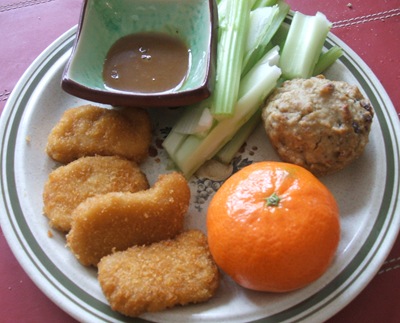 TJ’s chickenless nuggets (which I later, OBVIOUSLY, doused in hot sauce), a darling clementine, a thawed frozen date nut muffin, and my veggie of choice for the past SEVERAL days, celery, with the AWESOME dipper of Annie’s Gingerly.

I went and saw my grandma this morning and she forced, FORCED me to take some candy when I left (she has a seeeeeerious stash- the sweet tooth apple did not fall far from the tree). So I took a piece. I mean, I respect my elders.

There is something magic about chocolate and crunch. Perfect pre-gym snack. 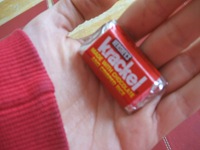 Supplemented with 10,000 Craisins. My Costco sack of Craisins is serious business.

Anyway, I made not one but two trips to grocery stores today. First to HMart for gorgey produce: 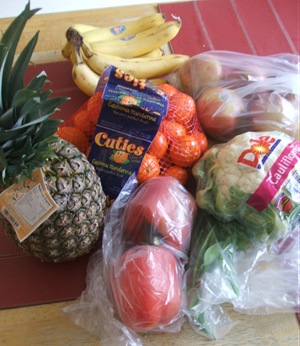 Naners, clems, pineapple, and Fuji apples; peppers, snow peas, and cauli. For the princely sum of $10. I seriously cannot remember life before HMart.

My second trip was to plain old Giant where I mainly bought cleaning supplies, cat food, and yogurts. I am well, WELL on my way to Cat-Lady-hood.

On the bright side, my favorite yogurt of all time was on sale:

YES. Coffee yogurt. It was also a really fabulous post-gym snack. There was that big study about chocolate milk being so effective, and the same building blocks are in this bad boy- lowfat milk providing protein and sugars, a bit of caffeine for pep. And it is SO INSANELY DELICIOUSSSSSSSSSSS. 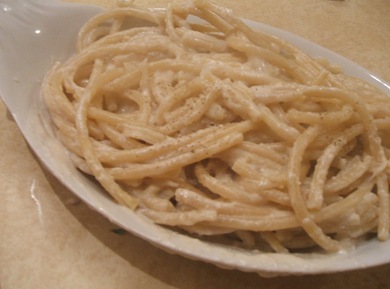 I’d been eyeing the recipe for Fettuccine with Cashew Cream for awhile, for when I sought something classy. Then I decided to just make it cause it was Monday! Along with an unphotogenic salad. 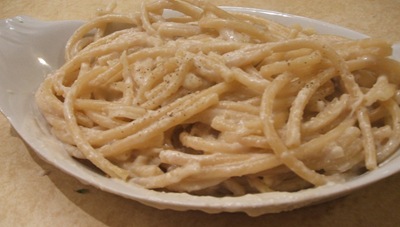 I made it with bucatini instead of fettuccine, but other than that followed the recipe exactly. I have to say, I was expecting a special flavor to come from the cashews, but it ended up tasting EXACTLY like fettuccine alfredo.

I’m sure that is fabulous news for those who love fettuccine alfredo but don’t love saturated fat (this stuff has the good MUFA’s out the wazoo!) but on the other hand, I wanted to taste the cashew!

Now for some ask me anything. First of all, other bloggers have been getting hilariously rude comments, but apparently you all are really polite and nice! A few I’ve received:

are you currently in a relationship?

In case the cat lady comments earlier in this post didn’t already clue you in, I am deeeefinitely not! I anticipate being single for the foreseeable future. I’m a big fan of independence. And honestly not such a big fan of men at the moment (one in particular).

What did you get your degree in? What do you plan to do with it?

Funny that you ask- look what I got in the mail today! 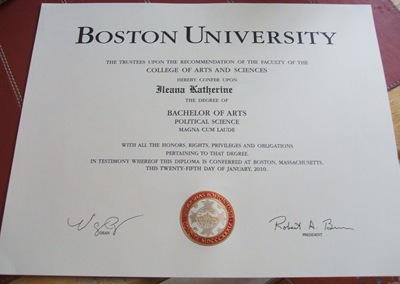 That would be one college degree :D With honors! Thank you, thank you. I also, in my opinion, get a little laude for so skillfully airbrushing my last name!

I majored in Political Science and minored in Anthropology. I am a believer in education for its own sake, so I studied those things because they were what most interested me. However, I ultimately hope to work in some kind of do-gooding profession: maybe for a nonprofit, maybe public health or (!) nutrition. However, I’m starting to realize that a lot of those jobs require Masters’ eeeshhhhhhh.

You can still go to ask me anything. I continue to be touched how many people seem to actually read my blog… like, ON PURPOSE (not just when googling “how do you say i’m hungry for a sandwich in spanish”, which Google Alerts informs me is how some enterprising person found this blog) and I’m genuinely curious to know if people are curious about me.

ahh love the diploma! My diploma is currently in my home town but the beautiful leather case/book is sitting on my dresser!

Cashew cream sauce.. sounds pretty yummy even though I am not into the cream sauces.. hmmm

We can be cat ladies together! No big. Must try cashew cream sauce - gosh I miss dairy, esp alfredo.

My grandma is the ultimate sweet tooth - we were at a bridal shower yesterday with an amazing buffet, and when I looked at her plate it was, candy, candy, more candy, cupcake, chocolate covered strawberry, more candy. I guess it's hereditary..I might be guilty of the same.

I am a fan of mixing completely random foods together that do not usually go together. It is a satisfaction in every taste bud

If you do consider a Master's degree, go with Public Health, I loved my program at UNLV and the field can include so many things. Beautiful diploma from BU and congrats on graduating with honors.

You went to BU? Crazy. I went to MIT. We could have walked past each other in Boston many times and didnt' even know it!

I swear I'm not sure what my parents eat when I dont' cook for them. Take out probably.

I've been wanting to make that pasta for a while! Gonna have to give it a shot...I do love fettuccine alfredo.

That recipe is now bookmarked and will be made very shortly! It looks so delicious!

Congrats on getting your diploma :D

I don't think I've ever seen coffee flavored yogurt. I'm going to check for it the next time I'm at the store.

hey..thanks for stopping by at my blog..Congratulations on your graduation, it feels awesome right !!
Guess what I was up in Boston till last year !!back to MD now