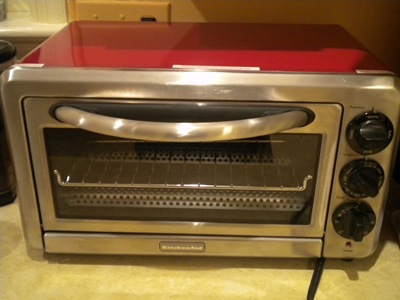 And my RIDICULOUSLY GIGANTIC new skillet! 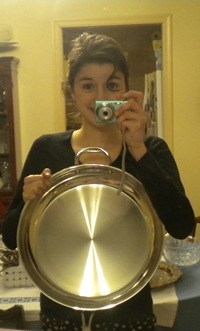 Should I ever need to go into battle, I’ve got a shield!

Here it is with  my standard 9 inch or so frying pan: 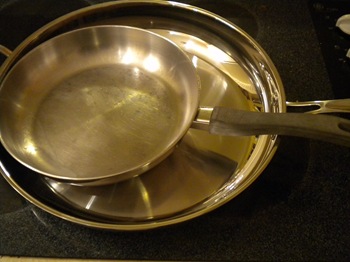 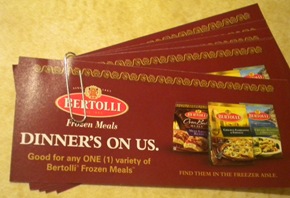 I broke in my new oven to make some seriously succulent Trader Joe’s chickenless nuggets: 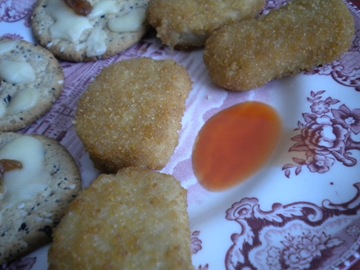 I was SO STOKED to have the mini oven! It is completely ridiculous to heat up a large, energy-hogging oven when I can use my little countertop dream. And when I’m heating up like 20 square inches of food total, who needs the power?

Had the last of the awwwwwwwesome carrot ginger soup 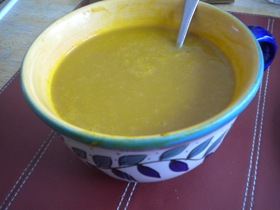 In my current favorite mug/bowl 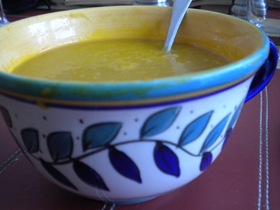 And finally for the last few minutes of the nuggets’ cooking time I added some classy crackers: 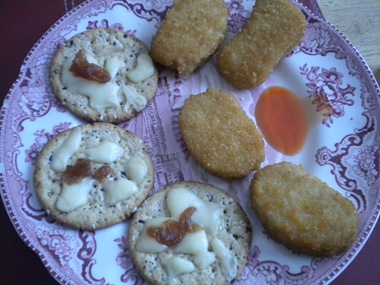 Those’d be whole wheat crackers topped with Jarlsburg and some of this FABULOUS STUFF: 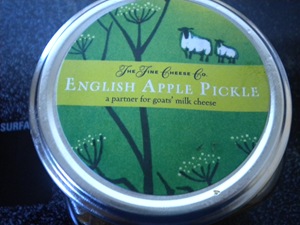 This was a gift from my cousin and her adorable English husband. It’s just apples, onions, raisins, and seasonings, and it is LUDICROUSLY DELICIOUS. 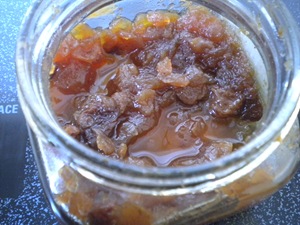 I’ve been eating it straight out of the jar. 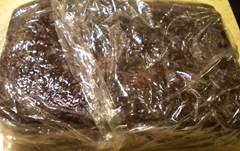 I know many are going “Eurgh oh my God is that fruitcake? Does anyone actually eat that stuff? I think there are just three fruitcakes that people have been regifting each other since 1900”.

But but but LOOK: 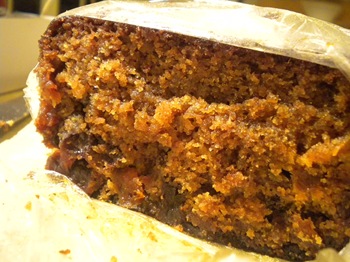 Like many, I have the visceral response when people say “fruitcake”. But this is not the usual bone-dry tasteless thing scattered with those creepy looking gummy fake fruit things.

This is SPICE CAKE. Delicious moist spice cake with luscious dried fruit. It’s how I intellectually rationize it.

This is actually another recipe from my grandmother’s hit parade, which she got from an article that claimed it was Emily Dickinson’s recipe. Cool, eh? My aunt made it for us :D

Anyway, this is sort of gruesome/awesome: before she died last Christmas day, my grandmother had made fruit cake. It was so packed full of booze that it was perfectly preserved, so we actually served it when we had a lunch after the funeral. If you knew my grandmother, you would understand that she would wholeheartedly approve of contributing to the menu at her own funeral.

Something else kind of gruesome: 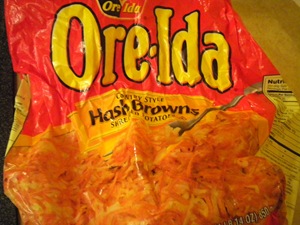 For some bizarre reason that none of us can remember, we ended up inheriting these frozen potatoes from my dad’s freezer. My mother nor I would never EVER buy them on purpose.

But they’ve been taking up freezer space for forevs. When I went to the Cooking Light website to look up “leftover Turkey” (I’d thawed some turkey we froze after Thanksgiving) they had a suggestion for “turkey patatas bravas” (which I now can’t find). Basically, you prepare frozen hash browns according to packaged directions and then toss in some onions, garlic, tomato puree, cumin, crushed red pepper, and chopped leftover turkey. I ended up adding copious quantities of hot sauce as well. 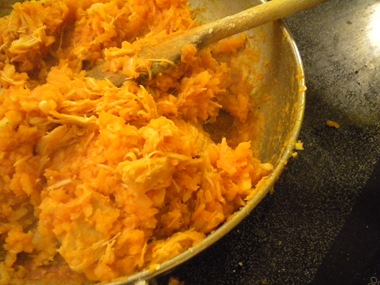 Looked like cat barf, but tasted okay, if a bit freezer burned. And now those stupid potatoes are gone! Score.

I want that pan! The deliciousness that will be cooked in that thing will be nothing short of amazing, I'm sure.

Also, love the counter-top oven. We have this super invention that is a microwave and pizza oven. Essentially, under the microwave is a small oven - it's advertised as a pizza oven, but we cook whatever in there! It's awesome!

I actually love fruitcake. My Singapore relatives send a fancy one every year, and it was so tender and sweet and nutty...now I'm regretting not going home for Christmas, because I missed out on the fruitcake!

That cake looks AMAZING! So do those "chicken" nuggets. Awesome Christmas part 2 :)

That pan is bigger than you. Ha ha a shield. But seriously a pan like this is real nice when cooking for company. Big fry jobs like making tons of meatballs. I want that pan too!

I love the look and design of that oven! Very kitschy!