So my mom, her pal, my sister and me went into DC for a fun ladies’ night and we had a great time but got SOAKED by a DOWNPOUR of rain both going to and leaving from the restaurant! Being soaking wet in dressy clothes sitting on the heavily air conditioned Metro is NOT FUN. I just took a looooooong hoooooooooot bath.

We went to Oya, a hot and happenin’ place, self described as Asian-French fusion.

We were seated near a wall of flowing water and roses. Oooh, aaah. These pictures are all flash-tastic, cause the place was DIM. 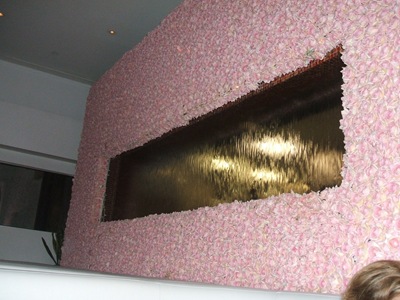 Dinner started with hot cheesy puffs, much appreciated after Downpour #1. They were pretty rockin’. Lisa Joy (my mom’s hilarious friend and coworker) kept asking for more, and more, and more. Fortunately our waiter was a good sport. They are great, though! Hot and cheesy without being gooey or greasy. I had two. My mom and Lisa Joy each probably had about six, hahaha. 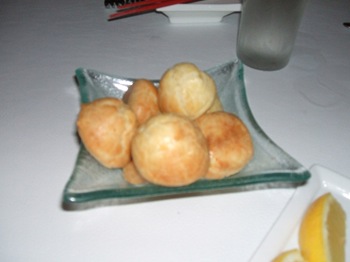 Other people got apps. I declined, since I ordered two small plates for my entree, but I got nibbles.

Ma got a butternut and arugula salad: 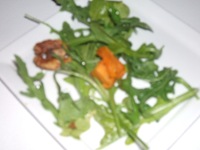 I ate the butternut (cut up too small!) and a little bit of the arugula but actually I think I am arugula’d out! Shocking! 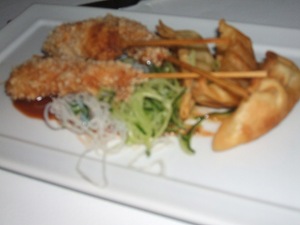 They were okay (I had 1/2 of one), but they REALLY needed the sauce they were on. Otherwise they were too bland! Lisa Joy got the tuna tempura roll, which I got a piece of and was FAB, but I was too slow to get the pic.

Incidentally, isn’t it fun eating out with people you are comfortable with, so you can get tastes off of everyone’s plates? It is the BEST and most FUN way to eat!

On to the entrees. I got the lobster dumplings: 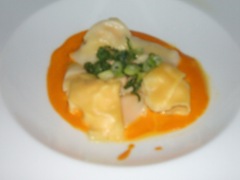 They came with carrot ginger sauce, which was QUITE creamy and sweet- definitely not as healthy as it sounded! But my oh my it was tasty. 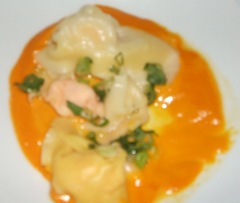 When I tried to separate the dumplings, I realized that one of the dumplings came with the filling popped out of it! They were delicate! The wrappers were quite thin. Incidentally, the filling was light, lobstery mousse. Mmm.

The other thing I got was a side order of broccoli rabe (yum!) with cherry tomatoes and “garlic confit” 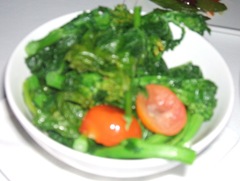 The broccoli rabe came in HUGE chunks, and the main flavor was garlic… not a lot else going on. The tomatoes were pretty awesome—had a nice caramelization thing going on.

My ever vigilant mother decided I didn’t have enough food and made me a plate of some of her stuff on the empty cheese puff saucer: 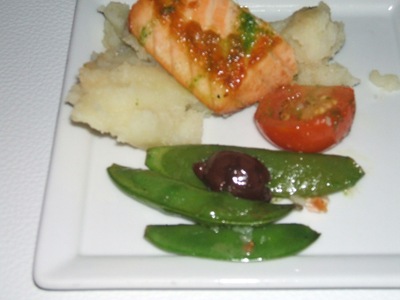 This is a small plate! Use the snow peas to gauge relative size!

The salmon was good but a bit salty. There were also snow peas with rockin’ nicoise olive, ‘mater, and mashed potatoes (I really have lost all interest in mashed potatoes of late! I only had a bite! Is it just that I know they’re so unhealthy that I just don’t bother anymore? I always sorta liked them, but maybe my newfound knowledge of the nutritional horror they wreak has just made me quit being ambivalent and straight out dislike them?).

My sister and Lisa Joy both got the scallops, which had a nice sear on them. My sister gave me half a scallop. My sister also got the soba noodles, allegedly in some fancy broth? They tasted exactly like lo mein. I don’t care for lo mein, so…

Onto dessert! My mom and Lisa Joy got some cause of the price fixe menu, and I got one cause I felt like it! Here’s mine: 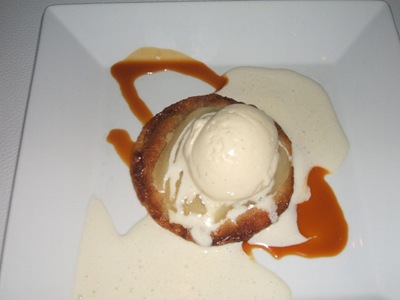 This is the “baby pear tart crumble”. The ice cream it came with (“star anise vanilla”, per the menu) gets an A+++++, but the tart itself was really uninspiring. The crust was incredibly thin and tough- hard to cut, difficult to eat, and just not really worth the effort. The pears were kind of unremarkable.

My mom got the banana bread bread pudding, which came topped with rum raisin ice cream. 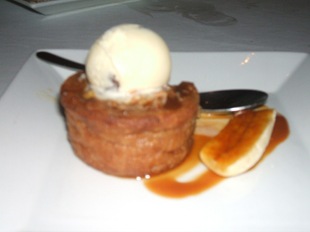 Again, just okay. The perfect pain perdu I had earlier this week has given me newly HUGELY high standards for bread pudding, but the outside of this was dry, and it just didn’t do it for me in terms of texture/flavor. The caramelized banana on the side was aight. It was good. Nice bittersweet chocolate flavor, and there were yummy crunchy bits of something in it!

There are many people in Northern Virginia who just never go to D.C., I guess because of traffic and whatnot. While it’s absolutely a pain, I do think D.C. is a special city, and I’m happy I live so close to it!

Looks like pretty good food: I've only had sushi in Oya.

It cracks me up when people in VA think DC is so far away especially when they can take the Metro :)

This horrid rain must stop!