Okay so let’s talk about potato salad. It can be really really gross if you get it from Safeway or someone’s well meaning grandmother and it’s basically mayonnaise with a few suspicious lumps floating in it. Homemade American style, ideally (how I do it) jazzed up with mostly sour cream and hardboiled eggs can be good.

But man oh man, the best everrrrrrrr is my mom’s Greek potato salad. 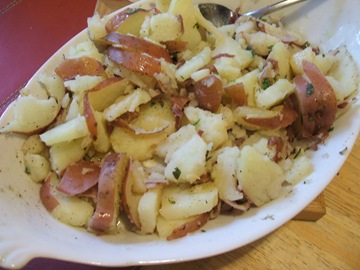 It is so. freakin. delicious. And it is SO. FREAKIN. SIMPLE.

What it comes down to is this: olive oil is delicious.

Thus, that is the source of most of the flavor. Just boil some potatoes (whole) til fork tender, then wait til they’re tolerable and cut them into thin slices. Then, WHILE STILL WARM (important), dress them with fresh herbs (we used oregano and chives from the deck and rosemary), pepper (lots) and salt, and OLIVE OIL. And red wine vinegar. 2:1 ratio on the olive oil. And don’t skimp. 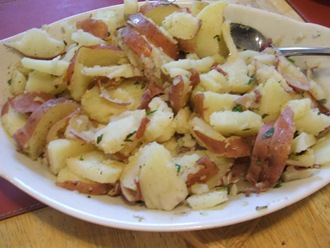 It is so simple and SO DELICIOUS. Greek potato salad ftw.

Also, hilarious, like mother like daughter: I brought my olive oil home from school cause I still had like half a bottle and that stuff’s expensive! I’ve been on a mission to finish it up (though my mom keeps forgetting and using HER olive oil). We finally did it, but lest we waste the last little teaspoon at the bottom, my mom jerry-rigged this amusing arrangement on the counter:

Draining upside down, propped between the dish soap and the sponges. Love it. 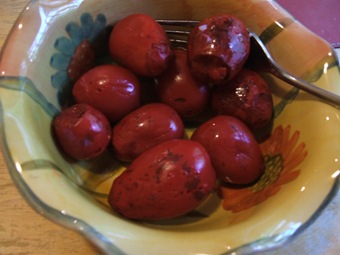 And finally, now that I’m done with the plants, the main course: recycled lamb. 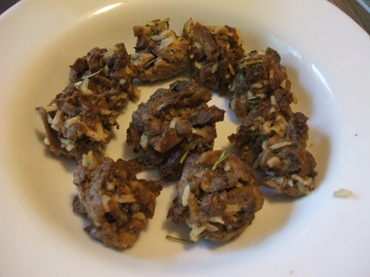 We still have a tonnnnnn of lamb leftover from Easter in the freezer, and I have been hunting for creative things to do with leftover cooked lamb (if anyone has any ideas, feel free to contribute, although it seems many readers are vegetarians. I’m definitely thinking about this).

For last night, I decided to (sort of) go with the technique described in this recipe: I tossed 1 pound of lamb (already cooked and minced) with a tablespoon or so of olive oil, a tablespoon or so of fresh rosemary, and 1/2 teaspoon ground coriander and let those flavors soak in for a few hours. Then I tossed the meat with 1/2 cup cooked rice, 1 large egg, and some of the cooking water from the potatoes. Then I formed them into balls and broiled them 4 minutes on one side (I would’ve flipped them but… they did not so much hold together hahahaha. This photo is only of the pretty ones!). 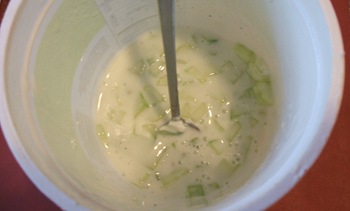 Easy tzaziki: seed half a cucumber, then chop it, salt it, and let it sit on some paper towels for awhile to let the water drain. Then I mixed it with the last of some plain yogurt (1/2 cup?) and some labneh (1/2 tbsp?) to thicken it, plus salt and pepper and (forgot til after I’d taken this picture!) about 1/2 tsp fresh dill. 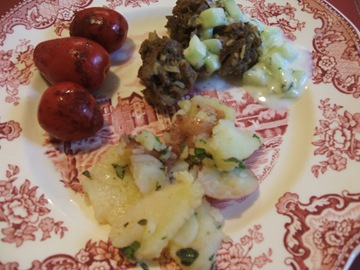 I definitely recommend making the yogurt sauce, because although the meat is really flavorful and tender, it’s just not as moist when you’re making meatballs out of precooked meat, so it’s nice having the sauce.

Confession: real, authentic Greek meatballs (keftedes) are traditionally (and deliciously) made by frying them in olive oil. And then you serve them with pasta with browned butter and parmesan. It’s a heart attack of a meal, but it’s blisssssss. 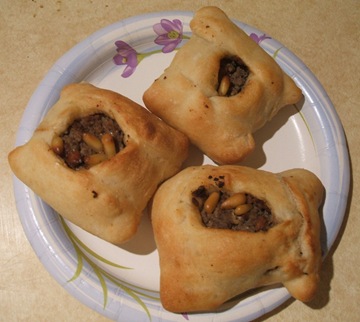 What I lovey love love, though, are the occasional fundraiser sales they have for the church where they sell spinach or (in yesterday’s case) meat pies.

The pies above are made with delicious beef, spices, and pine nuts in a hot, yeasty crust. No words. So delish!

To accompany them, I made another winner from The Philosopher’s Kitchen: kale in coriander sauce. 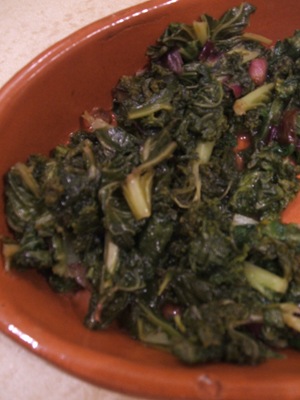 So easy, so delish: you sautee shallots in olive oil, then add vinegar, honey, and coriander to make a sauce, and sautee kale in it. Ten minutes, tops.

The Philosopher’s Kitchen is a seriously boss cookbook and I am beyond flattered that I actually inspired the lovely Astra Libris over at Food for Laughter to buy it! I think the cookbook’s author definitely owes me :D No no I jest. I owe her. Cookbook is GOOD.

On a related note, Food For Laughter is seriously amazing- a radiantly optimistic blogger who creates intensely mouthwatering recipes interspersed with amazing anecdotes about her life as a psychiatric nurse. Seriously, check it out.

i am so gonna borrow this tzatziki recipe! Looks divine and I love what you did with the leftovers

The universe is telling me to eat potatoes today. Holy cow I want that potato salad. Stat. Thanks for the inspiration, girl!

(PS-just in case you're confused, it's La from Love, La, but I'm calling myself Ilana again and I've moved blogs haha)

I'm with you that potato salad can be disgusting when done wrong. Yuck. That one looks good (and easy). Never had or even heard of pickled eggplants...

Just gazing at your potato salad also made my day... :-) I must fix this immediately!! Ahhh, and I love love pickled baby eggplants - where do you find them? My parents live near a wonderful Middle-Eastern store that carries pickled baby eggplants imported from Israel, but I haven't been able to find them here in Atlanta... but I'm probably just looking in the wrong place! :-p

Oooh, the kale with coriander sauce is on my list to fix next weekend - it sounds soooo good, and your photo makes it seem even more tempting! :-) Zach fixed the pork with apples and leeks on Saturday - WOW... So good... Thank you for the greatest cookbook recommendation! :-)

Thank you again for all your kind words, Lele! You're the sweetest!!

MMM I love lebanese food. I used to work in a lebaese restaurant so i know all about the food. I dont know where I was in life without hummus and baba ganouj by my side hehe. Happy monday :)

I was JUST looking at that Lamb Ragu recipe....wish I had some extra lamb in my freezer...although I'm "almost meatless" in my diet, I do still love meat now and then, so keep posting your meaty creations too :)

I am loving the recipes. I love Greek food and need to make it more often.

hi lele!!! thanks for popping by my blog!! : )
i love your potato salad, it looks so awesome!!
the lebanese food looks good too, you are so lucky to get exposure from all the different cultures- its so fun eating all kinds of different foods!

Those lebanese pastries look crazy good, yum!!
Baby pickled eggplant?? Never heard of it but I lurrrrrve eggplant, like woahh so i must. get. on. that!! Do tell me where to find some! :D

love that your brought your olive oil home with you.. it is expensive & i so would have done the exact same thing! plus wasting is so silly..

That's definitely my kind of potato salad, I hate mayo!! Yummm. Funny how the European cultures make their potato salad so much healthier- my mom makes the French kind with dijon! Hope you have a great Tuesday girl!

ha oh all my snacks were not that healthy that is just the only thing that got photographed... there was some chocolates and a portion of a cookie involved!

hope you are having a great night!