^^You know the rest.

Yesterday morning I was sitting at the kitchen table, doing  Sudoku, when I heard this unearthly noise coming from the front yard. I went out and in the flower bed by the azaleas was Smokeface, meowing like I’d never heard, lying down. When he saw me, he tried to pull himself up by his forelegs and made a cry of pain, and then I realized he couldn’t move his back legs.

And was like “Omgomgomg” because four years ago that had happened to our other cat, his brother, and following a frantic visit to the emergency vet he had had to be put down.

I grabbed shoes and the cat carrier and drove as quickly as I could to that same emergency vet, listening to him cry. I took him in and after the very kind doctors examined him they said he had heart disease that had caused a blood clot. When the clot left his heart, it stopped at the first place the veins diverge: his back legs. His pulse was erratic, he had fluid in his lungs, he was paralyzed in those legs, he had a body temperature of 85 (when 102 is normal for a cat) and was clearly suffering. They said the only humane thing at that point was to put him to sleep.

So they brought him out wrapped in a blanket and I, all alone, held him on my lap while the doctor very slowly and gently gave him the shots that took him out of his misery.

My mom was in a meeting so I couldn’t even TALK to her before it happened, and I knew if I waited for her to call me back, it would just mean prolonging his suffering. So this was a big adult experience that I had all alone. I feel adult, too, because it really is the end of an era. We got him and his brother when I was eight and my sister was five, right after my parents split up. Obviously, it meant something then to have something to love and be loved by.

I woke up this morning and just wanted to be comforted. Oats were clearly in order.

Today’s mix I decided to Kath it up: 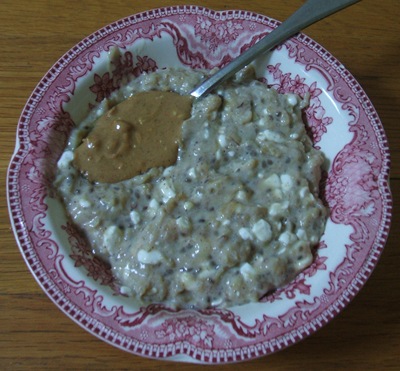 I’d been meaning to try cottage cheese in my oats for awhile since everyone raves how custardy and awesome they were. I decided to give chia seeds in oats another try (I mean why not I have like four pounds of them). So I decided to basically just copy a Kath batch. The mix:

I caramelized the banana, then added the oats, milk, water, and chia seeds. Brought them to a boil on medium, then cooked slowly until done. Then I took it off the heat, stirred in the cottage cheese, and topped with the PB.

Quite quite quite delicious. The cottage cheese does cool down the oats a bit, so if you keep your nut butters in the fridge make sure to give it some time to soften up, cause the oatmeal won’t melt it that much. But the flavor of the cottage cheese with the oats and banana was great- it tasted so rich and indulgent!

And wowwwwwwwww was I full. I did 1/3 cup of oats, less than my usual 1/2 cup, wanting to keep to the same ratio of ingredients as Kath, and I was still SO FULL- I could barely finish it! And I didn’t get hungry again for hours. 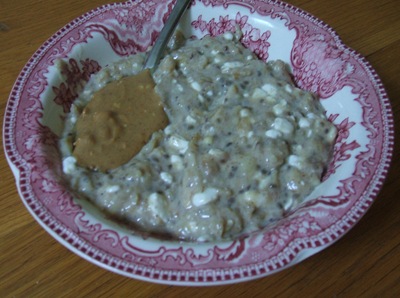 So this was one victory in my life.

Another lame thing, perhaps evidenced by the return of my dull cheap Fujifilm’d pics above…

The other night I wanted to chronicle the Spicy Ethiopian Lentil Stew I made. I was stoked about it! From the latest issue of Cooking Light, it’s a recipe inspired by one of D.C’s most famous Ethiopian restaurants (where I have eaten and enjoyed), Etete. And it was awesome!

I tried to chronicle onion caramelization, a beautiful thing, and the results were mediocre. 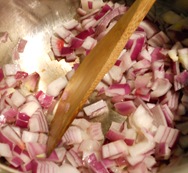 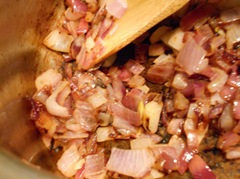 But then I COULD NOT GET A SHOT OF THE FINAL PRODUCT! I messed with settings, natural light, artificial light, closeup, far away, zooming in, macro or not… they all SUCKED.

My choices were blur (left) or bright red (right). UGH!

Query: Does anyone know of a good food blogger camera? That’s all I want. I am not rich or responsible enough to invest in an SLR. All I want is a point and shoot that does decent closeups and decent shots at night. Eesh!

I am sooo sorry to hear you had to go through that alone. I can't imagine. HUGS! I've not tried cottage cheese in my oatmeal. Sounds delish!

I'm sorry to hear about your cat. :( That sounds absolutely awful and I can't imagine having to go through that with one of my fur babies.

words can not explain how sorry I am. you did the right thing and your little buddy is now running in heaven freely and is thanking you :)

Oh, I am so sorry about your kitty. Our pets are such a big part of our lives. We lost our kitty of 14 years a year ago and it was devastating. My thoughts are with you. I want to know about the point and shoot too. I use my husband's camera that he uses for work, but I would like a little one for me. I will be thinking about you.

I am so so sorry to hear about your cat! I am sending thoughts and prayers your way. You did the best thing for him.

I'm so sorry to read about your kitty. It's so hard to lose a pet. My thoughts are with you.

thinking of you, lovely. try and celebrate the life, not mourn the death <3

I am so sorry for your loss! Try to keep your head up :)

I am so sorry about your kitty. My thoughts are with you

I am so sorry about your cat. I am totally crying right now. Even grown ups have a hard time, it is never easy. You seem to have handled the situation well and did the right thing, even though it was probably the toughest thing you have ever done.

As for cameras, mine has an awesome food setting. It is the newest Sony Cybershot DSC--W290. I love it!

There are no words that can express how sorry I am for you and your loss. Cats are so special, they are a part of the family. Take your time mourning your loss.

oh sweet sweet girl i am so sorry to hear about your horrible loss. treat yourself well this weekend!!!